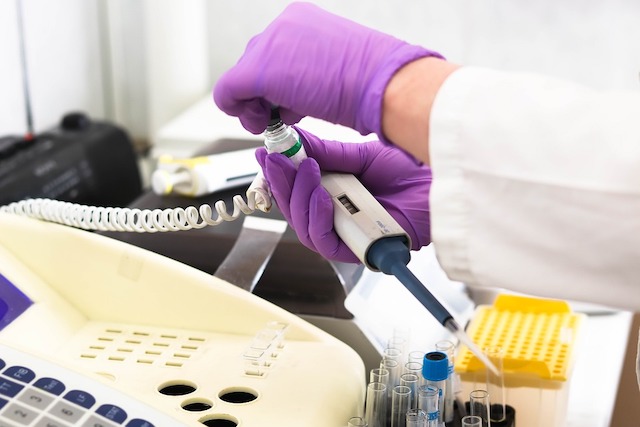 After delays and missing pieces, limited rhino-pharyngeal PCR testing for Covid-19 can now begin in the Principality.
Monaco’s Minister for Social Affairs and Health, Didier Gamerdinger, has announced that the automaton donated by the Monaco Scientific Centre (CSM) and adapted to process rhino-pharyngeal PCR tests is ready for action.
There are enough materials to carry out 150 to 200 tests to start, followed by an expected delivery of 1,000 more. After this, systematic replenishments will come into effect, ensuring that a steady stream of testing materials will be on hand.
The first tests were carried out by CSM’s Jérôme Durivault and Guillaume Groshenry before being cross-checked with the hospital in Nice. In normal practice, the samples will be taken at the Princess Grace Hospital (CHPG) and will be subject to an initial treatment within the hospital.
This makes it possible to send only the DNA and RNA of the virus, if a positive result is returned, to the Scientific Centre. This method has the advantage of not bringing the virus into the CSM, avoiding furthercontagion.
The test analyser can handle up to 30 tests at a time, taking approximately three to four hours to get final results. Having direct access to this machine is of great advantage to the Principality. Previously, it was necessary to send samples to Nice, Marseille or even Paris, prolonging waiting times by several days.
The automaton has been approved by the World Health Organisation and is simple to operate. Cartridges are placed in the machine where the tests are analysed and within hours, results can be obtained. The drawbacks are that the cartridges are expensive and currently in short supply.
Despite these issues, the tests are invaluable to the hospital, especially in cases of potential emergency situations. Due to the limited supply, only symptomatic people who are elderly, pregnant, organ/tissue donors or a health care professional can ask for the tests.
In addition to the nasal swab testing, serological and saliva tests are also being considered by the government, but probably not until the next generation come out.
Serological, or blood, tests only determine whether a person has produced antibodies to the virus, so are tricky as they cannot determine if a person is contagious or not. So far, no blood test has worked completely effectively, though researchers are working on this now.