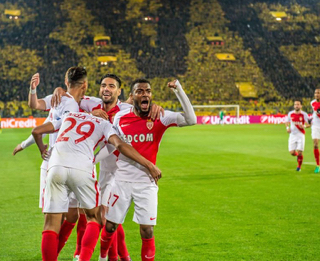 Monaco played a sparkling game at home to Dortmund in the second leg of the Champions League fixture on Wednesday night, winning a well-deserved 3-1 victory.

There had been no escape from the threat of violence in the second leg of the fixture between Monaco and the visitors at Stade Louis II.

As the Dortmund coach was held up for a 20-minute security check on the way to the game, team officials complained that this was a further blow to player morale following the pipe bomb attack on the team bus that caused a one-day delay in the first-leg game that had been due to take place on April 4.

On the field, the visitors remained in with a chance into the second half, but when Germain made it 3-1 in the 83rd minute, after replacing Mbappe just one minute earlier, all hope was lost for the plucky German side.

If there was a star of the match, it was certainly Mbappe, who left the field to a standing ovation. Falcao (17’) and Mbappe (3’) were the other scorers for Monaco. Reus scored for the visitors in the 48th minute.

All 18,523 tickets for the game had been sold, with 3,000 Dortmund fans in the crowd. Real Madrid, Atletico, Juve and Monaco are now through to the semi-finals, with the draw for the games due to be made on Friday.

Dortmund fans rally round for Monaco

Monaco come home from Dortmund, 3-2 ahead

Photo: McKlein/M-Sport[/caption] The Automobile Club of Monaco has reminded competitors in the forthcoming Monte-Carlo Rally and the Monte-Carlo Historic Rally that it is strictly forbidden to tamper with “trees, poles, mail boxes, and houses” while on pre-rally reconnaissance missions. “The Automobile Club of Monaco has received a lot of complaints from residents and  community organisations. All competitors seen to disrespect these environmental laws, will  immediately be excluded from the Rally,” the club said. The 86th Monte-Carlo Rally starts on January 22 and finishes on January 28, with a route that is 50 percent different from last year’s course. The 21st Monte-Carlo Historic Rally starts on January 31 and ends on February 7, once again pitting some of the world’s best drivers against the demanding conditions of the high country of the south of France.

Sports Staff Writer - May 6, 2019
St Etienne came from behind to beat Monaco 3-2 in Ligue 1 at the Stade Louis II on Sunday, keeping alive their slim hopes of Champions League qualification.