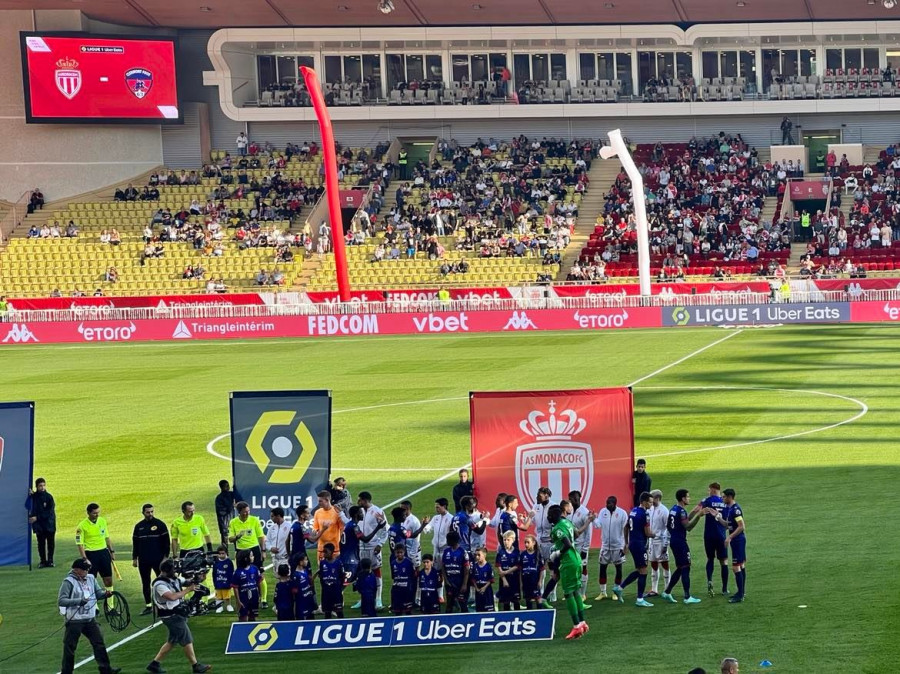 AS Monaco were shown an early red as they were held by Clermont Foot (1-1) at the Stade Louis II on Sunday – a result which extends their Ligue 1 unbeaten run to six games.

The match, as is too often the case in Ligue 1, turned on an early refereeing decision. Mohamed Camara was shown off for what on first viewing looked like a relatively innocuous challenge. However, replays showed that, without any hint of intent, he had clumsily brought his studs down the ankle of Saîf-Eddine Khaoui. Once given the VAR was never going to overturn it.

That forced Philippe Clement into action on the touchline. In response to going down to 10-men, on came Krépin Diatta and Eliot Matazo in place of Takumi Minamino and Wissam Ben Yedder. The latter was visibly perturbed by the decision, throwing his arms up in contestation once he had reached the bench.

However, the manager’s job is to make difficult decisions, and on this occasion, it was immediately vindicated. The Belgian coach decided to leave on Breel Embolo, who battled valiantly as a lone striker, bringing the ball down, bringing others into play, and maintaining Monégasuqe possession.

The Swiss international striker used his body to great effect to draw a penalty, which he stepped up to take himself. Although he missed the spot-kick with a tame effort that was easily saved by Mory Diaw, he made no mistake with the rebound to put Monaco ahead.

There was no escaping the fact that this would nonetheless be a difficult lead to maintain, and Monaco would have to battle hard for a sixth consecutive Ligue 1 victory, which would be the best current run in the French top flight.

The home side were lucky to go into the break with the lead. In a game of pinball within the Monaco box, Clement’s side survived the escapade with their lead intact. Muhammed Cham Saracevic’s effort was deflected onto the post by Alexander Nübel, Saîf-Eddine Khaoui’s effort was then saved by the torso of Caio Henrique on the line before the recovering Nübel made the save from Elbasan Rashani on the third time of asking.

Monaco’s luck didn’t hold for long. Following an err0r-strewn display in mid-week, Nübel had a solid game in goal, but there was nothing he could do about Komnen Andrić’s emphatic finish on the rebound early in the second half.

Having restored parity, Clermont lacked ambition, looking seemingly happy with taking just a point away from the Principality despite being at a numerical advantage for an overwhelming majority of the game.

Restricted to playing on the break, Monaco struggled to create opportunities against a Clermont side that never really committed numbers to the attack. Ismail Jakobs had the best chance, but his shot on the sprint was flicked around the corner by Diaw.

Mateusz Wieteska had the final chance in stoppage time. Up from the back, the centre-back’s header was powered just wide. The game finished 1-1 and Monaco slip to sixth, level on points with Rennes, who jump ahead of the Monégasques on goal difference after beating Lyon.

Post-match, Clement seemed to consider the result as one point won, rather than two points lost. “There aren’t many times that play more than 70 minutes with 10 players and still earn a point, especially after a match on Thursday night with a long journey. That’s the reality. All the players received a blow in Trabzon and they have reacted well today. After the red card, all the negative scenarios are going through their head, but they reacted well and deserved the point. Clermont didn’t create many chances.”

He continued, “We were very motivated to take the three points, to extend this beautiful run. It is still a good run, especially in the circumstances. I’m the first who wants to always win every match, against every team, but I’m also very proud of my players today and the way that they reacted… I don’t think we could have had more out of this match. At the end of the season, that could be an important point. All points are important.”

On the red card, Clement believes that the decision could have gone either way. “You can give a red for that contact. I’ve also seen yellow given. It was bad luck. The state of our pitch was also a reason [for the contact]. He slipped at this moment,” he said.

Clement’s decision to keep the Swiss striker on ahead of Ben Yedder was vindicated. The use of his physique to hold the ball up, keep possession and link the play was vital to keeping Monaco’s head above water. He was the only outlet, and the man responsible for constructing chances on the break. He assumed that role with aplomb.

The scorer of Monaco’s only goal of the match, constructed and finished entirely by his own hard work and perseverance, Embolo is becoming undroppable. He offers something different to the attacking alternatives, and he has found and secured his place in Clement’s system.