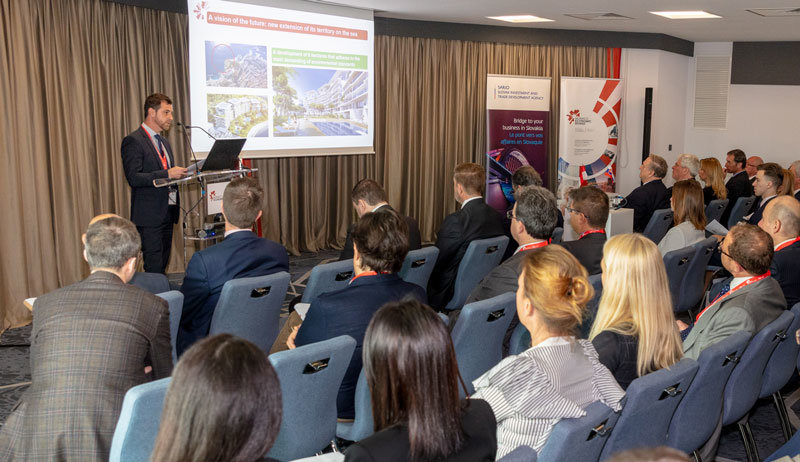 The Monaco Economic Board (MEB) has strengthened business links with Slovakia, hosting more than 80 meetings with delegates and finishing with a visit to the new MonacoTech incubator.

On Tuesday 5th March at the Meridien Beach Plaza hotel, the MEB and its Monaco Chamber of Commerce department hosted a delegation of entrepreneurs and institutions from Slovakia, led by the Slovak Chamber of Commerce and Industry and the promotional and development body SARIO. The event was attended by Igor Slobodnik, Slovakian Ambassador for France and Monaco, and provided further confirmation of the close business ties being forged between the two countries since the Trade Mission organised by the MEB to Bratislava in 2017.

The event began with bilateral presentations from both sides, giving delegates a better understanding of the macro-economics and characteristics of each country.

With a population of 5.4 million, GDP growth above 3% in recent years and an unemployment rate dropping steadily since 2013, Slovakia is enjoying a particularly favourable business climate. Although the economy is dominated by the automobile industry, other sectors are performing well including machinery and tools, electronics and ICT.

The delegation visiting Monaco represented a variety of sectors which meant the MEB, working closely with its Slovak counterparts, were able to organise a rewarding B2B session with more than 80 meetings set up for the 14 Slovak entities present. Their discussions continued in the more informal networking lunch which followed, and the day ended with a visit to the Principality’s incubator-accelerator MonacoTech.

The event strengthens relations that were forged since an Ambassador’s Lunch in 2013 with Marek Estok that was attended by Slovakia’s Minister of Economy, Mr Malatinsky. In 2015, at the opening of Slovakia’s Consulate in Monaco in 2015, the first agreement was signed with the Slovak CCI. Then in 2017, to mark the 10th anniversary of diplomatic relations between the two countries, the MEB seized the opportunity of an official visit by Prince Albert II to Slovakia to organise a Trade Mission during which a second partnership agreement was signed at the end of a highly successful visit.

The year 2019 marks a new phase. Peter Mihok, Chairman of the Slovak CCI and also Honorary Chairman of the World Chambers Federation to which the MEB is affiliated, praised the team spirit that was behind preparations for this meeting. MEB Chairman Michel Dotta added: “We are heading in the right direction; together Slovakia and the Principality have real potential to help our respective companies grow their business on the international stage”.