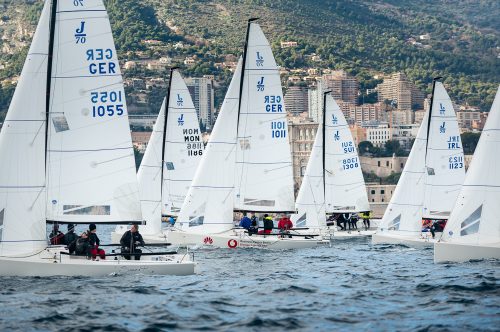 The Monaco Yacht Club’s Sportsboat Winter Series has begun with racers from all over the continent pouring in to participate.

First launched in 2013, Monaco Sportsboat Winter Series is a programme of races split into five acts with two types of one-design yachts, the Melge 20 class and the J/70 class, descending on the Bay of Monaco for intensive training and demanding regattas.

Act I, which is taking place from 7th to 10th November, will see more than twenty boats based in the Principality taking to the seas as part of the J/70 Monaco Class Association, one of the largest fleets in the Mediterranean. In all, roughly forty yachts will take part with racers from fifteen nations around Europe.

Yesterday marked the training sessions, and today the contests begin earnest. Three races lasting about one hour will be held on each day of the remaining three days, giving competitors a taste of what’s to come for the rest of the season.

A total of 45 races will be held during the five acts of the series, giving crews an excellent opportunity to perfect techniques and work out kinks in anticipation of the highlight of the programme, the Primo Cup-Trophy Credit Suisse, taking place during Act IV, from 6th to 9th February.

Monaco will be the hosts of the world championships for boats in this category in 2021.