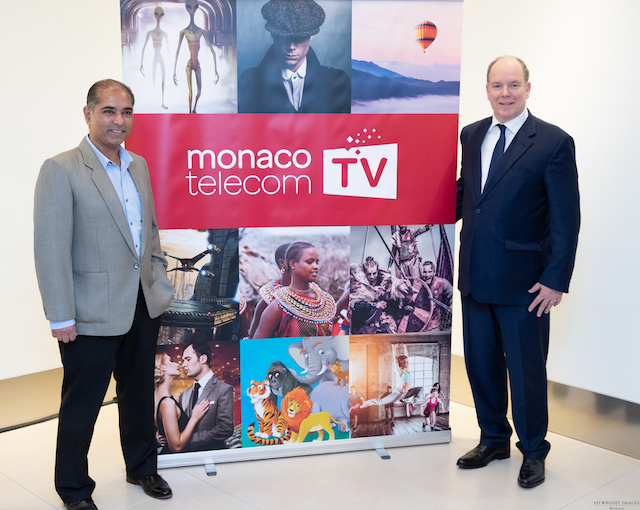 Monaco can now boast a personalised, digital television service combining traditional free tv channels with on-demand streaming, placing it in a unique position globally.
HSH Prince Albert II, representatives of the Principality’s institutions and more than 200 residents gathered at the Grimaldi Forum on Tuesday 2nd March for the launch of MonacoTelecomTV.
In partnership Apple TV 4K, the new app enables residents to enjoy their favourite series, films, photos, games and applications on the largest screen in the house.
The MonacoTelecomTV app is a new type of service designed to respond to the habits that consumers have of watching television today and falls in line with Monaco’s Extended Monaco aims.


“In our world, and especially in a country which has 139 nationalities over 2km2, the richness of the cultural offer is essential,” said Frédéric Genta, Delegate for Digital Affairs in Monaco, at the launch. “Access to the best standards made possible by Monaco Telecom is key in a country that builds its attractiveness on excellence, and this ambitious strategic partnership with Apple is fully in line with the Extended Monaco philosophy.”
The Monaco Telecom-Apple TV 4K partnership means that the Principality is now one of only a few innovative countries that is able to offer a replay service, which allows for more than 80 free channels and 130 pay channels to be played for seven days after their live broadcast.
The new service adheres to the ‘Replay Law’ that was adopted by the National Council last July as a key stage in Extended Monaco.
Programs or series can also be recorded and kept without time limit.

“It was by listening to the evolution of audio-visual uses in the Principality that we designed MonacoTelecomTV,” said Martin Péronnet, Managing Director of Monaco Telecom. “Today, everyone wants to be able to watch the program of their choice when they want and where they want. This launch is the result of a determined investment in innovation and services. We are particularly proud to have been able to partner with Apple to create this brand-new experience and put the Principality in pole position.”
Included in the new Monaco Telecom deal is a one-year subscription to other Apple TV services, such as original Apple programs, Apple Music and Apple Arcade – a subscription game service.
Apple TV 4K is also available on smartphone, tablet or computer and can be accessed on any of these devises throughout Europe.