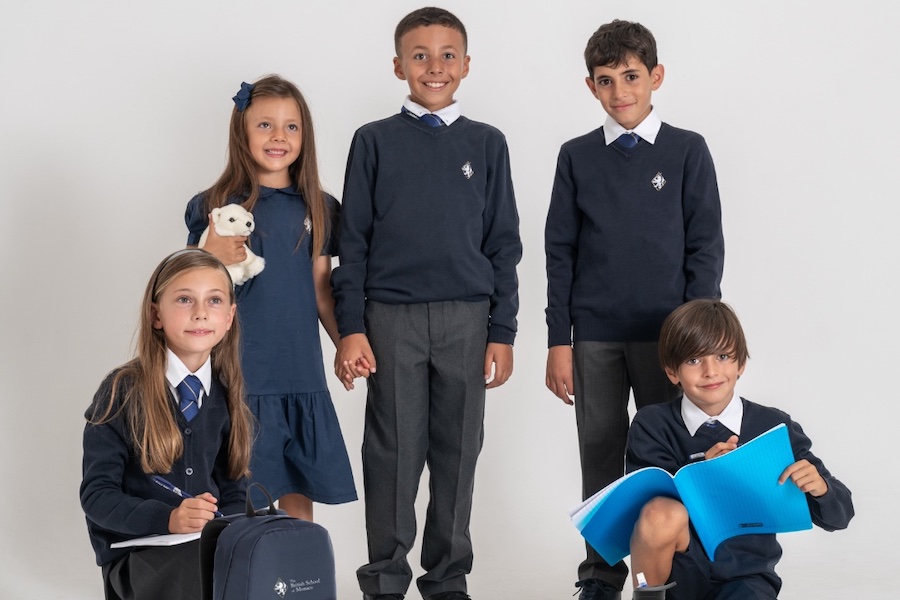 A brand new and entirely British education establishment is about to open its doors to primary students this November. Monaco Life spoke to the team behind the school to find out more.

Sapientia in Humilitate (Wisdom in Humility) is the motto of the British School of Monaco, and the motive, say co-founders Luke Sullivan and Dr.Olena Sullivan-Prykhodko, is to nurture kids to be curious, kind, courageous and capable of coping in a complicated world. The motto is designed to guide British School students to become ever-improving and lifelong learners.

The school will follow the English National Curriculum, with a strong focus on Literature and the use of English across all subjects. Significant French lessons will be offered as a first or second language on top of this. Games afternoons will be dedicated to the traditional sports of football, rugby, tennis, hockey, etc.

It adds an alternative and entirely British schooling choice to Monaco families, already served by French and International schooling systems. With an initial intake of 20 students (age five to 10 yrs), it will eventually welcome 96. Headmaster Dr. Stuart Bradley, previously Head of Primary at The Sultan’s School in Muscat, Oman, leads the teaching team.

British born and raised, Luke Sullivan grew up in London and Sheffield,and attended Birkdale School and Bristol University. He is a veteran educational entrepreneur who set up the Monaco-based private tutoring business Modelex in 2016 with his wife and business partner Olena. Olena has a background in law: In 2018 she was National President of the Jeune Chambre Économique de Monaco (JCI Monaco), and in 2021 she was international Vice President of JCI. Luke and Olena met in Monaco in 2014 and married in 2016 in Ukraine.

Says Olena, “I went to school at Gymnasium 47 in Kharkiv, Ukraine. Most people say their best years were at university but for me it was school. It was definitely like a second home for me and I have very fond memories of it. I loved English and I was quite good at Maths. Unfortunately, the school was destroyed a couple of months ago because of the war. So for me, creating a wonderful, nurturing environment with the British School of Monaco is deeply personal.”

Not only is the school entirely English speaking, it is also family run,explains Luke. “It is 100% run and owned by Olena and I,” he says. “Everything we do, we pour our hearts and souls into, and with every single member of staff we hire, we are looking for that particular individual who will fulfil the key role within this brand new school.”

Academically ambitious with a curriculum strongly focused on literature and literacy, the admissions process is designed to ensure that families are certain the school is a good ‘fit’ for them. Says Luke, “We have a straightforward conversation about the school with the family and hopefully there’s a good meeting of minds and everyone understands each other’s approach to education and values.”

The student assessment is not, says Luke, a high-bar academic entrance exam, but a way to understand the pupil. “It’s a way to get to know their level and make sure certain fundamentals are in place, because you do need those in the early years of a new school, and then making sure there is a good click between the student and the teacher.”

Along with the school values – integrity, responsibility, respect, kindness, courage, curiosity – the school aims to encourage self-reflection, resilience, adaptability and balance in its students. “In each lesson we want to focus on the ability of the student to reflect on themself as a learner and the ability to adapt success, to overcome hurdles: If they get knocked down, to get back up again stronger. We live in an increasingly polarised world with increasingly extreme views on either side of debates, and the ability to hold a balanced view seems to be getting lost in the midst of all that. We want to put this front and centre for our students as they develop their own views and opinions,” says Luke.

To create this nest of nurture and values-focused learning, the founders believe there are certain things they need to get right from the outset, and that starts with the dress code: the uniform. The pair believe it is important particularly in a place like Monaco with such a diverse range of cultures and nationalities.

The British-style uniform of navy and grey is emblazoned with a blue, gold and white school logo: a sword-brandishing lion rampant, an image that commonly symbolises courage, nobility and strength. The design incorporates both traditional and modern elements, reflecting the strong traditions that the school draws upon alongside its forward-thinking curriculum and approach to education.

Explains Luke, “One thing we want to be very clear about is the values of the school, who we are, what we stand for, so that all the parents understand what they are buying into and what they can expect from their kids’ education. Part of that is the uniform. If all kids wear the traditional British School uniform, it’s a way of standardising their appearance. This is important to us because it means the conversation can shift from what they are wearing and how they distinguish themselves through their clothes, to how they distinguish themselves through their character and behaviour. We want a school that focuses on human qualities and human characteristics.  Having a uniform is a way of moving the conversation onto those elements. It also helps students to feel part of a team and part of a community, with a strong identity defined by a clear set of values.”

The uniform includes a British School of Monaco watch designed specifically to help pupils learn to tell the time.

Attendance in the specially designed classrooms at 8am, avenue de Fontvieille, is another non-negotiable. Students need to turn up on time and attend school 100% of the time, says Sullivan. “Sloppy attendance and punctuality degrade the values of the school and set a badprecedent to other families. Once values start to degrade the institution loses its backbone, so for us we are very strict on attendance because a cornerstone of education is turning up.” There is a process in place forthose who frequently fail to make-it to the school gates on time.

The development of the school has been swift, says Luke, after years of building the foundations and refining their approach to education. “Since tutoring back in 2009, I have always just taken the most positive next step I could find. And if you always take good next steps the journey will take care of itself.”

After meeting Olena in 2014, the idea of creating a British school together began to form, and the rest of that story will now one day be part of Monégasque history.