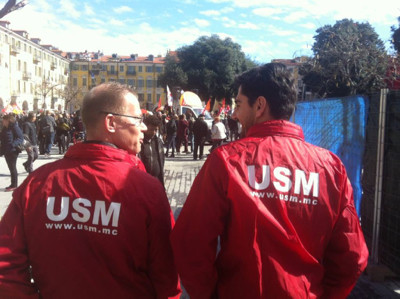 The Union of Monaco Trade Unions (USM) has announced a strike on June 22 with groups of protestors leaving from three assembly points and meeting at Place Saint Devote.

Members across a wide range of activities will take part, the Union stated.

“At a time when the authorities are working to improve the image of Monaco to display an attractive showcase in the eyes of potential investors, employees continue to suffer the effects of an ultra-liberal policy initiated since the 1980s,” the Union said.

Monaco recorded an increase of 5.9 percent of GDP per employee between 2014 and 2015, or €108,611 per worker, according to the Union, which commented: “Since employers and the government have remained deaf to the legitimate demands made during the demonstrations on June 16 and December 6, 2016, the Union of Trade Unions of Monaco again calls on all persons to act.”

USM claims that employers in the Principality have differentiated between employees, favouring some over others, “placing workers under the boss’s patronage, and trampling on their dignity”. The organisation also makes claims against working conditions that have “serious consequences for health and family life”. The Union goes as far as to say that there have been breaches of human rights in respect to trade union laws.

As USM’s General Secretary, Christophe Glasser, told Monaco Life last June, “Those taking to the streets are not anti-Monaco nor or anti-constitutional. Quite the contrary. It’s a question of dignity and social justice.”

This week’s interprofessional strike will bring together trade union officials, pensioners, and employees of the public and the private sector, with three groups leaving at 2 pm from Fontvieille, Place Saint Charles and the CHPG to gather at Place de Sainte Dévote for a speech. The Union claims there is strong support for the strike across many trades.

As with the 2016 strikes, traffic delays can be expected. For bus service, some CAM staff will be on strike between 1:30 pm and 5 pm, with minimum bus service to the hospital during this time. For a more complete bus schedule for Thursday, see CAM’s website.

Local News Stephanie Horsman - February 3, 2021
The Nice-Paris night train, defunct since 2017, is being relaunched in 2021 to the excitement of travellers looking for an alternative to long drives and carbon-fuelled airline travel.

Minister of Health and Social Affairs, Stéphane Valeri. Photo: Direction de la Communication/Charly Gallo[/caption] Minister of Health and Social Affairs, Stéphane Valeri, visited the Monegasque Institute of Sports Medicine (IM2S) on Thursday, January 12, to present his best wishes for 2017 to all staff and practitioners. The visit also highlighted the new services of the institute. On December 13, 2016, the sports centre received the accreditation of the Minister of State for the establishment of beds for Continuing Care and Rehabilitation (SSR). The clinic now offers its patients the benefit of global care including post-operative follow up with a dedicated team. Patients in Monaco, and by extension those who are insured at the Caisses Monégasques, can now benefit from the SSR. The Institute also has an immediate walk-in consultation service operating seven days out of seven. The objective of the IM2S is to allow a specialised medical examination to be carried out whatever the day of the week and to offer the possibility of surgical priority. At the end of his visit, Minister Valeri met all the staff and practitioners during an informal reception. In welcoming new staff, he said that "IM2S is an essential part of the medical attractiveness offered by the Principality". READ ALSO: Minster of Health and Social Affairs, Stéphane Valeri: the real deal