Monaco turn up for the big occasion

Monaco turn up for the big occasion 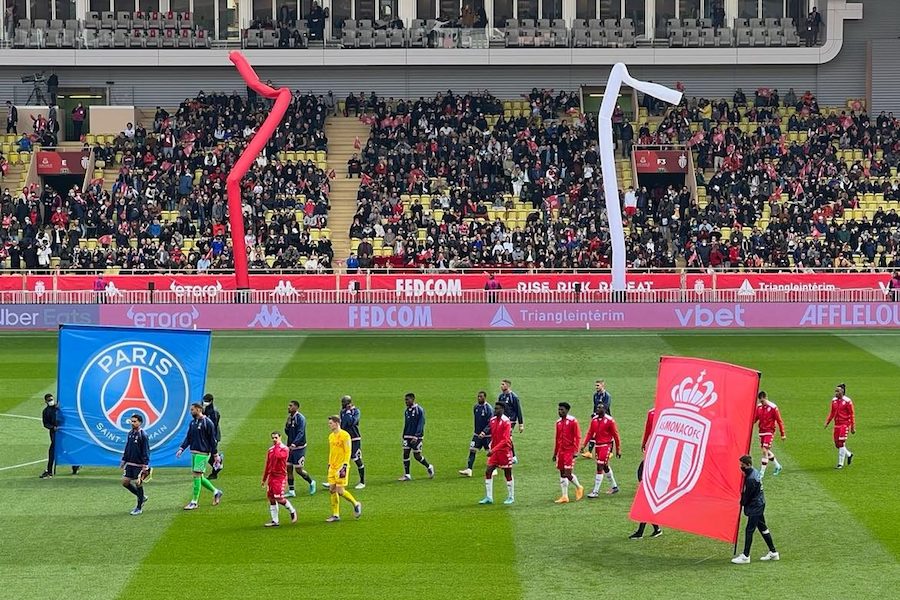 Against a backdrop of mass fan discontent, an imploding season and rumours of a mass staff clearout, AS Monaco pulled out a seasons-best performance on Sunday to glide past champions-elect PSG (3-0).

As fans flocked to the Stade Louis II on Sunday to see the PSG circus arrive in town, a banner appeared in the Ultras stand, which reminded attendees that the circus never leaves the Principality. “Welcome to the 45th Monte-Carlo circus festival,” the banner read in front of lines of unoccupied seats. The absence of the Ultras was explained soon after with another banner, which read “Like you, we’re on holiday.”

Time was called on the strike 15 minutes into the fixture, their return to the stadium audible within the stadium as an atmosphere fitting such an event broke out. Their protest wasn’t finished there, however. Throughout the encounter, seven different banners were unfurled, criticising the players and the hierarchy of the club. Only owner Dmitry Rybolovlev was exempt from their anger.

If the Ultras had been present from the beginning, they would have witnessed a Monaco team that was unrecognisable to the limp side that has taken to the field in recent weeks. Having only secured one win in the past eight matches, the player’s confidence clearly hadn’t been extinguished, as Monaco pressed a highly-talented PSG unit.

Although Lionel Messi was absent through illness, PSG still boasted a frighteningly strong line-up including former Monaco man Kylian Mbappe, who was roundly booed throughout the match.

For PSG, the issue was getting the ball up to their world class attacking unit, as Wissam Ben Yedder, Gelson Martins and co. pressed effectively in the opposition third.  It was his diligent work that almost opened the scoring, his interception and subsequent pass to Jean Lucas wasn’t finished by the latter with the goal at his mercy. A last-ditch tackle from the recovering Leandro Paredes was enough to steer the ball just wide.

Another half-chance fell to Jean Lucas and then to Youssouf Fofana, and one had the impression that if they had fallen to the prolific Ben Yedder, that the match could already have been settled as a contest.

When the Monaco captain did get his chance, he took it in typical clinical fashion. Fofana’s cross was met with a nonchalant front-post flick befitting of a player who is Ligue 1’s top scorer. PSG mustered a relatively tepid response to going behind, and although the away side went on to dominate possession and territory for the remainder of the half, a Marco Verratti shot that sailed wide of the far post was the most notable chance from a side that looked creatively defunct.

PSG’s second-half showing wasn’t much better, and although the home side accused their own players of being “on holiday” in recent weeks, it was the visitors who looked like they had come down for a vacation on the Cote d’Azur.

For a team wielding their level of talent, PSG didn’t look the sum of their parts, and although they looked dangerous on the break, they didn’t sustain any pressure on Alexander Nubel’s goal. The German goalkeeper was nonetheless grateful for Benoit Badiashile’s assistance as he cleared off the line from a scuffed Mbappe shot, with Nubel already rounded.

Monaco were happy to sit back and hit PSG on the break in the second-half, just as their opponents had done in the first period. Their fluidity and energy in transition eventually reaped its reward as Ben Yedder exploited the space vacated by the marauding Nuno Mendes. His cut-back found Ruben Aguilar, whose tame affront was diverted by a sprawling Kevin Volland, who tipped it around an already-committed Gianluigi Donnarumma.

The cherry on the cake came in the dying moments as some more energetic pressing allowed Volland to steal the ball and charge into the PSG penalty area before being felled. Ben Yedder stepped forward and made no mistake as he doubled his tally for the day.

Whereas the game started with a chorus of boos as the players (and the manager Philippe Clement) names were announced, the full-time whistle was greeted with deafening cheers. The emphatic, unexpected victory has, for now at least, changed the atmosphere around the club.

With the reports from L’Equipe on Saturday stating that Clement, Sporting Director Paul Mitchell and Vice-President Oleg Petrov are all set to be replaced in the coming days in what would be a mass clear-out of the club, there is still a cloud of uncertainty lingering over ASM.

Clement, however, continues to give his full focus to what he told Monaco Life were another nine finals (remaining number of Ligue 1 matches). “We must always look forward. All our concentration is now on the domestic championship,” he said.

As Clement admitted post-match, the only disappointment is that Monaco can’t back up this huge victory straight away, as the international break means the Principality side won’t play again until the beginning of April.