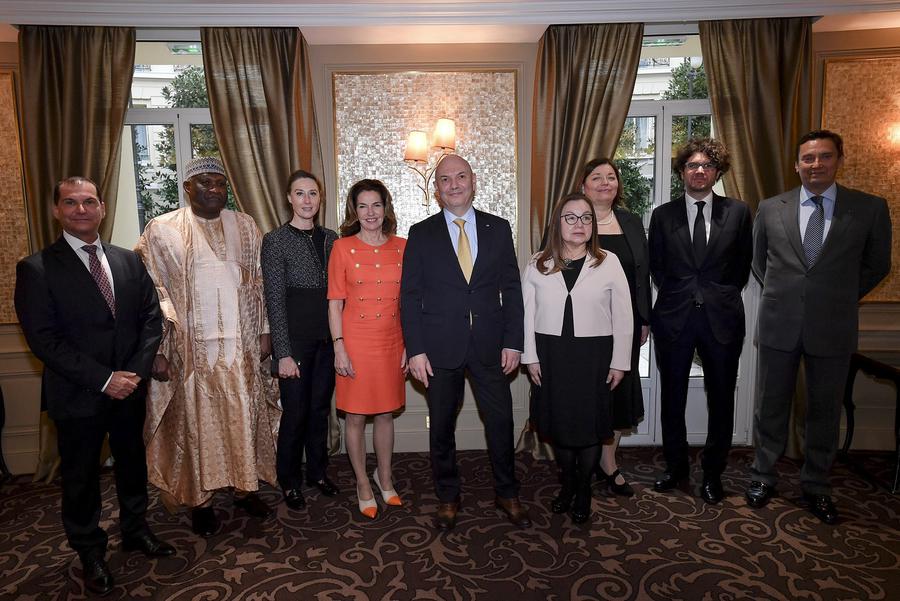 In the past weeks, Monaco has had the pleasure of welcoming seven new ambassadors and the appointment of a new general delegate of Quebec.
The first of the new ambassadors, from Slovenia, Peru and Niger, as well as the General Delegate were greeted on Monday 2nd March. Minister of Foreign Affairs and Cooperation Laurent Anselmi held a lunch at the Hotel Hermitage after their letters of accreditation had been given to HSH Prince Albert II.
After completing a degree in Economic Sciences, Metka Ipavic began her diplomatic career at the Ministry of Foreign Affairs of the Republic of Slovenia in 1992.
Cristina Ronquillo De Blodorn joined the Department of Political Affairs in Peru in 1976 and held posts within the Ministry of Foreign Affairs and at various embassies, including in Europe.
Having joined Niger’s Ministry of Foreign Affairs and Cooperation in 1987, Ado Elhadji Abou was appointed Head of the United Nations and International Conferences Department before being promoted to Director for the Middle East and Arab Nations.
An economist by education and an associate professor at HEC Montréal, Michèle Boisvert was Executive Vice-President, Business Outreach at the Caisse de Dépôt et Placement du Québec (CDPQ) investment fund, while also serving as Executive Vice-President, Public Affairs and Strategic Communications from 2012 to 2015.


The next group of ambassadors, from Estonia, Cape Verde, Angola, and Andorra, were received the following Monday 9th March. Laurent Anselmi held another lunch at the Hotel Hermitage following the official ceremony with the Sovereign Prince.
Clyde Kull joined the Ministry of Foreign Affairs in 1991 as a political advisor. He was appointed as Estonia’s Ambassador to Belgium, the Netherlands and Luxembourg in 1992, and has also served as Ambassador to Germany and to Tunisia.
Deputy Chief of Staff to the President of the Republic of Cape Verde in 1991, Hércules do Nascimento Cruz was appointed Head of the Department of Legal Affairs and Treaties in 1992, then as Head of Human Resources for the Ministry of Foreign Affairs.
Joao Bernardo de Miranda has served in a number of roles within the Angolan Government, including as Deputy Minister for Information, Minister of Foreign Relations, Member of the National Assembly and Governor of the Province of Bengo. He was involved in the Angolan peace talks and was the African Union’s Special Envoy to Guinea Bissau. He is also a founding member of the Angolan Union of Journalists and has written three books.
A career diplomat, Eva Descarrega Garcia began as Minister-Counsellor and Chargé d’Affaires ad interim at the Principality of Andorra’s Embassy to Liechtenstein in 2003, and subsequently to Switzerland, Finland, Norway, Iceland, Sweden, Denmark, Russia and the countries of the East, and to the Holy See.