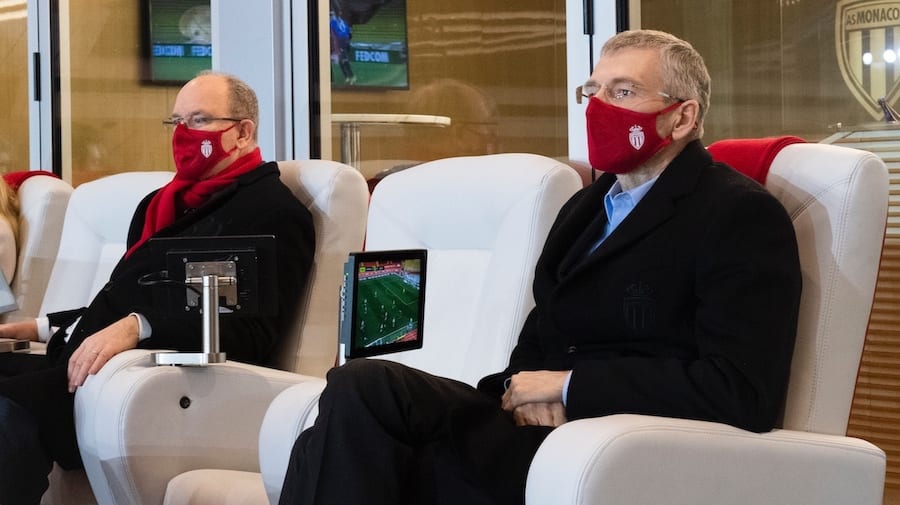 Prince Albert watched on at Stade Louis II as AS Monaco beat cross-town rivals OGC Nice in the 100th Côte d’Azur Derby, making it their sixth straight victory in a row.
Wednesday was a banner night for the Red and Whites who played an at-home game against OGC Nice for the 100th time, winning two to one and making it six in a row for the team. To top it off, both Prince Albert II and Club President Dmitry Rybolovlev watched it happen from the Loge des Lègendes private box.
Coach Niko Kovac opted for the same 11 players as in Sunday’s game against Nantes. Things picked up rather fast, and in the 6th minute Team Captain Wissam Ben Yedder made the game’s first attempt with an assist by Kevin Volland. Though it didn’t hit the mark, it set the tone for the night, though no points were scored until almost the half hour mark.
At 28 minutes in, Ben Yedder put one between the posts, racking up his 10th goal of the season and sending the team back to the locker room at halftime with a 1-0 lead.
The second half proved more exciting with Nice’s Jeff Reine-Adélaïde’s attempt, picked up by teammate Pierre Lees-Melou who snuck past Benjamin Lecomte for the goal. The score evened up and the pressure was on for both sides, though not for long.
Just three minutes later, Sofiane Diop was fouled by Jordan Lotomba, resulting in a free kick that was taken by the star of the night, Ben Yedder. His brilliant kick found its way to the top centre of the posts, putting Monaco back in the lead at 2 to 1.
After this, both teams had a few more attempts, but no one was able to convert, so when the buzzer went off signaling the end of the game, Monaco was able to breathe easy.
“We wanted to win this 100th derby,” Coach Kovac said after the match. “It’s good for us, for the club, and for the supporters. We deserve this victory.”
Even with the win, Monaco is still three points off the top three in Ligue 1, and have some serious contenders to get past to reach the uppermost tier. For this reason, Coach Kovac isn’t ready to let the team rest of their laurels just yet.
“We must work on preserving this lead or even extending over the sixth-placed side. We are building a squad, a team. We have 15 matches left and we are progressing step by step. I don’t want to talk about the podium.”
AS Monaco’s next match is Sunday afternoon at the Stade des Costières against Nîmes.

(Monaco Life with AS Monaco press release, photo of Prince Albert and Club President Dmitry Rybolovlev by AS Monaco)