HE Jean-Luc Van Klaveren, Ambassador of Monaco in Spain, held a reception on Tuesday, May 15, in honour of the Ballets de Monte-Carlo who were presenting Le Songe at the Gran Teatre del Liceu in Barcelona, from May 16 to 19.

At Casa Fuster, the Ambassador, accompanied by diplomats and the Honorary Consul General of Monaco in Barcelona, invited local personalities, including the Lieutenant General of the Civil Guard, the head of the Police of Catalonia, and the head of the Catalonia airline administration, Agatha Ruiz de la Prada.

Also present at this reception were 29 foreign consuls stationed in Barcelona. The event was an opportunity for the Ambassador to welcome his guests in a very friendly atmosphere and to present to them the excellence of Monegasque culture.

On Wednesday, May 16, the first of the five performances of Jean-Christophe Maillot’s Dream was greeted with a standing ovation by a full house at the Gran Teatre del Liceu in Barcelona.

Following the show, HE Van Klaveren and his guests participated in a cocktail, organised by Monaco’s Tourism and Congress Department, during which they met Jean-Christophe Maillot, Choreographer and Director of the Ballets de Monte-Carlo, as well as the dancers of the Company, in a relaxed and warm atmosphere.

Local News Nancy Heslin - May 30, 2017
[video width="1280" height="720" mp4="https://monacolife.net/wp-content/uploads/2017/05/paulawaterbike.mp4"][/video] To make the coolest charity challenge, combine a cause, like “drowning claims a life every 85 seconds”, with the Princess Charlene of Monaco Foundation that was set up in 2012 to address “one of the greatest silent killers on our planet” by teaching children essential water safety skills and how to swim. Add some worldwide awareness to the cause with one crazy sport event, the Riviera Water Bike Challenge on June 4. The 21-km relay race will involve ten teams of five, who will pedal on Schiller S1 water bikes, what Luxury Travel refers to as “This Bizarre New Watersport Is Taking Over the World”. The idea comes courtesy of Gareth Wittstock, Princess Charlene’s brother, and the choice of a relay is the embodiment of teamwork and team spirit. Throw into the mix a desirable destination where the event will be held: Mediterranean Sea. The relay will start at Plage Nikaia in Nice and wind along the coast until it finishes at the Monaco Yacht Club. [caption id="attachment_16615" align="alignnone" width="640"] 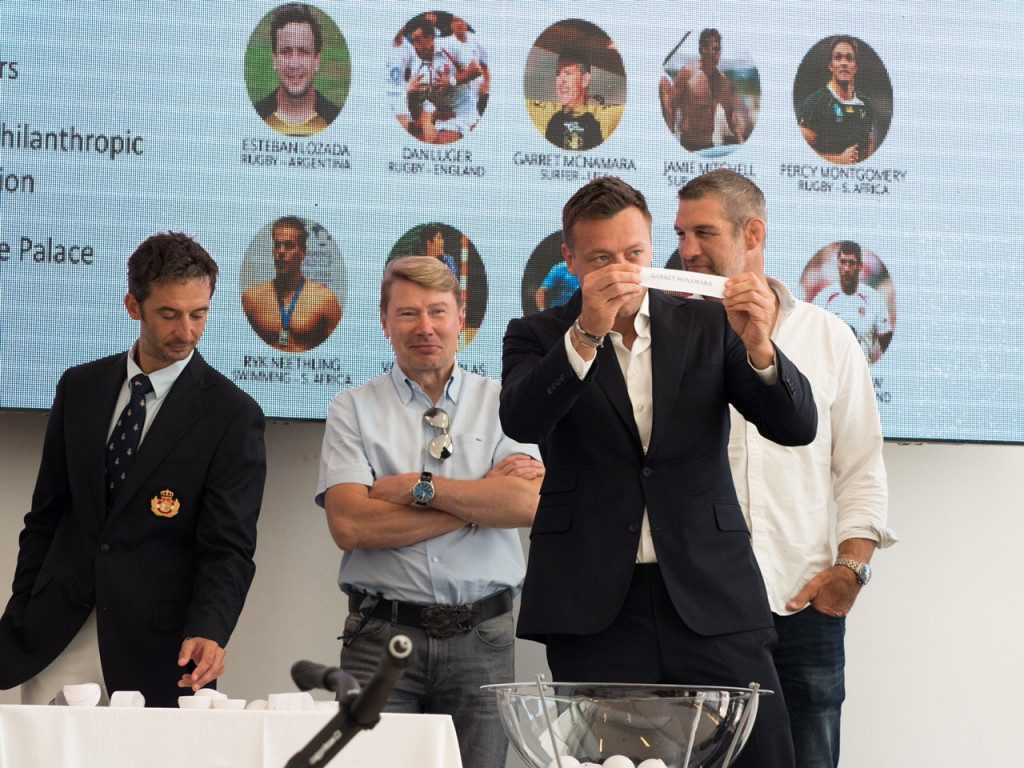 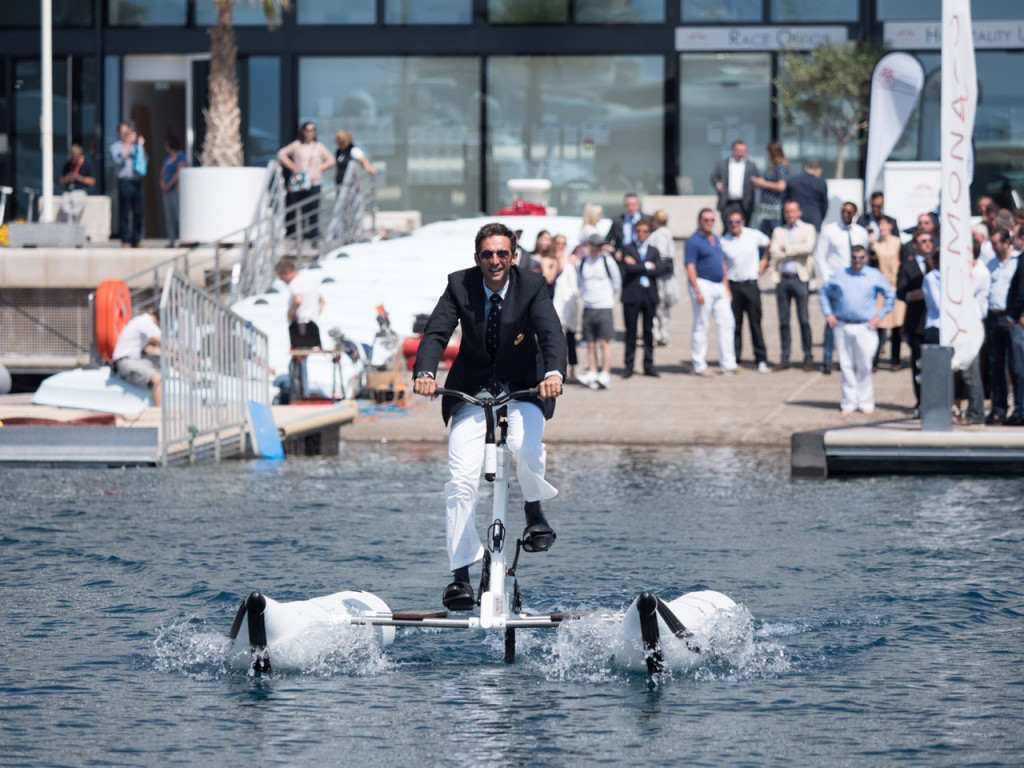 Photo: Eric Mathon/Palais Princier[/caption] Spice it up with 20 major sports celebrities, say F1 drivers, rugby giants and Olympians – with two stars assigned to each of the ten teams – and have as many as possible be on hand for the entertaining team draw press junket at the Monaco Yacht Club, where they will take the shiny Schiller S1 for a test drive. Toss in a few choice team names – like COCC, Slammers and Monaco Police – for attention-grabbing Riviera Water Bike Challenge headlines. 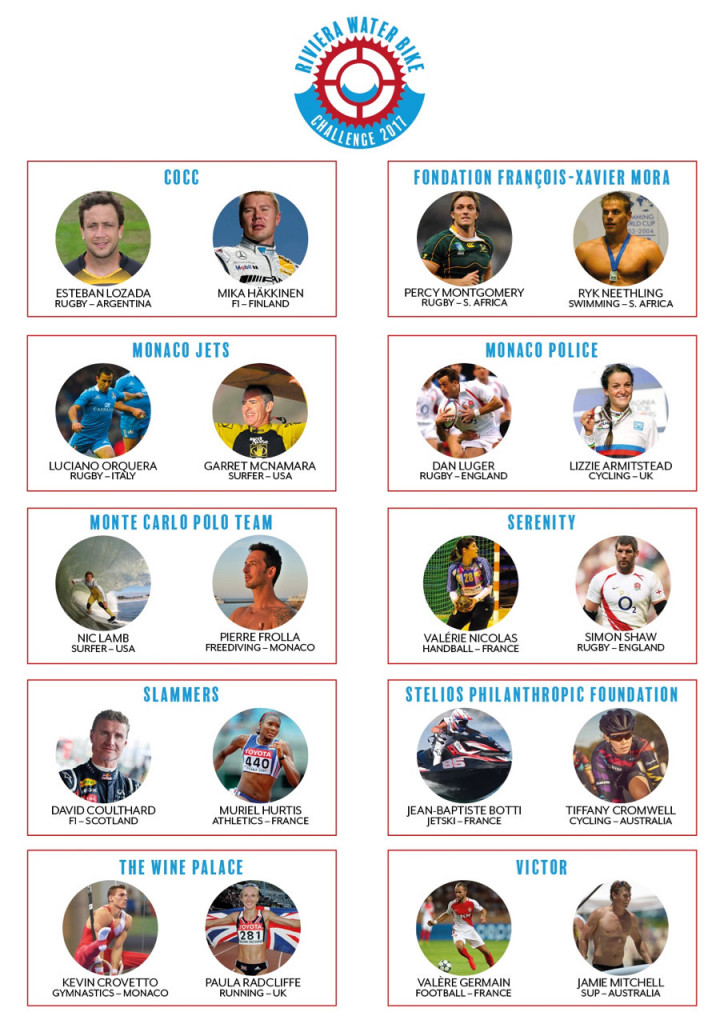 Let set until June 3 when the teams will come together for the first time at the Monaco Yacht Club. Over a barbecue meal and beverages, they’ll discuss tactics for following day’s race, remembering the rules: one sports celebrity must start the race, and the other finish. The three additional team members, who will be following the water bike in an inflatable boat, can pedal as much or as little as they wish. Mix all these together, along with a fundraising Gala that was held in March 24 at the Monaco Yacht Club, and you have a recipe for success. The June 4 Riviera Water Bike Challenge will help finance the Princess Charlene of Monaco Foundation’s project in Burkina Faso. In partnership with the Monaco and Burkinabe Red Cross, they will transform the Monegasque Pavilion from the Milan World Expo 2015 into a centre to train lifeguards and swim instructors, as well as operate as a first aid and CPR unit, which will focus on countries in the West African region. Article first published May 15, 2017.