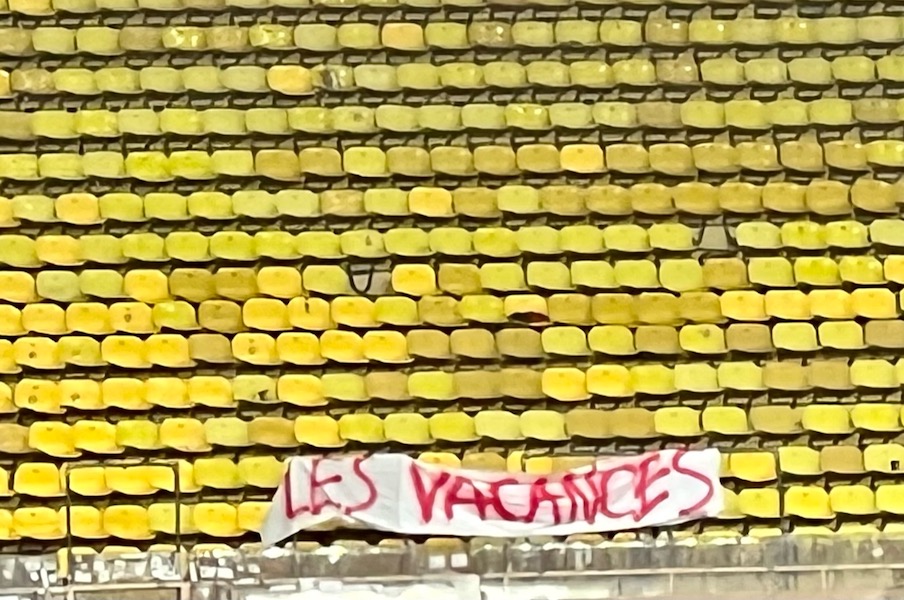 A lacklustre draw against Braga (1-1) on Thursday consigned the Principality side to a 3-1 aggregate defeat in the Europa League as the walls came crashing down on a season that promised so much.

The fans at the Stade Louis II left no room for mis-interpretation as they unfurled their pre-game banner, which read, “Qualification or holidays: it’s up to you to decide”. Crashing out of the Coupe de France and losing ground in the fight for the Champions League spots, it was clear that this was a do-or-die moment in AS Monaco’s season.

In losing, many now believe their season has met a premature end and, with no prospect of silverware, fans must now console themselves with a scrap for the Europa League/Conference places for the remainder of the season – not exactly blockbuster.

It was not simply the defeat, but the manner of it that grated with many of those in attendance. Post-match, Phillipe Clement defended the desire of his players, saying, “The motivation was there, but the belief seeped away after the first goal. There was the possibility to do more. To come back, you need to score first, and score quickly. After the goal, the intensity dropped.”

It was once again Abel Ruiz who scored in the opening minutes during the first-leg, who haunted Monaco once again. His deflected shot mid-way through the first-half wrong-footed Alexander Nubel to give Braga what felt like an unassailable three goal advantage on aggregate.

During an expletive-ridden post-match press conference, Nubel was clearly disappointed with the goal, as well as the way the game panned-out, but didn’t believe he could have done more to keep the shot out. “At the end of the day, I couldn’t do any more. I tried everything,” he said.

Following that setback, Monaco seemed unwilling to change their approach. Given the wealth of attacking talent on the field, one can’t help but think that, offensively at least, they aren’t the sum of their parts. Whether they are building slowly through the phases or playing direct long-ball football, the outcome was the same. This has been a recurring theme in recent weeks as Monaco have failed to break low-blocking sides.

The long-ball football in particular was met with strong disapproval from the home fans. The insistence of the Monegasque centre-backs to repeatedly launch easily-repellent long passes was met with jeers in the second half – the definition of madness is doing the same thing time and time again and expecting a different result. While the tactic worked wonders against Lyon’s high-line a few weeks ago, it never looked like causing any issues for Braga’s low defensive block.

The second-half was played at a fairly pedestrian pace that more closely resembled a pre-season friendly than arguably Monaco’s most important match of the season. A triple substitution, which saw the introduction of Aleksandr Golovin, Myron Boadu and Guillermo Maripan failed to spark a revival.

With Monaco’s fate sealed, fans began heading for the exits with 25 minutes to spare, though those who stayed made their disapproval known when Axel Disasi thundered in an equaliser in the final moments.

Those boos were amplified in volume at the full-time whistle, whilst a modified version of the pre-game banner now just read “holidays”, providing a visual representation of their anger. When the stands had emptied completely, the banner took on a symbolic resonance of a season that ended prematurely.

Having tasted European football, Clement told Monaco Life that there is much work to be done if they are to travel the continent next season. “Everything is still possible, but you have to react, that is clear. We can’t have our heads down. We have to respond in the 10 matches, not only against PSG, but in the nine matches after.”

With the visit of champions-elect PSG on Sunday, those signs of revival will have to appear under the toughest, most pressurised of circumstances.