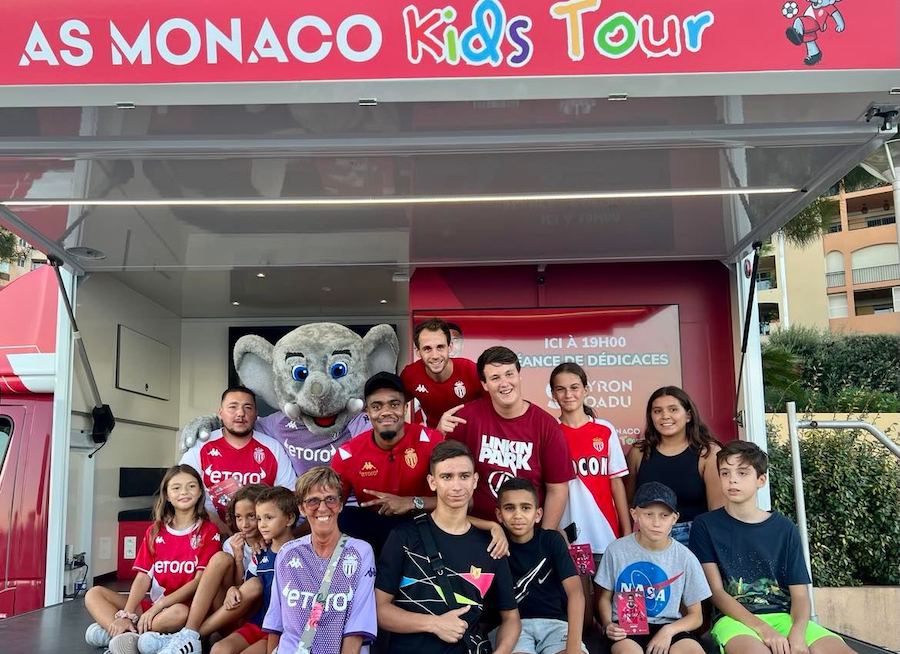 AS Monaco striker Myron Boadu delighted fans on the Digue de Fontvieille on Sunday for the first stage of the club’s ‘Kids Tour’.

One of the most supported clubs in France as well as Europe, AS Monaco’s new programme looks to strengthen local ties by travelling to neighbouring villages and promoting not only the club, but the sport of football itself.

As Monaco CEO Jean-Emmanuel de Witt said, “We have to create a link so that young people have a good image of football. That’s the first thing, we want to develop this good image. The Principality of Monaco believes in the role of sport as an educational tool. There is that aspect that is very important for us, and also the aspect of creating future fans and creating this friendship between the club and young people.”

Whilst each step of the tour, which is set to continue this week, will be unique in its offerings, things couldn’t have got off to a better start in Fontvieille on Sunday. Children descended for an event that lasted nearly five hours. There were multiple activities including quizzes, which gave those in attendance the chance to win tickets to  Sunday’s match as well as Thursday’s match in the Europa League against Ferencvaros.

It also provided young fans the opportunity to meet the club’s mascot Bouba, Jonathan Paul, Monaco’s freestyle football champion in 2018, and even Boadu. The Netherlands international striker marked his appearance by chatting to fans, signing autographs and taking pictures.

As well as the ‘Munegu Family’, which has returned this year after a two-year absence due to Covid, the club’s latest scheme seeks to boost the popularity of the sport, and the club, and encourage attendance at the Stade Louis II.

De Witt told Monaco Life, “The ‘Munegu Family’ is part of a more global strategy. We hope to create links with our fans, no matter what age, and have targeted approaches. Taking into account the current context, having a secure stadium, where you can come as a family with the youngest kids without worrying about security is something formidable and I hope it is something that will define AS Monaco relative to other clubs.”

After a successful start to the ‘Kids Tour’ the club will next travel to Saint-Martin Vésubie on Saturday, before a more local trip to Cap d’Ail on Wednesday 21st September.