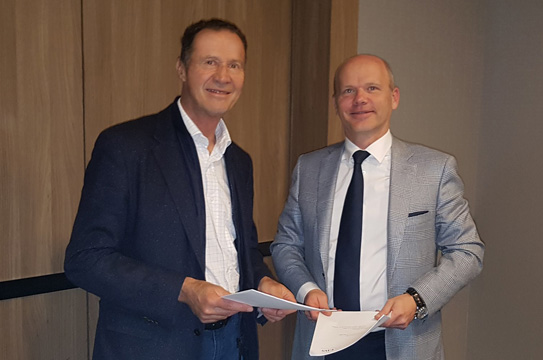 The Monaco Federation of Athletics and Slovenia’s EBS Group have announced future cooperation to last into the foreseeable future. The partnership will target the development, promotion, marketing and positioning of the International Athletics Meeting HERCULIS EBS, which is part of the IAAF Diamond League, the world’s elite circuit of one-day invitational athletics meetings.

The EBS Group is a Ljubljana-based company with expertise in business development and marketing, successfully empowering fast-growing, globally expanding, and trendsetting businesses, the company says.

EBS Group CEO Gregor Bencina states: “Just like athletes on the track and field who constantly search for excellence, here at EBS Group we strive for perfection in the field of business development, investments and value creation for our partners. In the time of constant change, innovations and digitalisation, we are looking forward to be part of the most traditional sport. We are ready to transform one of the greatest events of its kind and get the Herculis EBS ready for a new era.”

HERCULIS EBS allows the athletes to compete in a unique atmosphere that is shown in the remarkable level of achievements they achieve. This creates distinctive characteristics for HERCULIS EBS, said Meeting Director Jean-Pierre Schoebel, who looks forward to the new partnership: “The team behind HERCULIS EBS is very happy to have a new title partner on board. As we do in athletics, the EBS Group accepts nothing less than the best in their field of expertise, so I believe that HERCULIS EBS is entering even brighter decades”, Jean-Pierre Schoebel said.

HERCULIS EBS has been ranked the best one-day athletic meeting in the world five times, in 1998, 2008, 2011, 2014 and 2015 and has been a part of the IAAF Diamond League since its creation in 2010. HERCULIS EBS is, as well, one of the major and most recognisable sports events in the Principality.

HERCULIS EBS will be celebrating its 30th anniversary this year on July 21, with the announcement of the star athletes coming to Monaco’s Louis II stadium track still to come.

Mo Farah to compete at Herculis

A book to celebrate 30 years of Herculis

shares
SHARE
Facebook
Twitter
Previous articleTues. May 2 – Lecture “A century of art in Africa, a collection in the present, a continent of the future” by André Magnin
Next articleMonaco’s New York Tourist Office emphasises eco credentials
Staff Writer

AS Monaco Basketball couldn’t hold onto their winning ways in Nanterre where they suffered a 79 to 86 defeat on the opponent’s home turf.

AS Monaco Basketball was on their home turf this weekend taking on Boulazac-Perigord, beating them handily 76 to 69.

The Roca team have found their mojo once again after a three game losing streak, defeating BCM Gravelines-Dunkerque on their opponent’s home turf.

Local News Stephanie Horsman - November 5, 2020
AS Monaco Basketball’s season has ground to a halt this November, however organisers are hoping to have games broadcast live to keep the team spirit alive.