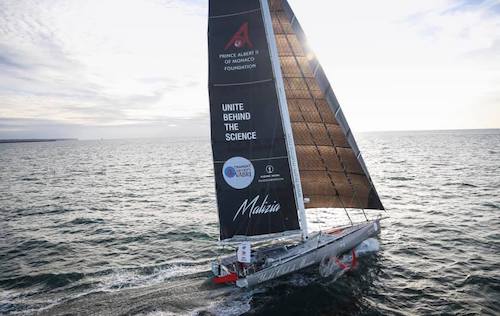 The Malizia II, best known for its recent Atlantic crossing with teen activist Greta Thunberg from Plymouth to New York, is out on the high seas once again.

Crewed by German Boris Hermann and Englishman Will Harris, the Malizia II is racing in the 14th edition of the Transat Jacques Vabre, a race following the famed coffee route from La Havre to Salvador de Bahia, Brazil.

The vessel set sail last Sunday and is being supervised by the Monaco Yacht Club’s Vice-President Pierre Casiraghi. They are currently off France’s west coast and are in 10th place out of 29 competing boats in the Imoca category.

The race will no doubt be exciting, but it also serves as a dry run for the Vendée Globe, the solo, non-stop around-the-world race founded in 1989 by Philippe Jeantot, which takes place every four years and will next be run in 2020 with Mr Hermann at the helm.

This race also carries important environmental impacts, as the sailing ship will travel without emitting any CO2 owing to two hydraulic generators and two 1.3kw solar panels which will run all operating systems. Additionally, the boat is kitted out with ocean sensors that allow data to be gathered regarding CO2 levels in the seas at different points throughout the voyage.