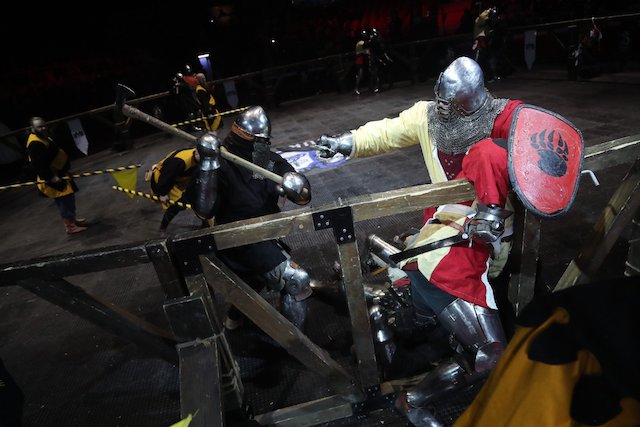 Knights in shining armour, clashes between heroic warriors and gallant chivalrous acts were alive and well for one day only last Saturday at the Buhurt Prime medieval combat championships played out under the Chapiteau in Fontvieille.
Ten international teams gathered for the event which featured ten-minute rigorous combats. Groups of five against five opponents battled it out in a modern medieval showdown where hand to hand combat ruled and swords, shields and axes flew with wild abandon in a specially made round arena reminiscent of times long since passed.
The armour and weaponry were completely historically accurate, crafted according to designs from the Middle Ages. The fighters had one goal: to stay on their feet. To hit the ground meant the player was vanquished. In addition to the need to stay upright against opponents, they also had to avoid obstacles, such as fallen comrades, in the ring. 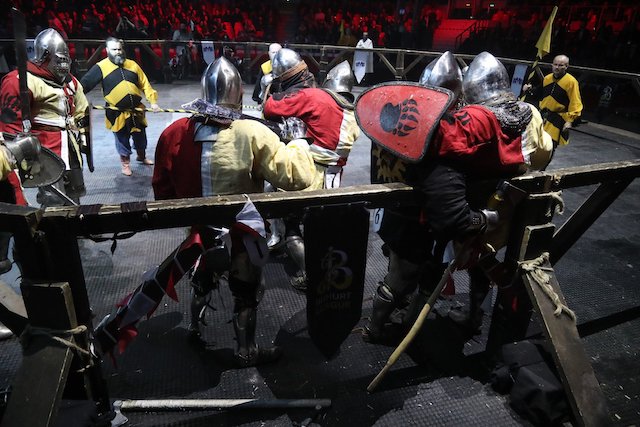 The protective gear worn by the fighters was not allowed to be taken off at any time during the matches. The rules on this were stringent and the referees extremely attentive, ensuring no one got seriously injured.
By the time the combatants reached the semi-finals, they had already endured a long day of fighting, but the excitement of the spectators ratcheted their intensity up a few notches. The last four teams standing were Bear Paw, Old Friends, Western Tower and White Company.
Bear Paw took out Old Friends and Western Tower defeated White Company, leading to an all-Russian finale. In the end, it was Bear Paw who came out the victors, followed by Western Tower with Old Friends taking third.
Buhurt Prime was sponsored by Monaco’s boutique jeweller Vitale 1913, who created the medals and awards for the exciting competition.
“We were excited to sponsor this event for different reasons,” Alberto Vitale told Monaco Life. “Firstly, both my grandfathers – Alberto Vitale and Domenico Brizio – were knights for the Catholic Church, and secondly I personally believe that, in our era, we should remember the value of the Middle Ages.”