AS Grand Prix vibes reach fever pitch, Monaco’s own Bond international, RS Simulation and iCrew Services are partnering-up to bring a thrilling F1 simulator experience to the Principality, on the biggest screen you could ever imagine.

“As with most things, we like to do something that we think has not been done before,” Bond Management Director Will Faimatea tells Monaco Life.

What they have created in the Samsung Lounge is certainly something that hasn’t been seen, or experienced, in the Principality before. The enormous, ultra-modern, electronically advanced screen by Samsung, dubbed “The Wall”, is a must-see in itself. Pair that with a €42,000 SectorOne professional simulator created in partnership with Scuderia Alpha Tauri’s F1 driver Pierre Gasly, and you have a seriously immersive racing experience.

This “eye-catching” synergy between Bond and RS Simulation Monaco was born out of a chance meeting between Will Faimatea and Jonathan Mareschal, business director of RS Simulation Monaco. Having seen the capacities of the simulator on a 50” screen, Faimatea immediately saw the potential to maximise the product and bring it to a larger, more advanced screen.

“The Wall is suited to fast moving actions, which you get driving on the simulator because we’re driving through Monaco and the background is changing at a very high speed,” says Faimatea.

The Wall is often used to show sporting events and movies, but the addition of the simulator will allow guests to engage in an exclusive, unforgettable experience. 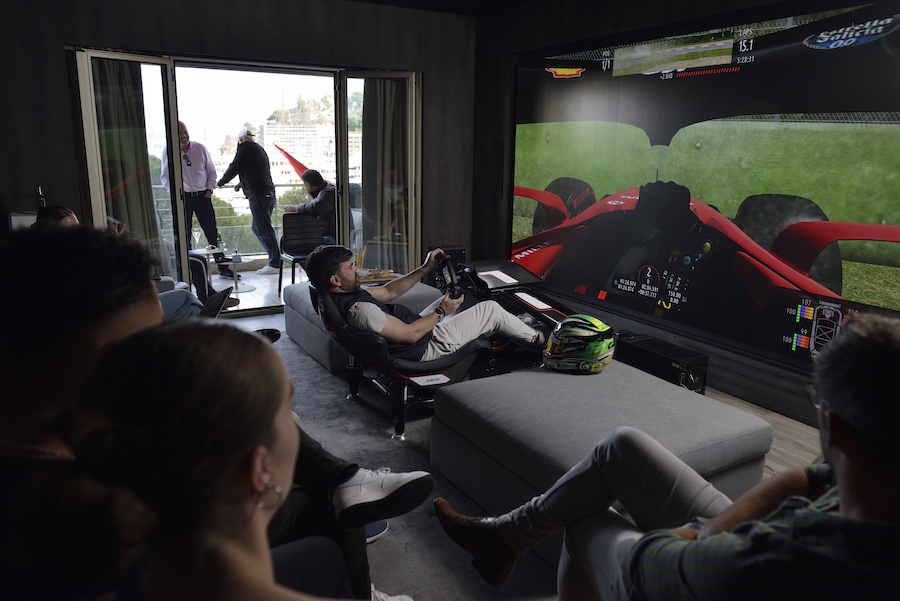 The SectorOne simulator itself is the first compact simulator born from real racing, from the work of race engineers using simulation as a tool in the racing industry to answer an increasing demand of professional drivers wanting to work/train at home. They include Formula 1 driver Pierre Gasly, SectorOne’s main ambassador, a racing enthusiast eager to use the ultimate simulation technology, as performant as luxurious.

The SectorOne was inaugurated in 2019 with Pierre Gasly on a yacht in Monaco, whilst a whole host of other drivers such as Nico Hülkenburg, Nico Rosberg and Jean Eric Vergne have also tested what the simulator has to offer. It is “a state of the art compact simulator to live the race at its best,” according to Pierre Gasly.

Simulators are nothing new. They’re well-known for gaming and sim racing. You can often go to racing events around the world and try them out, but it’s normally on a small screen and they’re a cheap set-up designed for the general public.

Jonathan Mareschal says RS Simulation wants to offer people more than a game from a simulator experience. “Since 2013, RS Simulation Monaco has developed professional simulators for professional racing teams, and as the general public cannot access anything like this, we aim to provide them with a taste of real racing with luxurious finishing,” says Mareschal.

The focus of RS Simulation’s engineers is therefore to deliver the most accurate feedback to the driver, with components as close as possible to those used in the racing world, or even actual racing parts.

“What we’re trying to do is close the gap between virtual and reality,” adds Mareschal. “The public can try our cutting-edge SectorOne tubular frame (like a real roll cage), the finest Dbox Haptic motion platform with a professional hydraulic pedal box system, one of the best steering wheel’s available, and a carbon fiber racing seat in a single-seater position.” 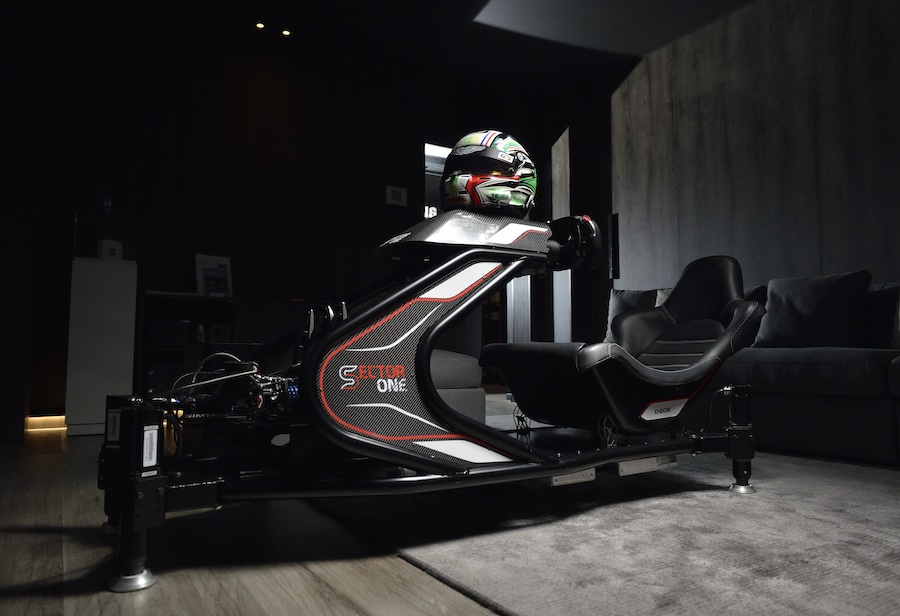 And this is where the partnership with Bond comes in, creating something unique and special within the Principality of Monaco. “One thing that is very important on a simulator is graphics. You need to be as immersed as possible,” says Mareschal. “So, this immersion is critical and here the idea is ultra-innovative. It’s like a laboratory with Samsung’s technology, with The Wall. You don’t usually find simulators with this size screen.”

There is a reason for that: the logistical challenge of bringing together the two elements cannot be underestimated. Trent Sprules, managing director of iCrew Services, is used to installing simulators at events such as the British Grand Prix in Silverstone, but setting it up in a small lounge in Monaco provided a unique set of challenges. “Getting the simulator in here, up the narrow stairs, is quite a challenge,” he explains.

Key to this project is the idea of creating an “experience”. It is one thing to have the tools, but maximising their potential is the important part. Faimatea has already formulated plans to attract clients not just from Monaco, but beyond.

“It’s something that wasn’t previously available in Monaco,” began Faimatea. “So, it’s about increasing exposure in Monaco, and also bringing in outside companies for corporate events; to experience Monaco with staff and management teams, try the simulator and have some competitive fun; see who gets the best time in the company, for example.”

The competitive element is a key ingredient to the project, and could manifest itself in a type of “Monaco Cup” where clients compete to record the best times. “The idea is to have the best drivers and personalities in Monaco come here, to enjoy it and think for example: Pierre Gasly or Mika Häkkinen has set such a flying lap time. I have the opportunity now to challenge them,” says Mareschal. 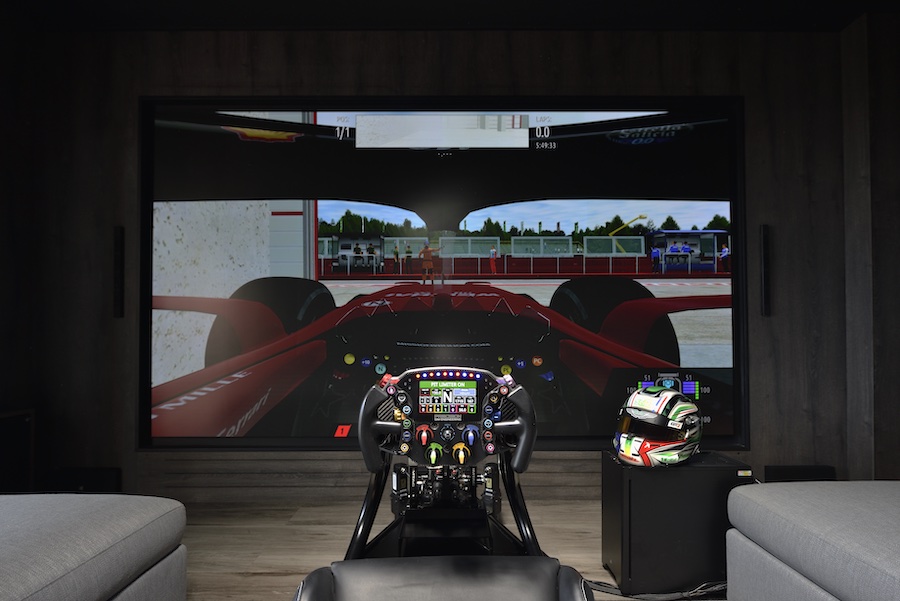 More broadly speaking, the addition of the simulator to the Samsung Lounge is about creating a more interactive event. Clients have long since been used to visiting the lounge to watch sporting events, for example the F1 races, but that is about to change, starting with this weekend’s Spanish GP.

“The simulator brings so much added value to the event. When you watch an F1 race, you stay passive, but here the VIP can become active. They are part of it. It’s interactive,” says Mareschal.

“The idea is that you come in before the official race, do a couple of time trials on the track, and then watch the race live on The Wall with the memory of having just driven it,” adds Faimatea.

And that is the key to this synergy event, this perfect marriage of Monegasque businesses. By coming together, pooling their respective expertise, they are creating a new experience in the Principality, one that is unique and interactive and, with the introduction of the “Monaco Cup”, potentially highly competitive.