Princess Charlene joined with other eminent proponents of children’s rights at a major summit in Delhi at the weekend.

Indian President Pranab Mukherjee, the Dalai Lama, and former President of East Timor, Jose Ramos-Horta, joined in calling for the globalisation of children’s rights on Saturday.

“The world is facing many problems. We humans have created these problems, and it is only we who can solve them. We can’t blame Buddha, or God or Jesus for the problems faced by our children,” the Dalai Lama told delegates at the two-day event.

“This can only come from compassion, from ending all the violence which we have seen in the 20th century. The 21st century has to be the century of peace.”

In 2015, an estimated 5.9 million children died before reaching the age of five, mostly as a result of preventable and treatable diseases, according to UNICEF. Almost half of the world’s extremely poor are children.

Indian child rights activist and Nobel Peace Prize winner, Kailash Satyarthi, organised the summit to bring together 250 leaders and laureates from politics, the corporate world, civil society, academia and the judiciary, and to harness their voices to advocate for children on one single platform.

He said that while progress has been made over the last ten years in decreasing the number of child labourers and increasing school attendance, it was not enough as millions of children are still exploited.

While on an official engagement in India to join other leaders at a top-level summit organised to promote children’s rights, HSH Princess Charlene visited a number of families affected by HIV in the southern Indian state of Tamil Nadu.

On a visit to the home of a 41-year-old farm worker, who suffers from chronic disease, she witnessed firsthand the terrible poverty that afflicts families where the main breadwinner cannot work. The Princess offered to help, and gave a gift of a cricket bat to the family’s only son.

A cheerful welcome awaited the Princess at a private college where children and adults afflicted by HIV had gathered to meet her. Princess Charlene was feted with rose bouquets, garlands and a crown of flowers. (Feature image: Facebook Palais Princier / Eric Mathon) 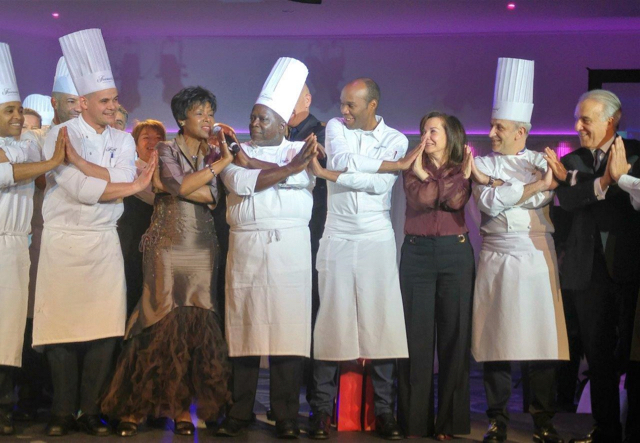 Award-winning chefs and members of the AIHM at the gala evening. ©DR[/caption] At the invitation of Xavier Rugeroni, General Manager of the Fairmont Monte Carlo, the annual Association of the Hotel Industry of Monaco (AIHM) held its annual Gala on Friday, January 13. The theme of the dinner was "All around chocolate.” As usual, the greatest chefs of the Principality distinguished themselves at this annual gathering. Marcel Ravin, the Michelin-starred chef at Monte-Carlo Bay Hotel & Resort who was recently honoured with the rank of Knight of the Legion of Honour, and Philippe Johannes, displayed great inventiveness by revisiting foie gras and “wolf’s back” with a touch of cocoa, giving a new balance to these traditional French dishes. The masterpiece, however, was the creation of the evening’s guest, the famous Martinique chef Jean-Charles Brédas, whose complexity of flavours of cucumber beans and cocoa beans greatly impressed the audience, all part of the Monegasque hotel industry. In the presence of HE Mr Henri Fissore, three prizes were awarded at the end of the evening, the prize of honour to Mr Stéphane Valéri, Minister of Health and Social Affairs, the Award of Merit to Mrs Bruna Maule Cassio of Les Anges Gardiens Association of Monaco, and the Excellence Award to Mr Guillaume Rose, Director of Tourism and Congresses. At the conclusion of the evening, AIHM Vice-President, Francis Poidevin, emphasised that "excellence rewards a long professional career of heart and mind”. The AIHM represents the hotel industry in the organisations and socio-economic bodies of the Principality, and has defended the interests of the profession and its members for the past 72 years. READ MORE: DTC celebrates 2016 successes READ MORE: Chefs take Taste Week to class

Business & Finance Stephanie Horsman - November 15, 2021
Monaco’s presence in Spain this month is undeniable, with two events focusing on issues close to the heart of the Principality: tourism and the environment.