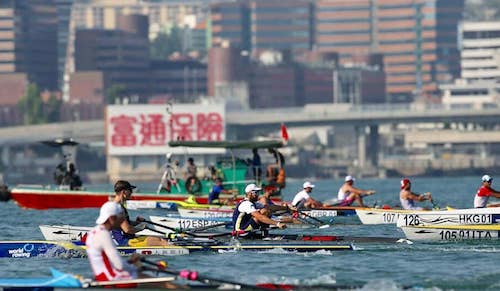 Despite a day of ups and downs, the Monaco Nautical Society’s Rowing Team has been able to secure a bronze in the men’s doubles race at the World Rowing Coastal Championships in Hong Kong.

Mathieu Monfort and Giuseppe Alberti snagged the only medal of the tournament in a day of disappointments and penalties that saw the Monegasques scratching their heads.

The bronze medal win was marred however as the Spanish team, who had been penalised giving Monfort and Alberti the silver, argued against the penalty. To the astonishment of all, the judges capitulated leaving the Monegasques firmly in third place.

In other races, one of Monaco’s four-man strike teams had a good start in the finals, especially as the Spanish favourites jumped the starting line too early, giving them a two minute penalty. They were doing well until the Russian team slammed into the side of their boat, throwing them completely off and leaving them a discouraging 8th place finish. Even this was thrown into chaos as the offending Russians claimed that they were the ones who had been rammed, and again, the judges sided with them, so the Monaco team slid to 13th place.

More collisions in the women’s doubles and the four-man pair added to the frustrations of the Monegasque delegation, until finally the day of misery was finally over. Despite all the setbacks, the Rowing Team is looking forward to next year, where they can prove themselves at the championships in Portugal.