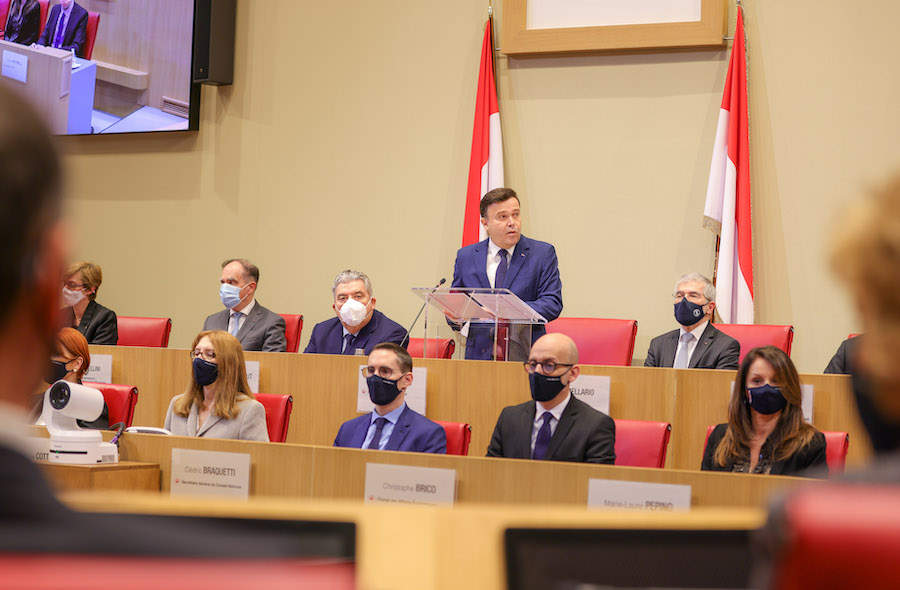 The National Council has called for the scrapping of Monaco’s harshest Covid rules, arguing that the government is less reactive in lifting restrictions than it is in implementing them.

The National Council released a press statement on Wednesday 9th February saying that elected officials had written to the Government requesting an immediate meeting of the Covid-19 Joint Monitoring Committee so both groups could discuss “a series of measures aimed at easing the health protocols and adapt the management of the health crisis in view of its current favourable evolution”.

In their letter addressed to Minister of State Pierre Dartout, National Council President Stéphane Valeri and President of the Special Commission for Analysis of the Covid-19 Crisis Jacques Rit note the decreasing incidence rate in Monaco, studies that show the Omicron variant is less dangerous than its Delta predecessor, and the fact that for several weeks the number of people admitted to intensive care has remained limited.

Elected officials are therefore asking to address a number of issues with the Prince’s Government.

“These last two categories should not, in fact, be assimilated in the statistics of patients hospitalised for Covid,” argues the National Council.

Elected officials have also questioned why Monaco has not taken receivership of the Novavax vaccine, despite it being authorised by the European Medical Agency at the end of December 2021, and the French Health Authority in mid-January 2022. “The traditional technological method used for this vaccine could be likely to convince people who until now remain wary of vaccines based on the messenger RNA technology,” they say in their letter to the State, calling for the Novavax vaccine to be made available at the National Vaccination Centre and offered to the resident population.

The letter also calls for the government to drop a number of restrictions including compulsory teleworking, mandatory masks outdoors with the exception of popular hotspots, and restrictions on sports and cultural events involving more than 2,000 people.

In line with France, officials would like Monaco to scrap self-isolation for contact cases who are fully vaccinated and test negative.

“The Monegasque rules are now much more restrictive in terms of isolation for people in contact cases benefiting from a complete vaccination scheme, than those in force in France, in particular. Besides the constraints that weigh on families, these rules are particularly penalising for the activity of companies and administrations, which are faced with many contact cases of this nature.”

The Assembly reiterated its call for air purifiers to be installed in school classrooms, saying “the efficiency of which has been demonstrated for many months in neighbouring municipalities”. They would also like to see isolation times around positive and contact cases in schools examined, as well as the need to wear masks outdoors, in playgrounds, during indoor school sports and when students are seated in class.

“Generally speaking, it seemed to elected officials that the Government was very

The National Council ended their letter by requesting a convening of the Covid-19 Monitoring Committee in the next few days.

The National Council has called for the scrapping of Monaco’s harshest restrictions, arguing that the government is less reactive in lifting restrictions than it is in implementing them.