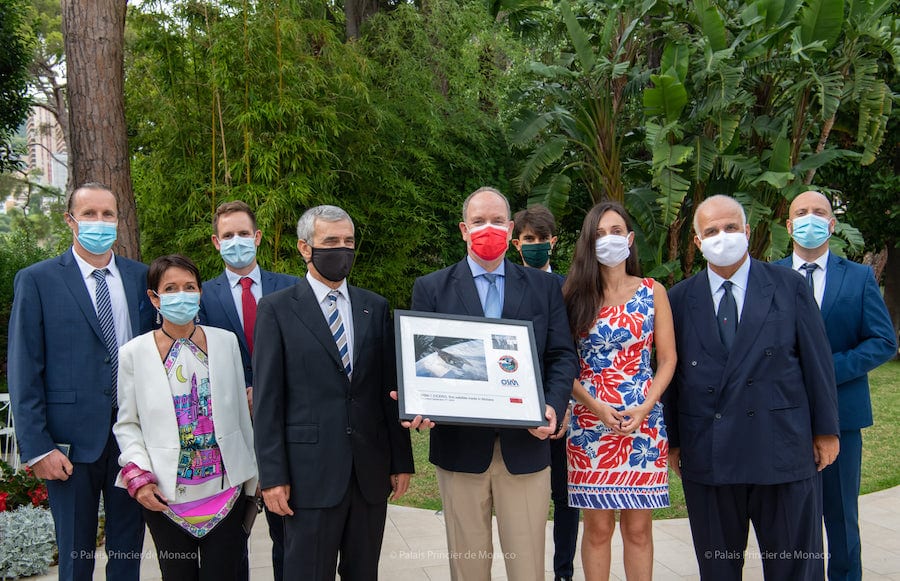 It’s been a big month for Orbital Solutions Monaco. Just weeks after successfully launching their nano-satellite into space, Prince Albert II invited the team to join him at the Palace.
Monaco start-up Orbital Solutions Monaco (OSM), attended a meet-up with Prince Albert II at the Palace last week where managers and employees presented the Sovereign with a commemorative photo of the Principality’s first nano-satellite.
OSM, headed up by Francesco Bongiovanni out of offices in Fontvieille, only has a handful of workers but the highly skilled team has managed to build a reliable nano-satellite that is currently flying over the Earth at an altitude of 530 kilometres.
“The miniaturisation of high technologies offers small states and private companies the possibility to become full-fledged actors in the space field once reserved only for big nations,” noted the Palace in a statement.
A chance to enter this new chapter of the “Space Race” is appealing for Monaco as it is for other smaller nations such as Luxembourg, Singapore and New Zealand, who are building rockets, intelligence and research-gathering satellites or projects for future mining and explorations of the moon, asteroids and even Mars.
The satellite weighs in at a tiny 10 kilos and can do an entire revolution of the planet in just 90 minutes and a speed of 28,000 km/h. Despite zipping by, it collects and transmits climactic and atmospheric data in what is considered by scientists to be a “low orbit”.
After several delays due to a variety of circumstances such as the health crisis and bad weather, the satellite was finally launched earlier this month from a launch site in Guyana.
The company is not resting on their laurels, though. They are already working on other satellite projects and intend to build one with the assistance of local secondary school students.