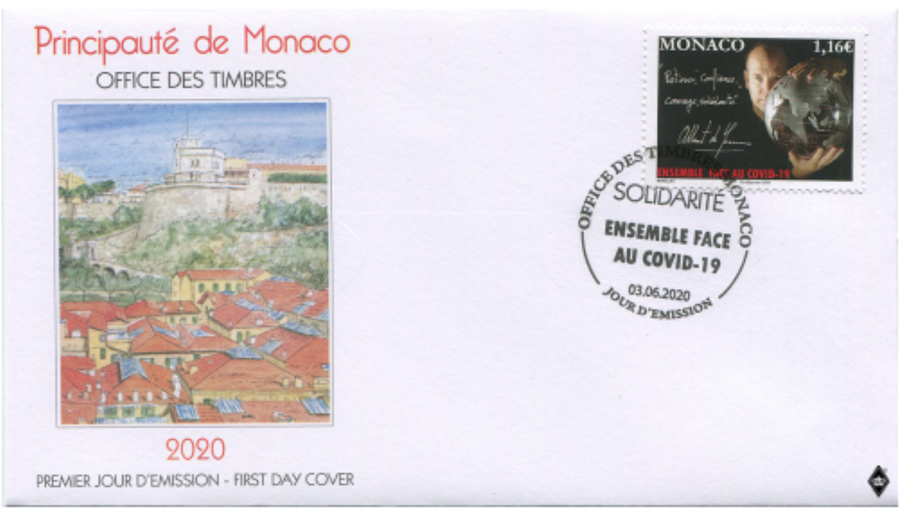 The Monaco Stamp Office has released several new designs this summer guaranteed to interest avid collectors and amuse the public-at-large.

The office puts out new stamps several times a year featuring new designs that are tributes to anniversaries, public figures, or important events in or related to the Principality.

This year, the stamp featuring Prince Albert II also gives a nod to the Covid-19 crisis. The epidemic gave rise to the message emblazoned on the stamp that reads, “Patience, trust, courage and solidarity” with a photo of the Sovereign Prince holding a clear globe. The stamp reminds people of the necessity to be unified in these difficult times, but also that the Prince has a global perspective on the local situation.

There is also a stamp commemorating the 50th anniversary of the Fort Antoine Theatre, using a distinct art deco-feel design. The outdoor amphitheatre has been around since 1970, but became a focal point for cultural events this summer when social distancing rules made indoor occupations impossible, leaving the door open for people to rediscover this special spot during their half century celebration year.

Also in the collection is a stamp showing the painting ‘Indolence’ by impressionist artist Eva Gonzales, whose grandfather was from Monaco.

The environment takes its place on a stamp as well. 2020 is the year of coral at the Oceanographic Museum and to highlight the museum’s latest exhibit, ‘Immersion’, featuring the Great Barrier Reef in Australia, the Stamp Office has put out a selection of three models to show their commitment to the protection of the reef.

Finally, in honour of the first International Cat Show of Monaco on 26th and 27th September organised by the local organisation De Gati de Munegu, there is a stamp featuring a beauty of a Siberian cat called Jolly d’Artannes.

The next set of original designs will come out in September and are reported to be featuring the new Casino Square and the Italian village of Terlizzi which once was a Grimaldi holding.