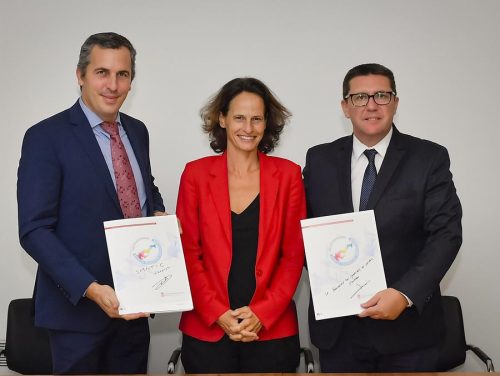 Two of Monaco’s major unions have signed the National Pact for Energy Transition, signalling a willingness on their part to make the necessary changes and to lead the way for other unions to follow suit.

President of the Monaco Employees Federation of Trade Unions (F2SM) Cedrick Lanari and Thierry Loutre, the Secretary General and Founder of the Monaco Union of New Information Technologies and Communication (SMNTIC), met last Friday with Annabelle Jaeger-Seydoux, Director of the Mission for Energy Transition (MTE) to officially sign the government’s energy transition plan.

The ceremony took place at the F2SM offices with the relevant union secretaries and members of the Bureau in attendance.

F2SM boasts a membership of nearly 800 employees in the Principality and Mr Lanari said that he was ready to “show the way” by leading the movement and putting in place universal systems that incorporate all 10 of the unions under the Federation’s umbrella.

Mobility and dematerialisation are the primary concerns for SMNTIC, and to this end they have already ceased handing out flyers, thus lessening waste, and are preparing to create a website hosted by fellow signatory Monaco Telecom in the coming year.

The National Pact for Energy Transition was implemented with the highly ambitious goal of reducing greenhouse gas emissions in Monaco based on targets set by HSH Prince Albert II last year. The pact was designed to be a tool for progress, allowing all Monegasque businesses and residents the opportunity to do their part in realising the objectives. The charter is open to all interested companies and individuals and can be sign online at www.energy-transition.gouv.mc