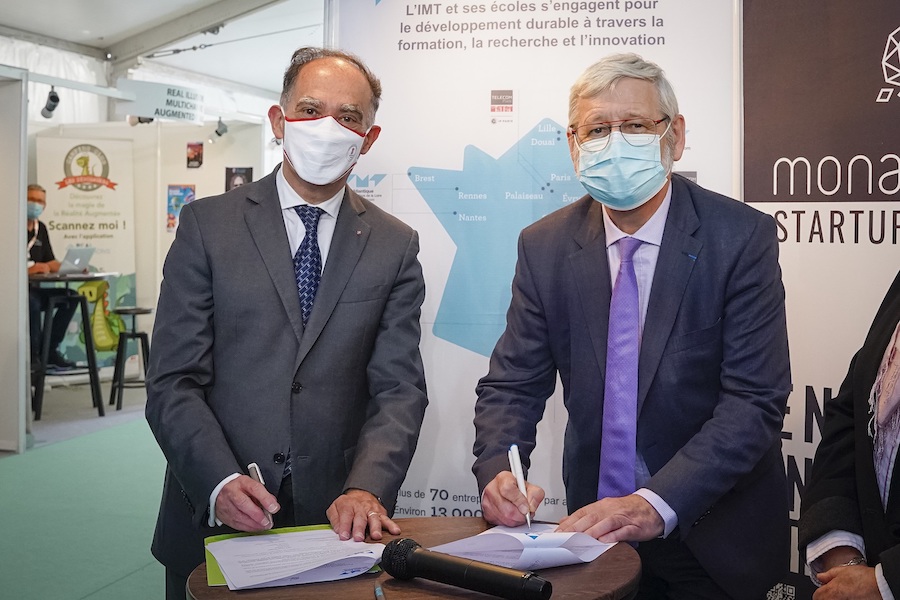 MonacoTech and French incubator IMT Nord Europe have officially signed a pact to work together toward the common goal of helping select emerging companies rise to the top of their games.

MonacoTech, the start-up incubator founded in 2017 by the government, Monaco Telecom and Xavier Niel, has signed a formal collaboration agreement with French incubator APUI- IMT Nord Europe, part of the University of Lille and Institut Mines-Télécom, to expand their reach.

At the recent Ever Monaco Forum, Jean Castellini, President of MonacoTech and Minister of Finance and Economy, alongside Alain Schmitt, Director of IMT Nord Europe, confirmed the collaboration agreement signed in 2021 between MonacoTech and the APUI-IMT Nord Europe incubator.

“I am very happy today to confirm, after a year of partnership, the collaboration agreement initiated last year between APUI-IMT Nord Europe and MonacoTech, in order to support and develop innovation in areas in which our two organizations are particularly involved: the environment, energy and digital technology,” Mr Castellini said of the affiliation. “Innovation is virtuous in that it benefits the economy, the general interest and our territories. This is the meaning of this partnership.”

The two institutions share a number of values, in that both are striving to work with companies who are developing innovative business models, particularly in the Green Tech and Clean Tech, sustainable cities and smart building sectors.

Since their combined efforts first began a year ago, the two entities wanted to publicly reaffirm their joint commitment to start-up creation and expansion in both territories, giving the new businesses a chance to benefit from the expertise and knowledge offered by both MonacoTech and APUI-IMT Nord Europe, as well as give representatives from these new companies the opportunity to meet other like-minded businesspeople and form potential synergistic alliances.

“This partnership represents added value for both structures in their mission to support entrepreneurship and economic development,” said Alain Schmitt. “Through this collaboration, we want to give our startups the opportunity to open up to new horizons and to exchange with the economic and institutional players in the Principality of Monaco’s ecosystem.”

The Start-Up Village at the EVER Monaco event gave a glimpse at what the future of this partnership will look like, with four start-ups from MonacoTech and three from APUI-IMT Nord Europe on hand.