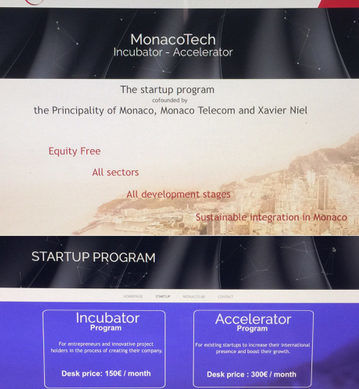 MonacoTech launched its website Monday at midnight from which applicants can submit their business projects for either the Incubator or Accelerator program. The site –  www.monacotech.mc – in both English and French, is the entry platform for startups seeking support.

Headed by Fabrice Marquet, MonacoTech has been created by the Monaco government, in partnership with Monaco Telecom and French entrepreneur Xavier Niel. It has multiple objectives: to support innovative projects in business creation in Monaco; to create successful companies; to diversify the Principality’s economic activities by positioning itself as a credible and radiant innovation capital and to generate indirect economic spin-offs. In the long term, the role of MonacoTech is to perpetuate new companies and integrate them into the local economic fabric.

Local and international projects in any field related to technology, in fintech, healthtech, smart city, connected objects, and so on, will be studied by a jury of professionals. As previously announced, MonacoTech will have space totalling 820m2, which can accommodate up to 20 startups, that is to say about sixty seats, with a semi-public part and co-working space, from a cost of €150 to €300 per month. Startups will benefit from support in terms of advice, follow-up, support and financing during the initial stages of their creation. The premises are scheduled to open in the autumn of 2017.

Speaking at the CleanEquity conference in March, Minster of Economy Jean Castellini said, “Together, we will try to make Monaco a base of start-ups in the telecom industry but I would want the cleantech nuggets of tomorrow to be born, raised and incubated in the Principality, as well as healthtech and fintech.”

Business & Finance Cassandra Tanti - October 1, 2019
In the first week of October, Final September Purchasing Managers Indices (PMIs) will be released across all main regions (US, China, Eurozone and UK). Despite some recent goodwill gestures from both US and Chinese authorities, manufacturing will likely continue to suffer from a slowdown in global trade. As such, we expect the indicator to remain in contraction territory in most regions although momentum should stabilise. Services activity, on the other hand, is likely to continue to expand, albeit at a more moderate pace. Amongst all this uncertainty, the household sector has proven very resilient so far and investors will continue to pay close attention to developments in the Eurozone and US labour markets. Unemployment rates for August (EU) and September (US) are likely to remain at multi-decade lows but with the US Federal Reserve (Fed) having tied its monetary policy to incoming data, September’s US non-farm payrolls will likely be the most important catalyst of the week. Recent data would suggest that job creation may have slowed down but we still expect healthy earnings growth. The week starting on Monday 7th October should be quieter on the data front with investor focus likely to move to US-China trade talks which are currently scheduled to resume on 10thOctober. Nevertheless, September’s Consumer Price Index (CPI) will likely draw some attention after the US Fed’s decision to cut interest rates last month. After a soft reading in August, the recent spike in oil prices may lead inflation to rebound temporarily although it should remain below the Fed’s 2% target. While China didn’t follow the US in cutting interest rates, September’s money supply growth may give the market some indication as to whether the country’s central bank will need to go further than the cut in banks’ reserve ratios announced last month. Finally, with the 31st October deadline fast approaching, uncertainty around Brexit is as high as ever. With only a few days left before the critical EU Leaders Summit (October 17-18), news flow is likely to accelerate. In regards to data, August GDP and industrial production are likely to confirm that growth in the UK remains sluggish. Written by: Barclays Private Bank

Business & Finance Cassandra Tanti - March 29, 2021
MonacoTech has put out a call for the next round of applicants, but only projects with high potential and social impact will make the cut.