“Une rencontre” by Jean and Danièle Lorenzi-Scotto opens today at the Salle d’Expostion in the port. Organized by the Directorate of Cultural Affairs and designed by Lidia Carrion, the exhibition will allow the public to discover more than two hundred works of Jean and Danièle Lorenzi-Scotto, two figures who made a mark in Monaco’s cultural life during the second-half of the twentieth century.

Their story is a powerful one of love.

Jean-Eugène Lorenzi, born in 1916, was a lawyer in the Principality for over forty years; he was also elected to the National Council and a member the Crown Council. His passion for drawing led him to work with several mediums, such as pencil or charcoal, but it was undoubtedly ink that remained his favourite, as it allowed him to best express his imagination. Towards the end of his life, the artist experimented with etching on substrates as diverse as copper, zinc, and mostly linoleum plexiglass.

But he was much more than a man who drew. He wrote a cookbook “Cuisine Monegasque” for which Princess Grace congratulated him personally by letter in 1970 on his initiative to respect Monegasque traditions; he designed stamps that were used in circulation by La Poste Monaco; and he wrote lyrics for Ischa, an opera performed at the Palais des Festival in Cannes. He died tragically in 1989. 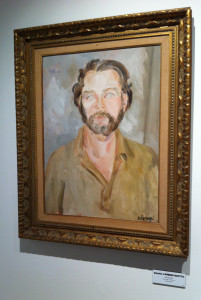 “My favourite work is the portrait I painted of my husband,” Mme Lorenzi-Scotto told Monaco Life at the preview. “A portrait always takes a person’s soul.”

Mme Lorenzi-Scotto, a graduate of the Academy of Fine Arts in Florence, spent a few years in Paris before returning to Monaco to teach at the Municipal School of Decorative Arts, where she worked for over twenty years and often painted portraits of her students, some of which are included in “Une rencontre”.

It was in Monaco she met her husband, Jean, twenty years her senior. “We always made time for art,” Mme Lorenzi-Scotto said.

This showing is the first time that the work of these two artists has been open to the public. A celebration of love and art, it offers a glimpse of the Monaco of yesteryear. Mme Lorenzi-Scotto decided to show her paintings and her husband’s drawings as to not confuse visitors.

Her earlier paintings were described as the “explosive form of Fauvism” but then, after the death of her husband, she moved to clean lines and light effects.

“I’ve always been faithful to my style,” the 81-year-old said to Monaco Life. Looking together at her only self-portrait on display, she added, “When I was 17, I wanted to be an actress but my mother would not allow it, so I became an artist.”

About ten years ago, Mme Lorenzi-Scotto fulfilled her adolescent dream and joined a theatre group, and is still acting today. She “often performs Pagnol” on stage.

Mme Lorenzi-Scotto is remarkable. And so are her paintings.

Jérémy Moutout. Photo: Facebook YCM[/caption] The Monaco Yacht Club (YCM) has reported that junior sailor Jérémy Moutout has become YCM Sports Section’s season champion. The title comes after Jérémy pulled off “an excellent” 3rd place in the seventh and final stage of the Mediterranean Championship 2017 in Cannes. “Three races in a steady breeze gave Jérémy ample opportunity to experiment with tactics,” the club said. “The Monegasque has shown impressive consistency to finish on the podium six times during the year, including two victories to keep him in front of 50 competitors,” said YCM.

Local News Stephanie Horsman - December 28, 2020
AS Monaco Basketball has finished their Jeep Elite year with a 77-71 win against Boulazac Perigord at an away game played at Le Palio.