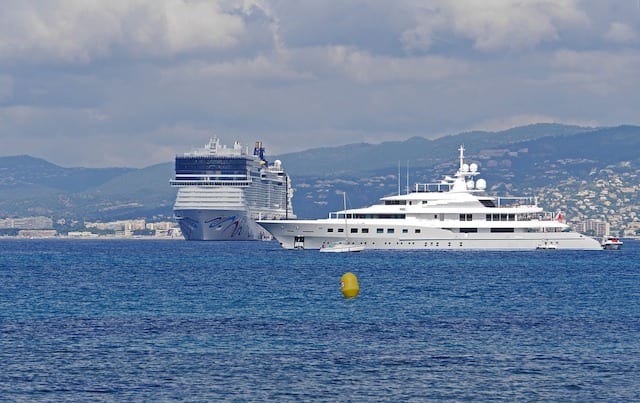 Yachts flying the Monegasque flag have been given official authorisation by maritime decree to travel or stopover in French territorial waters.

France and Monaco have had longstanding reciprocal agreements on many things, due largely in part to the fact that France surrounds Monaco on three sides, making these agreements beneficial to all concerned.

The one side of Monaco not enrobed by France borders the sea. So, it seems only logical that the Principality and France would have cause to give each other certain access to the territorial waters of the other.

By a maritime decree dated 18th May, the French have granted rights to Monegasque vessels in their waters, and conversely, boats bearing the flag of France have the right to navigate and stopover in Monaco.

Stopovers at the port and at anchor are limited along the coastline to a maximum distance of 54 nautical miles, about 100km, from the ports of Monaco for French craft.

For the moment, pleasure craft looking to moor are still subjected to the current rules regarding lockdown and deconfinement in each individual municipality. Sailors must therefore appeal to the town hall before assuming they will be welcome in port. Additionally, a call by VHF or phone must be made by any vessel entering French waters.

News Cassandra Tanti - November 13, 2019
Malizia II, helmed by Boris Herrmann and Will Harris, has crossed the finish in 12th place for the 14th edition of Transat Jacques Vabre. The pair on the Monegasque boat, initiated by YCM Vice President Pierre Casiraghi, took 14 days, 22 hours, 28 minutes and 43 seconds to cover 4,350 theoretical miles from Le Havre to Salvador de Bahia, Brazil, at an average speed of 12.13 knots. In reality, they covered 4,979 at 13.89 knots and were 1 day 10 hours 20 minutes 43 seconds behind the winner in this class, Apivia, co-skippered by Yann Eliès and Charlie Dalin. “I’d like to sincerely thank Pierre Casiraghi for his support from the start of this project, the Yacht Club of Monaco and the young people in the Sports Section who followed and encouraged us throughout the race, all the team who helped prepare the boat and my teammate Will who was competing in his first Transat Jacques Vabre.” The German sailor chose the 25-year-old Englishman Will Harris who had excelled on the Figaro circuit. After joining forces for the Rolex Fastnet Race this summer, the pair decided to tackle this highly-competitive transatlantic which had 29 IMOCAs registered. After a good start and fast race out of the Channel they were lying second off Perros-Guirec. [embed]https://www.facebook.com/yachtclubmonaco/videos/2179105919058096/[/embed] Rapidly out-paced by the new foilers, they made the choice with the Prysmian Group to continue west, on a less tight option than Hugo Boss, being positioned further south. Boris and Will re-joined Yannick Bestaven and Roland Jourdain (Maître CoQ) and Louis Burton and Davy Beaudart (Bureau Vallée 2). As they headed south with the other west-option mavericks, they were neck and neck with Hugo Boss until Alex Thomson was forced to stop after hitting a submerged unidentified object north-west of the Canaries. In the wake of Maître CoQ, Malizia II-Yacht Club de Monaco were locked in a battle with Corum and Groupe Apicil which lasted all along the Brazilian coast. It was a fiercely fought 12th place that has proved an ideal dress rehearsal before Boris Herrmann lines up on 8th November for the start of the 2020 Vendée Globe. “Obviously, I’m a bit disappointed as the result does not really reflect our ambition or potential,” said Boris Herrmann on his arrival in Brazil. “Nevertheless, we have no regrets. With the information we received at the time of making that strategic decision, going west seemed the right one.” “We absolutely must have a debriefing with our meteorologists and make an analysis to continue to improve, although undeniably there is always a lot of luck involved. Analysing, taking and accepting risks is all part of the game.”   Photo: Yacht Club of Monaco

Gilles Tonelli, Minister of Foreign Affairs and Cooperation and Thomas Greminger, Secretary General of the OSCE. Photo: DC[/caption] Gilles Tonelli, Minister for Foreign Affairs and Cooperation, spoke on a number of topics important to the Principality at the 24th Ministerial Council of the Organisation for Security and Co-operation in Europe, held in Vienna on December 7 and 8. The minister reaffirmed Monaco's commitment to the fundamental rules of international law, first and foremost the defence of human rights, the rule of law and democracy, as well as the respect for the principles of justice and peace. Gilles Tonelli praised the OSCE's many actions in the context of the Ukrainian crisis, as well as the important efforts made to calm tensions in the region. He also reaffirmed the financial support of the Principality to the OSCE Special Observer Mission to Ukraine. In addition, Mr Tonelli indicated that the Principality will continue its efforts to contribute, as far as it can, to the fight against “the terrorist scourge”. These efforts are reflected in the extension, for three years, of the programme that Monaco is supporting alongside UNODC, aimed at helping the Sahel countries to improve their criminal justice systems in the fight against terrorism and violent extremism, and by supporting the "Octopus-Cybercrim Program" under the auspices of the Council of Europe. Finally, Gilles Tonelli said that the Principality of Monaco remains resolutely engaged with its Mediterranean partners, notably through the extension, in 2018-2019, of a financing agreement between the Prince's Government and the OSCE on a project to ”fight against trafficking in human beings along migration routes". This extension was signed, in the margins of the Ministerial Council, in a bilateral meeting with Ambassador Thomas Greminger, the new Secretary General of the OSCE, in the presence of Madina Jarbussynova, Special Representative and OSCE Coordinator for the fight against trafficking in human beings. The minister was accompanied in Vienna by Ms Isabelle Berro-Amadei, Ambassador, Permanent Representative of the Principality of Monaco to the OSCE, and Lorenzo Ravano, First Counsellor to the Monaco Embassy in Berlin.