Organised by Monegasque Road Safety, the Monegasque Final of the Road Education Exercise took place on Monday, June 25, at the Recreation Centre of the Route de la Turbie, involving 36 children from classes CM1 and CM2 schools in the Principality.

Participants in the final passed a written test and then rode their bicycles on a short route lined with road signs that they may meet in real road conditions. Each of them was followed by a policeman who noted any infringements.

The trophies awarded to the laureates were offered by the Monaco Automobile Club, the National Education, Youth and Sports Department and the Monegasque Road Safety Department. The best school cup went to St. Charles School.

The first three winners then represented Monaco at the Departmental Finals held in Saint-Laurent du Var on June 27, the best of them ranking 21st out of 50.

PHOTO: Filip Vucak (Croatia); Anne-Marie Boisbouvier, Counsellor in the Prince's Cabinet; Buddhi K. Athauda, (Sri Lanka); Modupe E. Irele (Nigeria); Marie-Catherine Caruso-Ravera, Director of Diplomatic and Consular Relations and Thiep Nguyen (Vietnam). Photo: Manuel Vitali/DC[/caption] On Tuesday, May 29, Marie-Catherine Caruso-Ravera, Monaco’s Director of Diplomatic and Consular Relations, received, at a luncheon at the Hermitage Hotel, HE Modupe E. Irele, Ambassador Extraordinary and Plenipotentiary of Nigeria; HE Filip Vucak, Ambassador Extraordinary and Plenipotentiary of the Republic of Croatia; HE Thiep Nguyen, Ambassador Extraordinary and Plenipotentiary of the Socialist Republic of Vietnam and HE Buddhi K. Athauda, Ambassador Extraordinary and Plenipotentiary of Sri Lanka, who in the morning had presented their credentials to the Sovereign Prince. After obtaining a degree in education, Ms Modupe E. Irele joined State College Pennsylvania in 2001 where she held positions of Programme Director and Special Assistant to the Executive Director of the World Campus. Founder and Lead Consultant in Key Learning Solutions, she directs the programmes for the professional development qualifications of the Cambridge International Examinations under the British Council. She is also the author of many books on education. HE Filip Vucak joined the Ministry of Foreign Affairs in 1992. He was appointed Minister-Counsellor in 1995, then Minister Plenipotentiary at the Croatian Embassy in Paris. He held the post of Ambassador of Croatia to Spain, to the Holy See and the Order of Malta. Director of Cabinet and Senior Advisor to the Deputy Prime Minister in 2016, he was promoted Special Advisor to the Deputy Prime Minister and Minister of Foreign and European Affairs in 2017. HE Thiep Nguyen rose through the ranks of the Ministry of Foreign Affairs where he became Deputy Director. In 2002, he was appointed Counsellor at the Permanent Mission of Vietnam to the United Nations in Geneva. In 2007, he returned to the MAE as Deputy Director in the Department of Europe II. Ambassador of Vietnam to Austria in 2011, the President of the Republic gave him the title of Ambassador of the Socialist Republic of Vietnam. From 2014, he held the position of Director of Information Security at the Ministry of Foreign Affairs. Specialising in Business Administration, HE Buddhi K. Athauda has held the position of President and CEO of import-export and e-commerce companies in the United States. Vice-President at Aelix Inc, he was responsible for business development in Asia and the Middle East and then joined the US company Iridium as Regional Manager for Asia. Appointed Ambassador of Sri Lanka to the Netherlands in 2011, he helped promote bilateral relations in the field of finance and trade between the two countries. 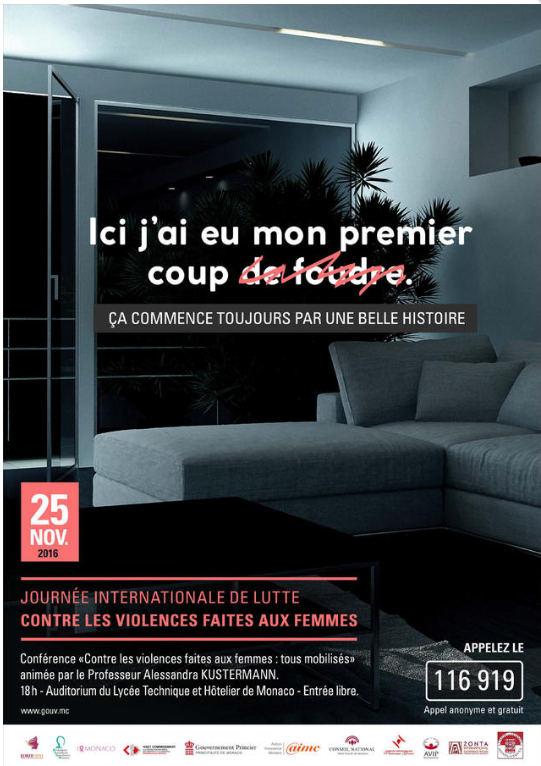 Copyright: Direction de la Communication Monaco[/caption] On November 25, the Principality of Monaco will be associated in a very hands-on way with the International Day for the Elimination of Violence against Women. This initiative, supported by the United Nations, will also be an opportunity to present the main initiatives and various mechanisms put in place by the State and the various associations in the Principality to combat this violence. In addition, on November 25, 2016, a single, anonymous and free telephone number will be launched for victims of domestic violence: 116 919. An information page dedicated to victims of violence will be set up on the website of the Prince's Government. In order to raise public awareness, a conference on the theme "Against violence against women: all mobilised", will take place on Friday, November 25, at 18:00, at the Auditorium of the Technical and Hotel School of Monaco, 7 Allée Lazare Sauvaigo. It will be led by Professor Alessandra Kustermann, a specialist in obstetrics and gynecology, an expert in the care of victims of violence. Open attendance. READ MORE: Monaco is first state to meet with GREVIO READ ALSO: GenderHopes exhibit promotes confident, strong girls