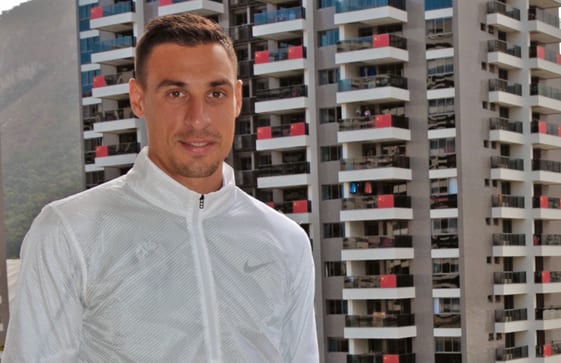 Brice Etes took to the track Friday in the Men’s 800m. Along with Kevin Crovetto (Artistic Gymnastics) and Yann Siccardi (Judo), 32-year-old Etes arrived in Rio, Brazil on Saturday July 30 as part of the Monegasque delegate competing in the Games of the XXXI Olympiad.

“Everything is going very well here in the Olympic Village. It was a little hard at first, with some minor problems with hot water, but everything was quickly repaired and soon forgotten,” Etes, 32, told the Monegasque Olympic Committee.

Commenting on the kindness of the volunteers, Etes added “The Olympic Village is nice, with its green areas and soothing views. Personally, with my injured Achilles tendon, I’ve been doing quite a bit of physio.”

The time difference poses no problem for Etes as he had already left for the US prior to arriving in Brazil. “I feel like I’m at an internship: I train, I eat and I sleep, there’s nothing else to do.”

Etes holds the national 800m record in Monaco with at time of 1:47,61, when he competed at the 2010 IAAF Diamond League at Stade Louis II, a stadium Monaco resident and Olympian Paula Radcliffe describes as “very special“. The World and Olympic Record for the event was set by Kenyan David Lekuta Rudisha 1:40.91 at the London 2012 Olympics.

Sports Staff Writer - August 16, 2018
AS Monaco’s Under 19 soccer team passed over the doomed Morandi bridge in Genoa just 90 minutes before the tragedy that cost 39 lives.

Photo: Twitter Sébastien Ogier[/caption] Local resident Sébastien Ogier will try for a sixth straight world title in the Monte Carlo Rally, which starts from Place du Casino on Thursday, January 25. "Only a sixth world title will satisfy me, anything less will be a failure," Ogier told AFP. "It's going to be a fight, tougher than ever, but that is what we want," the 34-year-old said. The Monte-Carlo Rally is especially significant as it’s the season opener and one of just four on tarmac. French ace Ogier of Ford won last year’s the title despite only winning twice, including the Monte-Carlo, while Belgium's Thierry Neuville secured four wins last year behind the wheel of his Hyundai. In addition to Ford, Toyota, Citroen, and Hyundai are all fielding top drivers for the new 13-rally season that sees a number of changes. Seven legs of the championship are contested on dirt tracks including the summer heat of Turkey, back on the schedule at Poland's expense. Ogier is counting on his Ford Fiesta to once again come up trumps. "The truth is it's the same car as last year," Ogier said. "There are evolutions here and there, but no revolutions," he said. "But Ford will make it perform better."