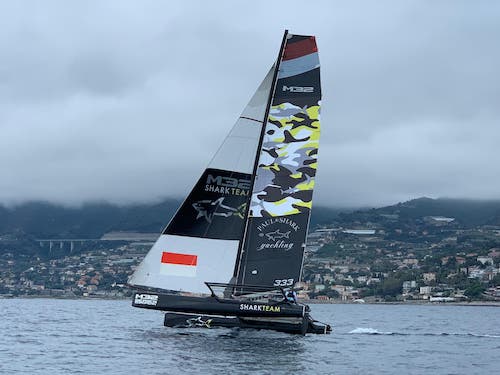 Taking part for the first time, the Monaco Yacht Club’s flagship Tuiga, skippered by Daniel Perreira with Beppe Zaoli at the helm and a crew of YCM members, won in the IRC category of the Grimaldi Trophy, while victory in the ORC went to Italian Paolo-Bruno Bonomo’s boat, Aurora.

Some 40 boats competed in the season-closer inshore race between San Remo and Monaco, organised by the San Remo Yacht Club and the Yacht Club of Monaco.

YCM member Guido Miani completed the course in the fastest time, crossing the finish in Monaco to set a new record of 1 hour 20 minutes on his M32 (9.68m) monohull catamaran. The race committee was forced to cancel the return contest on Sunday due to particularly difficult conditions.

There’s no let up for racers as the clock ticks down to the start of the 2019-2020 Monaco Sportsboat Winter Series, which kicks off next weekend.

Launched by the Monaco Yacht Club in 2013, the Monaco Sportsboat Winter Series offers monthly one-design regattas attracting teams from all over Europe to train in the Bay of Monaco, the highlight being the 36th Primo Cup – Trophée Credit Suisse (6-9 February 2020).

Alongside Melges 20s is the championship’s flagship J/70 class with some 40 boats expected for Act 1 from 7th to 10th November. The Principality boasts one of the largest fleets in the Mediterranean with 20 boats grouped in the J/70 Monaco Class Association.

As Monaco is set to host the J/70 World Championship in October 2021, the Monaco Sportsboat Winter Series will be an ideal training base.