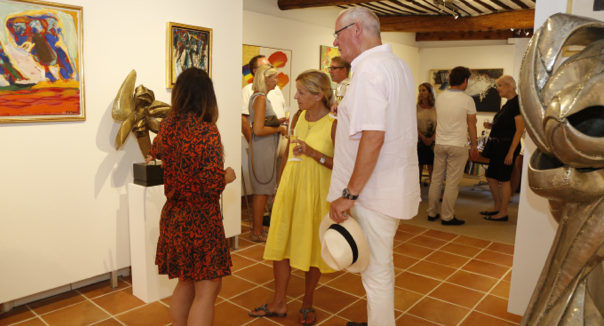 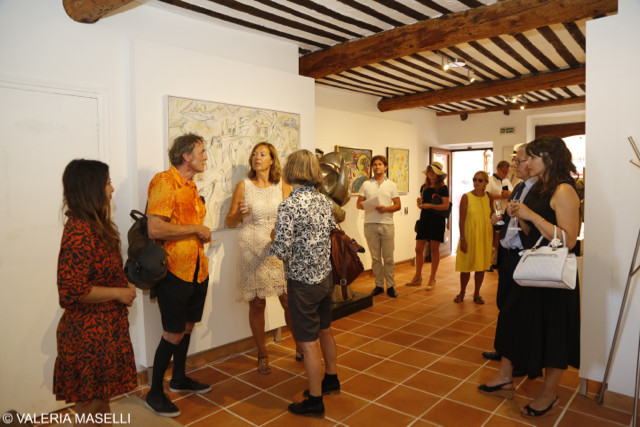 Monaco’s newest art gallery, La Galerie Birch Monaco, opened Tuesday night to rave reviews from visitors who embarked on an “artistic adventure” in its charming premises on the Rock.

Dynamic Danish duo Anette Birch and her daughter Caroline, 20, welcomed more than 70 people to the opening of their new gallery – almost 70 years to the day that their father and grandfather, Borge Birch, founded Galerie Birch in Copenhagen.

Ms Birch said: “It is wonderful to finally be able to share my father’s legacy with the people of Monaco, my adoptive home. I have spent a lot of time planning the new gallery here on the Rock, I walked the streets of the Principality looking for the ideal location, and I believe I found it here on the Rock. Today feels like my dreams have come true.

“I was delighted by the response, it was the perfect way to launch my new project and I am very grateful to everyone who came to find out more about our ‘artistic adventure’.”

At the forefront of last night’s opening exhibition were paintings by world famous artist Asger Jorn, co-founder of the CoBrA art movement in Paris in 1948. Birch was one of the first art dealers to discover the Danish artist and remained friends with him until his death in 1973.

Other artists from this avant-garde movement were also represented including Egill Jacobsen, Pierre Alechinsky and Carl-Henning Pedersen, as well as important pieces from artists who were friends with Jorn, and subsequently Birch, such as Walasse Ting, Jan Voss and Pinot Gallizio. 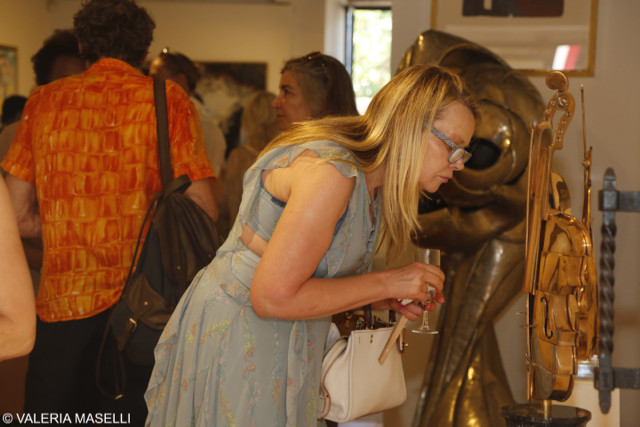 Tuesday’s vernissage was the first of many that Anette and Caroline, a third generation art connoisseur who also runs her own Birch Copenhagen-Contemporary Art Gallery in Denmark, plan to host in Monaco over the summer.

From July 4, the charismatic team will be welcoming visitors to their “Tuesday on The Rock” events, from 4-7pm, where art lovers or merely the curious are invited to come and discover works by some of Europe’s most prolific contemporary artists over a glass of Ms Birch’s favourite cocktail. Tuesday on The Rock will run every week from until September 26.

Jan E. Frydman, Head of Delegation of the Swedish Bar Association to the Council of European Bars and Law Societies[/caption] The Swedish Bar Association’s annual conference will hold its Gala at the Monaco Yacht Club on Saturday, March 25. The dinner will be held in the presence of HE Veronika Wand-Danielsson, Ambassador of Sweden to France and Monaco, Patricia Husson, Consul General of Sweden to Monaco, Alexis Marquet, Batonnier de Monaco, and Jan E. Frydman, Head of Delegation of the Swedish Bar Association to the Council of European Bars and Law Societies. The evening will conclude a two-day international congress in Nice and Monaco. Mr Frydman, who is also Special Adviser to the European Commissioner for Trade, has been in charge of organising of the prestigious event. “Every year, and for the past 20 some years now, the International Chapter holds an annual meeting somewhere in the world, as it is supposed to cover all Members practicing outside of Sweden,” Mr Frydman told Monaco Life. “And in connection with that, the Chapter also organises the annual ‘International Days’, available to all Members of the Swedish Bar. We have been in London, Paris, Istanbul, Barcelona, Lisbon and elsewhere.” Wanting to offer participants an opportunity to learn more about his favourite location, Mr Frydman chose Monaco, which he finds a fascinating country “that has so much more to offer than low taxes and glamour”. Of course, he added, “Monaco is an unusually well functioning society with a genuine life behind the beautiful facade that is interesting to explore and is less known. And Monaco can offer the highest quality in terms of accessibility, service, safety, gastronomy and cultural events, and has some of the world's most outstanding venues.” The Côte d’Azur is one of the most popular regions for Swedes living abroad and the Swedish club, Rivieraklubben, counts 2,000 members, unusually high for a local association. “The latest figures I have is that some 30,000 Swedes live permanently in France, of which, in the PACA region, 10,000 reside full-time with 10,000 owning a second home. I also understand there are some 300 Swedes living in Monaco,” the lawyer commented. This week’s conference in Nice and Monaco will be attended by more 100 Swedish lawyers practicing in Sweden and around the world, and it will include International Days, covering two days of seminars and speeches to update participants on the activities of the Bar, and on current legal issues of particular relevance. The Swedish Bar Association – Le Barreau de Suède – is divided into several regional chapters, and each Member of the Bar also belongs to such a local chapter, depending on where in Sweden she or he practices law. The close to 100 Members who practice Swedish law outside of Sweden belong to the International Chapter. “This year we will cover the legal systems in France and Monaco, how to do business in France and Monaco, and how to buy real estate in the region,” Mr Frydman, who’s been a Member of the Bar since 2001, said. “We will also discuss current legal issues such as the impact of Brexit on the legal profession, issues related to the Swedish constitution and the rule of law. The seminars satisfy part of the annual continuing education requirement for Members.” Founded in 1887, the Swedish Bar Association has approximately 5,700 Members and organises all formally practicing lawyers in Sweden; only Members of the Bar may use the professional title “advokat”. “I have served as a Director of the International Chapter, and as a Member of the Board of Governors. I am currently the Bar’s Head of Delegation to the Council of European Bars and Law Societies, Mr Frydman detailed. “In that capacity, I represent the Bar in front of all European Bar Associations on topics involving the international and cross-border practice of law, and broader issues such as democracy, rule of law and human rights.” Unrelated to the Bar, Mr Frydman has an official function serving as the Conseiller to the European Commissioner for Trade – or the European Trade Minister – work in Brussels. The Swedish Bar Association’s annual conference runs from March 24-25, 2017 in Nice and Monaco.

Drunk driver gambles with his life

A young SBM employee had a lucky escape when the Audi he was driving hit a pillar in the Millennium Tunnel 4:30 am on the morning of December 26, local French-language daily Monaco-Matin reports. The impact was so severe that the emergency services thought they’d have to remove his remains with a small spoon, Monaco’s Criminal Court heard. The young man avoided jail, and was sentenced to four months suspended and ordered to pay three fines of €45 each for driving while over the drink-driving limit.