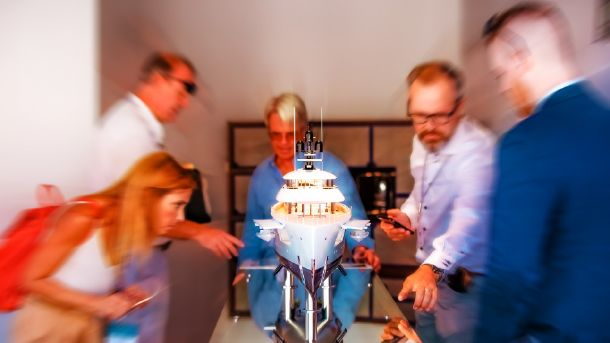 This September at the 2021 Monaco Yacht Show, visitors will discover a brand-new exhibition area dedicated to design and innovative solutions in superyachting: the Yacht Design and Innovation Hub.

Future charterers and yacht owners will meet a selection of designers who will present their works and their creative talents in designing a superyacht from a blank sheet.

​​​​​​​Located on virage Louis Chiron in Port Hercule, inside the new show’s Dockside area (superyacht and tender exhibition), the Yacht Design and Innovation Hub will complete the show’s historical Designer Gallery on Quai des Etats-Unis where visitors are used to directly meeting up with the designers and naval architects on their booths.
With the Yacht Design and Innovation Hub, the MYS organisers aim to enhance the first-time superyacht experience of the new generation of customers who plan to build their future yacht.

Visitors to the show will then meet up with top-notch yacht designers to start discussing their next yacht project or receive the experts’ insights on the current and future trends in superyachting.

During the show’s four days, designers will hold 15-minute talks about design in yachting and also about their experience or projects. Access will be free to all visitors depending on room capacity and sanitary measures, no registration required.

The Yacht Design and Innovation Hub is part of the new programme developed by the MYS Organisers to offer a bespoke experience of unparalleled prestige to future superyacht charterers and owners in visit to the Monaco Yacht Show.

Local News Staff Writer - July 25, 2018
Magic of Persia’s ‘A Tale of Two Cities’ returns to Monaco next week with an art exhibition and auction, presenting works by Iranian artists. 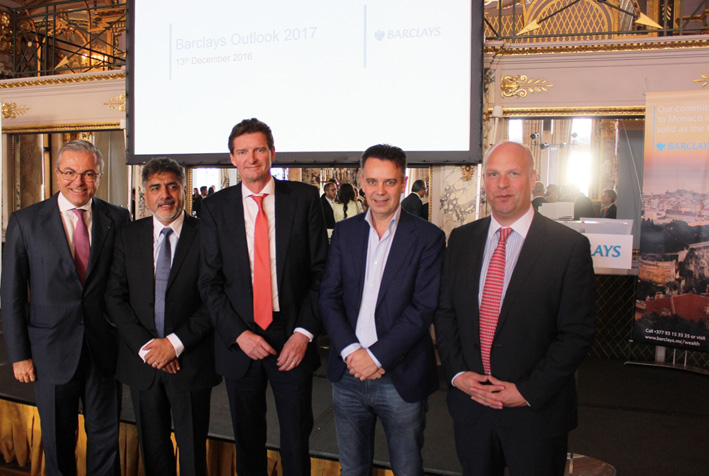 From left to right: Francesco Grosoli, CEO, Wealth and Investment Management EMEA & Monaco Branch, Barclays; James Caan CBE, Philanthropist, Investor & Entrepreneur; Urs Wietlisbach, Co-Founder and Partner of Partners Group; Frans van Eersel, CEO & Founder of Dopay and Henk Potts, Chief EMEA Economist, Barclays.[/caption] Barclays hosted its annual client lunch on Tuesday 13, December 2016 and welcomed 150 guests at the Salle Empire at the Belle Époque Hotel de Paris. With the theme “Monte-Carlo Outlook 2017 Direct Investments: Finding Value during Uncertain Times”, Henk Potts, Director of Global Research & Investments at Barclays, moderated the two and a half hour event that focused on Private Equity and Entrepreneurship, and their importance both for the Principality and world economies during a time of political uncertainty. Francesco Grosoli, CEO, Barclays Wealth and Investment Management EMEA & Monaco Branch, delivered the official welcome to the investment conference and told audiences that while we may be living in uncertain times the reality is that global economy and financial markets are incredibly resilient. Mr Grosoli added: “Barclays Monaco opened in 1923, there’s been the Second World War, an industrial revolution, and financial crisis but we have been here for our clients, shown resilience and are as solid as the Rock.” Fabio Fois, Senior European Economist, Barclays Investment Bank, provided a Global Economic Outlook, predicting global growth at 3.6 or 3.7 percent next year. Regarding the UK, which had a 2% growth rate in 2016, Barclays envisions only a +0.7 percent for 2017, and says the weak pound will generate inflation although he added, “The pound is still a safe currency compared to the euro.” Jean Castellini, Monaco Minister of Finance and Economy, spoke on the subject of “The Principality of Monaco for Start-Ups and Private Equity”. Looking at the topics of credibility and consistency, which are the most important for investors in the field of private equity he referred to Monaco’s virtuous circle and unique economy, which has no debt and no deficit. As a result, he believes there is trust to invest in the country and confidence in the long-term vision of the Prince. The Minister added that Monaco doesn’t need to compete with financial centres in Europe or elsewhere but rather for people to embrace the experts that “sit here, live here, deal here”, who may consider using investment structures they are familiar with in other jurisdictions. He concluded that the creation of value, creation of jobs and creation of the Principality’s new image and position in the world will have more to do in the future with the incubation and acceleration of start-ups.  He cited Monaco Venture Capital Association as an example, but emphasised: “We’ve decided to set up our own incubator and accelerator, a facility that will open in 2017 in Fontvieille, and will team up Monaco Telecom with the current owner Xavier Niel, who will help us select successful start-ups, whether they already exist in the Principality, or are identified using the incubation process he’s already started up in Paris. We hope that this will be a starting point of a new venture for the Principality.” The “Story of a Philanthropist, Investor & Entrepreneur” presentation was given by Dragon’s Den James Caan (CBE). Mr Caan’s message was clear: invest in something you know, and understand what that business does, and what you can bring to the table, other than capital. He reminded the audience that businesses by themselves do not create wealth; people create wealth and drive businesses. Deddy Gan, Head of the Barclays Accelerator Program, went on to talk about the Accelerator program which is currently live in four cities -Tel Aviv, London, New York and Cape Town. The Monte Carlo Outlook 2017 conference closed with a reminder from the Barclays team that private equity should be considered part of a balanced investment portfolio and wishing everyone a happy and prosperous 2017. READ MORE: Barclays Monaco: an active commitment to children