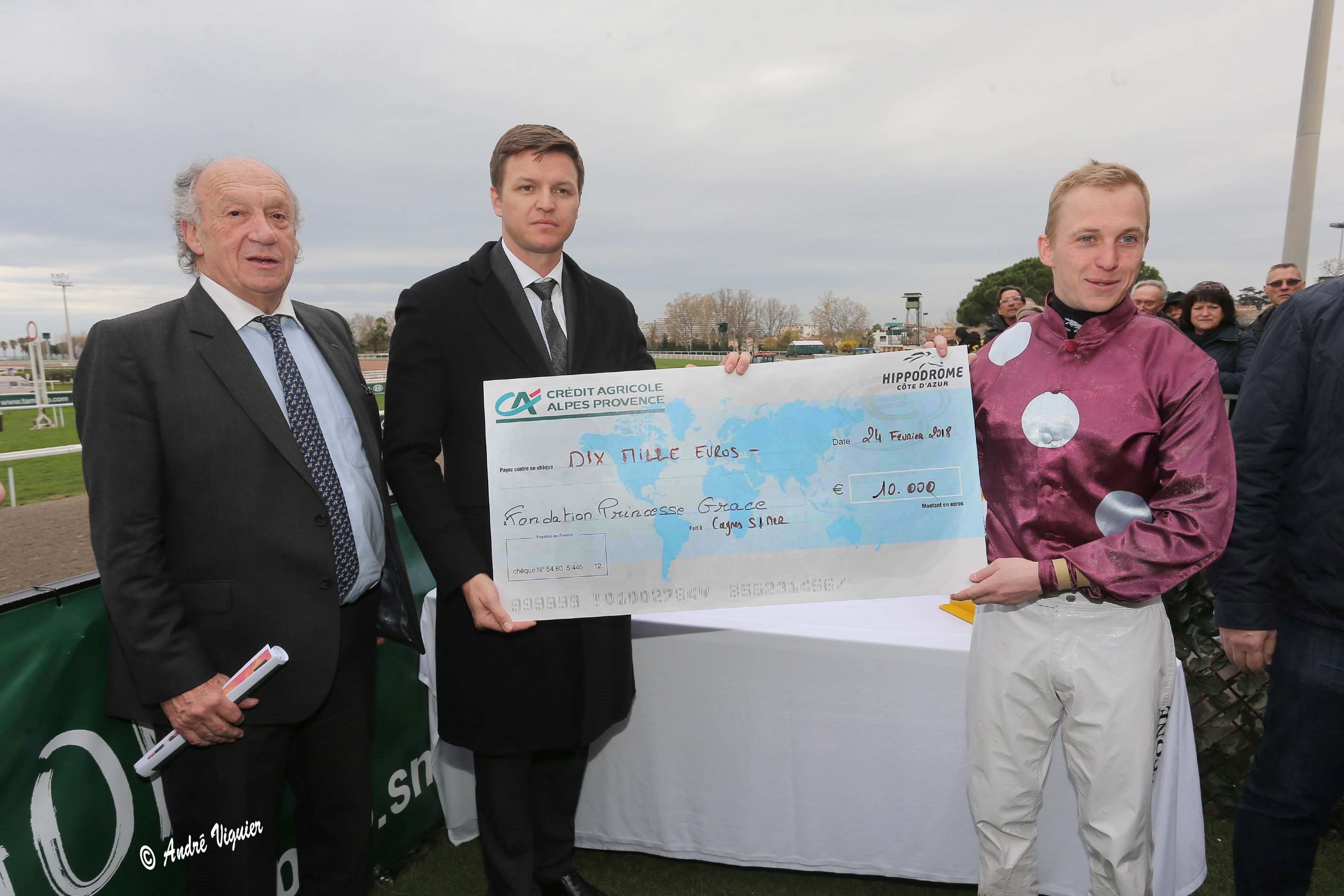 The Princess Charlene Charity Mile was won by Namajsar, a four-year old female, at Cagnes-sur-Mer racetrack on Saturday, February 24, with her trainer, Elie Lellouche, watching.

Princess Charlene could not attend the second annual race bearing her name, as she was in South Korea for the Olympic Winter Games, where Aksel Lund Svindal, Princess Charlene of Monaco Foundation Ambassador, won Gold in the Men’s Downhill.

The Princess was represented at the hippodrome by her brother, Gareth Wittstock, who presented the “Prix Princesse Charlène de Monaco-Charity Mile Cup”, along with Francois Forcioli-Conti, President of the Racing Society of the Côte d’Azur, in the presence of 200 personalities, directors of corporate donors, partners, and representatives of associations.

The race, run over 1,600 metres, was for the benefit of 16 charities, with each winning between €6,000 and €2,300 depending on the placement of each horse with which the associations were linked. The draw to match the horses and the associations was held on Thursday at the Monaco Yacht Club in the presence of Mr Wittstock, and Mr Forcioli-Conti.

“I am pleased that the 2018 edition of this Charity Race, as well as the prize that bears my name, will help to protect children, people in difficulty and contribute to the welfare of animals,” the Princess said before the race.

Princess Charlene added, “My thanks go to all those who supported this wonderful initiative and I would also like to congratulate the associations present for their continued efforts.”

Many companies and donors supported this second edition of the Charity Mile and the €50,000 in prize money was divided between charitable Foundations, which included the Princess Charlene Foundation of Monaco, Prince Albert II of Monaco Foundation, Princess-Grace-of-Monaco Foundation, Fight Aids Monaco and M Foundation, and associations related to the horse world – Association of Jockeys of Galop, Beyond tracks, CDEAM-handi Mobile Equitation, Just World International – as well as local organisations: Lenval Foundation for Children, Monaco Red Cross, AMAPEI, Guardian Angels of Monaco, French Red Cross, CASREC, and League Against Cardiomyopathy.

As the stars start to arrive in Cannes, where as many as 200,000 visitors are expected, local authorities have given strong assurances regarding public safety for those attending the 70th annual Film Festival. The Maritime Prefecture of the Mediterranean said that from May 17 until May 28, the closing date of the festival, to ensure the safety of those present in the "Fanzone" in Cannes, a special maritime security system has been established, based around two restricted zones, one with a speed limit of five knots and a second inner zone with a speed limit of three knots. The strategy is to deal with any attempt by terrorists to reach the Festival from the sea. In its communiqué, the Maritime Prefecture added: "The Maritime Gendarmerie will coordinate the resources of the State's naval divisions in the area – Navy, Maritime Police, Departmental Gendarmerie, Customs, Maritime Affairs and National Police. The mission is to ensure the control of the maritime area of the Bay of Cannes and, in particular the immediate approaches of the festival palace, the port and the beach, to inform, detect, question, control and neutralise if necessary all suspicious movements.” In addition, "Other marine facilities are also placed on alert and capable of reinforcing the system on the orders of the Maritime Prefect." The maritime precautions are being put in place to complement heightened security on land.