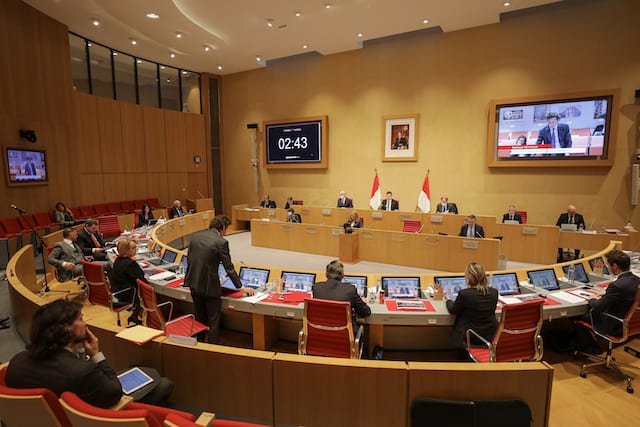 With the worst of the health crisis in the rear view mirror, the National Council and the government are looking to jumpstart the economy through continued financial aid and cautious continued reopenings.

A few months ago, as the powers that be in Monaco were knee deep in how to keep the population safe from the Covid epidemic, another urgent situation arose. The economic fallout and resulting concerns of a total lockdown were just dawning on everyone, so the National Council and the Prince’s government joined forces to create a Joint Monitoring Committee dedicated to sharing proposals for the best way forward in those difficult times.

A €350 million package was agreed upon to assist the economic actors and employees of the Principality when certain sectors of the economy were simply not allowed to function as usual. These funds came with strings attached and controls were put in place to sanction those who could unfairly benefit from the economic solidarity measures put in place by the state.

Today, what happens post-confinement on both a social and economic level are being examined and the Joint Committee is again looking for solutions to thorny problems.

For example, currently there is a 30th June cut-off for aid to those who were eligible during the crisis period. The Council has asked that there not be an abrupt stoppage, but rather a more degressive approach, so that those having a difficult time getting back on their feet can have access to help for as long as needed until things are once again “business as usual”.

The government had put forth a plan in a similar vein, but the Council says the plan is not as ambitious as it could have been, so it is asking for a few tweaks. The trick here is that the allotted sum voted on not be exceeded whilst still ensuring those who need aid are able to access it.

The National Council is also asking that certain deconfinement measures that are currently in place start to be eased in accordance with the plans of neighbouring countries. Relaxation measure to be considered include the reopening of sports halls, cinemas, parks, fitness centres and kindergartens, as well as a less strict dealing with restaurants, where advance reservations are required and distances between tables are greater than in France.

In a statement released by the Council, they state their purpose: “For elected officials, Monaco must be a model of economic recovery and constantly stay one step ahead. Rather than saving appropriations yet voted and therefore available to support economic actors in Monaco with a view to recovery, the National Council must work to develop new types of revenue for the State in different sectors of the economic activity.”