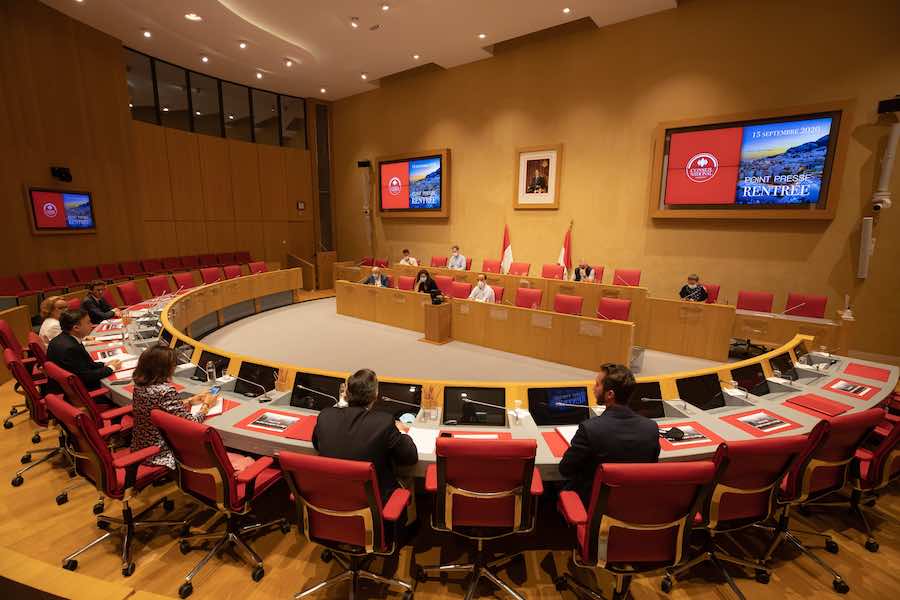 While welcoming the opening of a dedicated Covid testing centre at Espace Léo Ferré this week, the National Council says the government must do more and make saliva tests available now for everyone.
Back to school also means back to work for the National Council and President Stéphane Valeri led a press conference on Tuesday with fellow councillors to discuss the issues that are on the table, including a reduction in the budget deficit and continued support for the economic recovery plan.
But as has been the case for months, the health crisis dominates, with increased testing and the new screening centre at Espace Léo Ferré taking centre stage.
Mr Valeri said that he and the new Minister of State, Pierre Dartout, have been able to discuss this issue with success, however on the advice of Dr Christophe Robero, chairman of the Committee on Social Interests and Miscellaneous Affairs, he believes that Monaco needs a dedicated testing site open seven days a week to accommodate the citizens if and when they require testing, in order to lessen the impact the virus has on the Principality.


“Remember that we voted for €300 million in April so that the government has all the necessary means to protect our people and our economy against this crisis,” said Mr Valeri, adding, “The system put in place by the Minister of Health was difficult to read and insufficient for those who wanted or needed to be tested. The general feeling was that the route to be tested was like an obstacle course, with often more than eight days between the start of the process and obtaining a result, even for symptomatic people or cases of contact with a medical prescription.”
Mr Valeri acknowledged that a dedicated centre at Espace Léo Ferré is a good first step in guaranteeing sufficient testing capacity, though he said more must be done.
“A unique site is an important step, but it is not sufficient. We must also increase our capacity to test and to analyse in the Principality…  That’s why today we also ask the government to put in place saliva tests, which are now reliable, more comfortable and obtain much faster results than PCR tests.”
His statement comes as Professor Jean-Francois Delfraissy, of France’s Scientific Council, told a senate hearing on Tuesday that saliva tests for coronavirus should be rolled out across the country from the end of September. Results are available between 15 minutes and one hour after a sample is taken, he told the hearing.

Meanwhile, Marc Mourou, President of the Education, Youth and Sports Committee, called for more and faster processing of tests for teachers and classmates of students who have tested positive for Covid, while Béatrice Fresco-Rolfo was adamant about the need to respect social distancing measures.
Quality of life and the budget were also touched on. Brigitte Boccone-Pagès insisted that a balance must be struck to ensure people have a good quality of life and suggested that noise pollution measures be put in place and that new construction not be approved for areas that are already full.
It was also announced that the budget deficit should be reduced to between €100 to €150 million due to positive figures as a result of real estate VAT, mostly coming from the Mareterra project, as well as payment to the government of part of the anticipated balance.