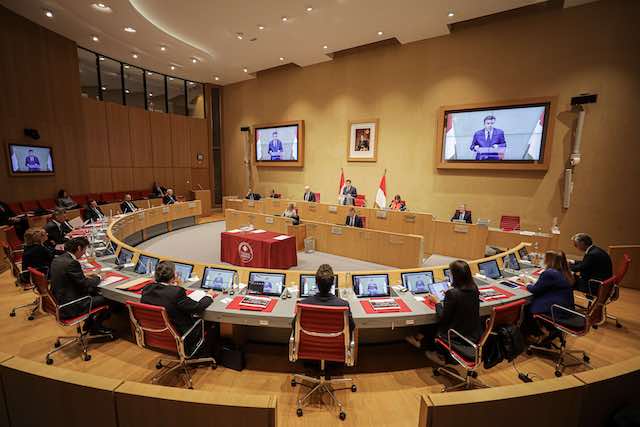 The Assembly has unanimously re-elected Stéphane Valeri as President of the National Council, with Brigitte Boccone-Pagès remaining as Vice-President.
In fact, the elections, held during Monday’s spring session, saw the reappointment of all the councillors who were present. Only Pierre Bardy, José Badia and Michèle Dittlot were absent from the proceedings.
“Before returning to the reasons for this new special session and the context in which we are holding it, I would like to express to you, my dear colleagues, to you all, to each and every one of you, my most sincere thanks for your unanimous vote, in the sense of national unity that we have implemented together,” said Mr Valeri after his re-election.
Balthazar Seydoux retained his seat for Finances and the National Economy, Christophe Robino the CISAD, Thomas Brezzo the Legislation and José Badia the External Relations. Special commissions with Marc Mourou for Education, Youth and Sports, Franck Lobono for Housing, Nathalie Amoratti-Blanc for Women and Family Rights, Daniel Boeri for Culture and Heritage, of which Michèle Dittlot remains vice-president, while Guillaume Rose keeps the Environment and Quality of life department. Finally, Fabrice Notari continued as chairman of the monitoring committee for negotiations with the European Union, Franck Julien of that of digital development and Jean-Louis Grinda (Monegasque Union) for monitoring the Constitutional Reserve Fund and the modernisation of public accounts.
Two additional commissions were created, that for the modification of the rules of procedure which aims to bring into conformity the recommendations of GRECO, of which Thomas Brezzo is president, and another on the analysis of the Covid-19 crisis with Jacques Rit as chairman.
The mood remained serious as the council president reminded everyone that harmony is the best way forward in these trying times.
“This National Council was natural, necessary and I would even say essential to face, united in the National Council, the serious crisis that we are going through,” said Mr Valeri. “Given the magnitude of this ordeal for our country, it was logical and decisive that the elected officials overcome political divisions, thinking only of the interests of the country.”
Mr Valeri also paid tribute to Max Brousse, former dean of the National Council, who passed away in December, recounting his career and telling stories of his own personal memories from his life.