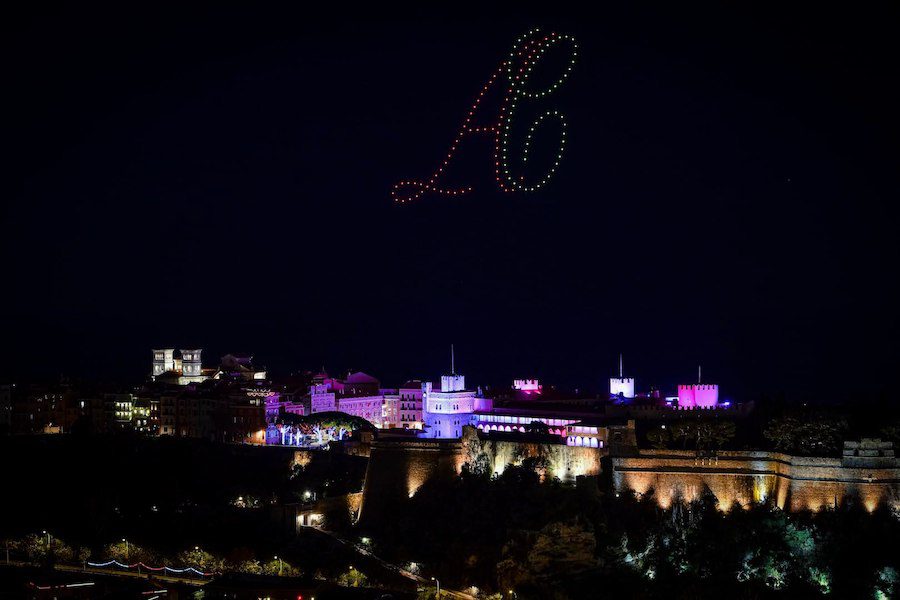 On the eve of National Day, Prince Albert handed out awards for exceptional service and merit, gave a speech filled with memoriams, and offered hope for the future. Later that evening, the nation was dazzled by a drone show that exceeded expectations and proved environmentally sound to boot.

National Day in Monaco is usually filled with a great mixture of pomp, emotion, and a bit of fun. This year is no different, despite the challenges of the pandemic and economic recovery, with Prince Albert honouring the newest recipients of the Order of Saint Charles and the Order of Grimaldi, as well as those who were awarded medals for Physical Education and Sport in the Principality.

During the first ceremony, the Prince presented the Medals for Orders of Saint Charles and Grimaldi in the main courtyard of the Palace where he declared, “It is for me, every year, a pleasure and a renewed privilege to speak before the recipients of the two prestigious national orders – the Order of Saint Charles and the Order of Grimaldi – in order to distinguish them.”

He also used the time to thank all those in public and health services for their support and hard work during the pandemic but urged continued caution going forward as the indicators show that the crisis is far from over.

“Thanks to the tireless work of my government, the commitment of its services and the health professions, the support of the National Council as well as the support of the population, the situation has clearly improved in terms of health.”

“The game is not yet won,” said the head of state. “Shrewd observers agree in saying so in view of the current figures which are going up a little. It is therefore important to remain both vigilant and active. We must therefore persist in implementing measures preventing contagion, such as barrier gestures or vaccination.”

In reference to the economy, the Prince went on to say, “Most of the work has also been done to preserve our economy, safeguard our businesses and the standard of living of their employees. I do not forget either, of course, the care given to our school and sports system as well as to the situation of our elders. It is particularly important to me today to salute this collective effort.”

No speech by the Monegasque head of state would be complete without mention of a topic close to his heart, the environment. On this he said, “Our world is in turmoil and the Covid-19 pandemic is only one of its plagues. COP26, which I recently attended in Glasgow, highlighted many more. I also hear the desperation of populations struck in their flesh by conflicts of all kinds. We cannot be insensitive to these misfortunes and, moreover, this is the meaning to be given to our policy of international cooperation. But it is just as much our duty, our responsibility, towards those who will come after us, to project Monaco forward.”

The next set of awards were for Education and Sports and were presented at Stade Louis II. The Prince spoke before the assembled group of athletes, coaches, and other figures in the sporting world.

Lightening the solemn mood later that evening, Monaco’s residents were treated to a spectacular drone show, in lieu of the usual fireworks display. The precision and coordination of the 196 drones was extraordinary as they flew over Port Hercule and the Rock, creating symbols and words specific to the Principality, such as “Viva Munegu (Long Live Monaco), the planet Earth, and the intertwined A and C representing the union of Albert and Charlene.

The show began at 8pm with the full moon as a backdrop, and the whole of Monaco’s eyes were turned to the sight. Ten scenes in total were created by local company MC-Clic in this 100% eco-friendly event. The show lasted 12 minutes and was a huge hit.

Events continue Friday with the National Day mass at the Cathedral and the presentation of rank insignia and medals in the Cour d’Honneur, followed by the taking of arms and the military parade on the Place du Palais Princier.