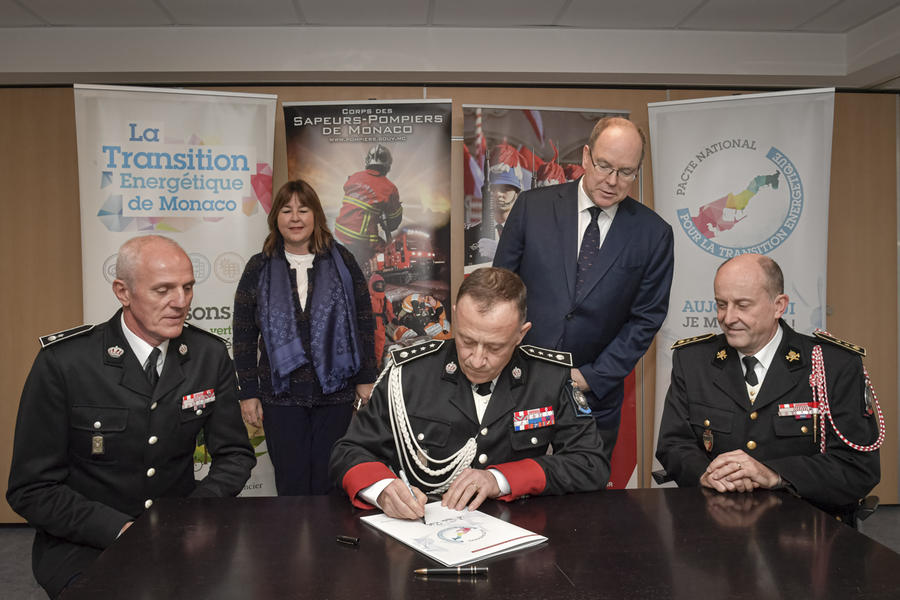 The Public Force has signed up to the National Pact, marking the 100th entity to commit to Monaco’s Energy Transition.
The force was represented by Colonel Tony Varo, who signed the pact on 22nd January in the presence of HSH Prince Albert, Minister of Equipment, Environment and Town Planning Marie-Pierre Gramaglia, Minister of the Interior Patrice Cellario, and Director of the Mission for the Energy Transition Annabelle Jaeger-Seydoux.
Surrounded by Lieutenant-Colonel Norbert Fassiaux, Head of the Fire Brigade, and Commander Gilles Convertini, Head of the Prince’s Carabinieri Corps, Colonel Tony Varo signed on behalf of the two Corps under his authority.
Echoing this membership, Anthony de Sevelinges, Head of the Public Building Maintenance Service (SMBP), also gave a presentation on the installation of photovoltaic panels recently installed on the roof of the Fontvieille Barracks, showing in real time the energy production of the solar panels, directly fed back into the electrical installations of the building.
The signing means that 271 soldiers will engage collectively and individually in the National Pact, and they will also go on to train the 170 families and 200 children involved in this dynamic. The extent of the Public Force’s commitment then becomes quite significant.
“The commitment of the Prince’s riflemen and firefighters is a strong signal, especially since I know that your motivation is high and that it started long before today,” said Marie-Pierre Gramaglia, referring to the various initiatives that are already in place within the Public Force. They include the use of ecological vehicles, recycling practices at the four barracks with regular awareness workshops, implementation of the WIT system (monitoring of energy consumption implemented by the SMBP), reusing materials and an interest in renewable energies.
By joining the National Pact, the Public Force also commits to reduce the number of plastic bottles used, soon installing water coolers in offices, as well as organising training for eco-driving.
Each body has appointed an “energy referent” who will be responsible for monitoring consumption on WIT, while several MTE awareness workshops are planned for February and will continue throughout the year.
The National Pact for the Energy Transition has now attracted almost 1,200 signatories and 100 member entities, which represents more than a quarter of Monaco’s employees.
Photo: © – Direction de la Communication – Stéphane Danna