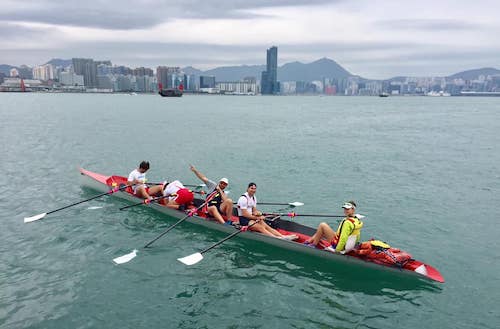 A Monaco delegation arrived in Hong Kong earlier in the week in preparation for the Rowing World Championships being held this weekend.

The 14 competitors arrived in the Chinese city three days before the start of the Championships in order to get some last minute training in and to get a feel for the city.

The trip, which took 17 hours and took the team through Dubai, saw them arriving in Hong Kong in good spirits and ready for the competition.

Their boats arrived by container and were quickly put to good use, as the athletes spent their first morning on the water feeling confident and ready despite the high humidity and heat.

Amongst the rowers there are seven veterans from last year’s World Championship held in Canada, where the team came home with two medals. Three of the team are debutantes, ready to fight for Monaco and their team.

The site of the contest, Causeway Bay, is off the north side of the city, offering fantastic views of both mainland Kowloon and Hong Kong Island.

“Everything went well even though it was very hot,” competitor Kristina Fortuna said in an interview with La Gazette de Monaco. “The plus in Hong Kong is the view of the buildings when you row. It has an effect.”