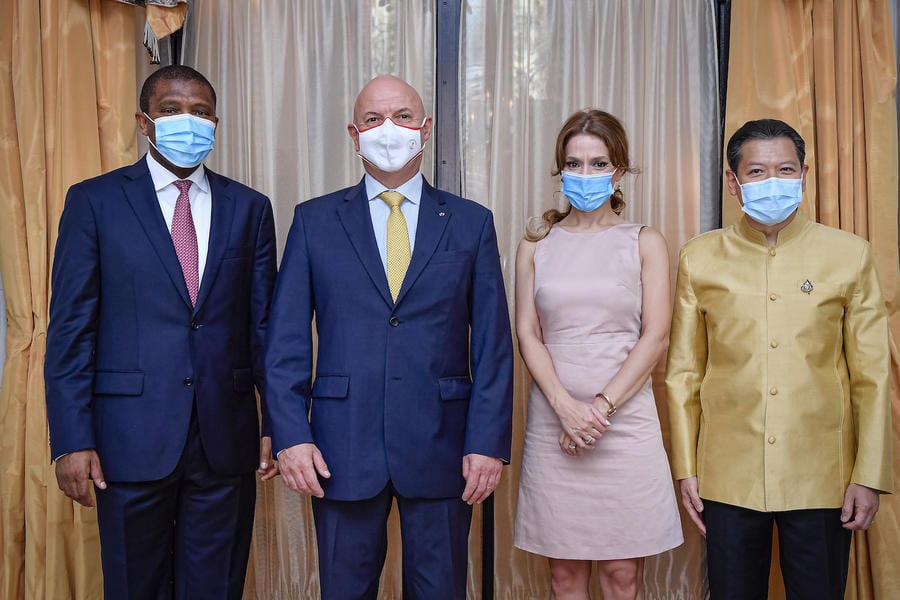 It’s been a month of diplomatic accreditations, with several ambassadors officially presenting their credentials in Monaco and internationally.
On Tuesday 22nd September, Minister of External Relations and Cooperation Laurent Anselmi received at the Hermitage Hotel Ambassador of the Republic of Georgia Tea Katukia, Ambassador of the Republic of South Africa Tebogo Seokolo, and Ambassador of the Kingdom of Thailand Sarun Charoensuwan.
The diplomats had presented their Letters of Credence to HSH Prince Albert earlier in the morning.
Tea Katukia has worked for almost 20 years in France and Italy on European and international issues in the fields of institutional communication, research and scientific journalism. In addition to her university studies, Ms Katukia has undertaken a professional career within the main French think tanks specialising in European issues. She was notably Secretary General at the Centre for Analysis and Forecasting of International Risks and Editor-in-Chief of Diplomatie magazine.
Tebogo Seokolo joined the Ministry of Foreign Affairs (MFA) in 1995 as Deputy Director, following the advent of democracy in South Africa. During his career he has held the positions of Director, Head of Western Europe at the MFA and Deputy Chief of State Protocol, among others. Promoted Ambassador, he served in Turkey, Azerbaijan and Uzbekistan, and at the United Nations.
Sarun Charoensuwan worked in various Departments before being appointed Director of the Division for Peace, Security and Disarmament in the Department of International Organisations. He continued his studies at the MFA until he served as Director-General of the Department of European Affairs, of the Department of East Asian Affairs and then of the Department of American and South Pacific Affairs. Appointed Ambassador in 2015, he was accredited to the Republic of Korea.


Meanwhile, on 16th September, Isabelle Berro-Amadeï presented His Majesty the King of the Netherlands Willem Alexander with her Letters of Credence accrediting her as Ambassador of Monaco.
The official ceremony took place at the Palais Nordeinde in The Hague and was followed by a private meeting, during which various subjects were discussed, in particular the consequences of the health crisis for the two countries, the common challenges imposed by the environmental issues as well as the measures implemented to ensure the digital transition of the Principality. The commitment of H.S.H Prince Albert II to protecting the oceans was underlined, an area also dear to His Majesty the King.
The Ambassador assured His Majesty of her commitment to continue and deepen the ties that have united the two countries for many years.