Ambassadors from Jordan, Argentina, Benin and Nepal have been officially recognised by Prince Albert and the government of Monaco.

On Thursday 29th April during a lunch organised at the Hermitage Hotel, Director General of the Department of External Relations and Cooperation Isabelle Rosabrunetto received Ambassador of the Hashemite Kingdom of Jordan Makram Mustafa A. Queisi, Ambassador of the Argentine Republic Leonardo Costantino, Ambassador of Benin Eusèbe Agbangla, and Dipak Adhikari, Ambassador of Nepal.

The diplomats presented their Letters of Credence to HSH the Sovereign Prince in the morning ahead of the lunch.

Makram Mustafa A. Queisi, who graduated with a Masters in Diplomatic Studies from the University of Westminster (UK) and a Bachelor of Computer Science, began his career holding various positions in the Royal Palace in Amman. He joined the Ministry of Foreign Affairs  and from 2005 became Ambassador of several Central European countries before being appointed to UNESCO Portugal, the Holy See and France.

After studying Political Science and International Relations, Leonardo Costantino entered the Institute for the Foreign Service of the Nation which led him to a career in diplomacy. He worked for several years at the Ministry of Economy and Production, at the Embassy of Argentina in Uruguay and was Chief of Staff of the Undersecretariat of Development, Trade Promotion and Investment. He joined France as Head of the Economic Section of the Embassy and became Ambassador in June 2020.

Eusèbe Agbangla has carried out advanced studies in the field of International Relations in Benin, Cameroon, France and the United States. A career diplomat and politician, he held various positions in several ministerial cabinets and rose through the ranks of the MFA. In 2015, he became Ambassador of Benin to Denmark, with jurisdiction over Norway, Sweden, Finland, Iceland, Estonia, Latvia and Lithuania. He has been Ambassador of the French Republic since July 2020.

Holder of a degree in Law and Political Science, Dipak Adhikari joined the M.A.E. in 1987. He successively served in Calcutta, Washington DC, New Delhi and Abu Dahbi before becoming Ambassador of Nepal to France in 2019. He is also accredited in Andorra and Portugal and, in addition, is Permanent Delegate to UNESCO. 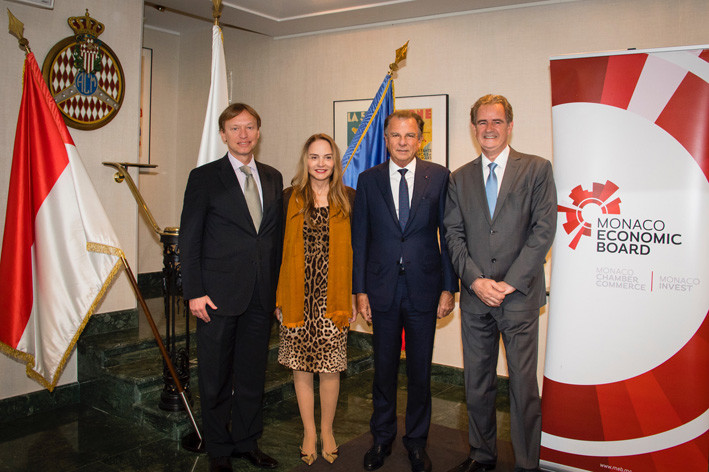 L-R: Ivan Orlic, Ambassador of Bosnia and Herzegovina to Monaco; Donatella Campioni, Honorary Consul of Bosnia and Herzegovina in Monaco; Michel Dotta, President of the Monaco Economic Board; Gordan Milinic, Director of the Agency for the Promotion of Foreign Investment in Bosnia and Herzegovina.[/caption] More than 50 economic players in the Principality participated on Wednesday, April 26, at the Ambassador's Lunch of the Monaco Economic Board (MEB), devoted to Bosnia and Herzegovina. The country’s Ambassador, HE Ivan Orlic, said that his country is not only a crossroads of cultures that has shaped Europe, but also a place of opportunity for investors. In 2016, Bosnia and Herzegovina filed an official application for membership of the European Union. Its currency – the convertible mark – is pegged to the euro. After a one-off slowdown in 2014, the country is again enjoying growth of more than three percent and optimism is high for the next few years. The World Bank's annual “Doing Business 2016” ranking confirms this, as Bosnia and Herzegovina has moved from position 131 to 81 in three years. At the lunch, Ambassador Orlic also highlighted the main sectors that could provide opportunities for investors: agriculture, with a very promising niche market in medicinal herbs; tourism, rich in the variety of cultures and landscapes; the development of infrastructure that benefits from heavy foreign financing, and the banking sector, which is undergoing consolidation in which many European banks have already invested heavily. Gordan Milinic, Director of the Agency for the Promotion of Foreign Investment in Bosnia and Herzegovina, described the strengths of his country. With an average monthly salary of €400, the cost of labour, linked with attractive regulations for companies and very modest inflation, are convincing arguments for investors. The signing of free trade agreements with the EU and many other countries has facilitated the development of trade relations. MEB President Michel Dotta stressed that trade between Monaco and Bosnia and Herzegovina should be developed. This conference could well be an important step in the economic rapprochement of the two countries, he said.

Business & Finance Stephanie Horsman - May 12, 2022
The Monaco Yacht Show is changing tack this year, looking to Millennials as the next big market to target with a new advertising campaign.