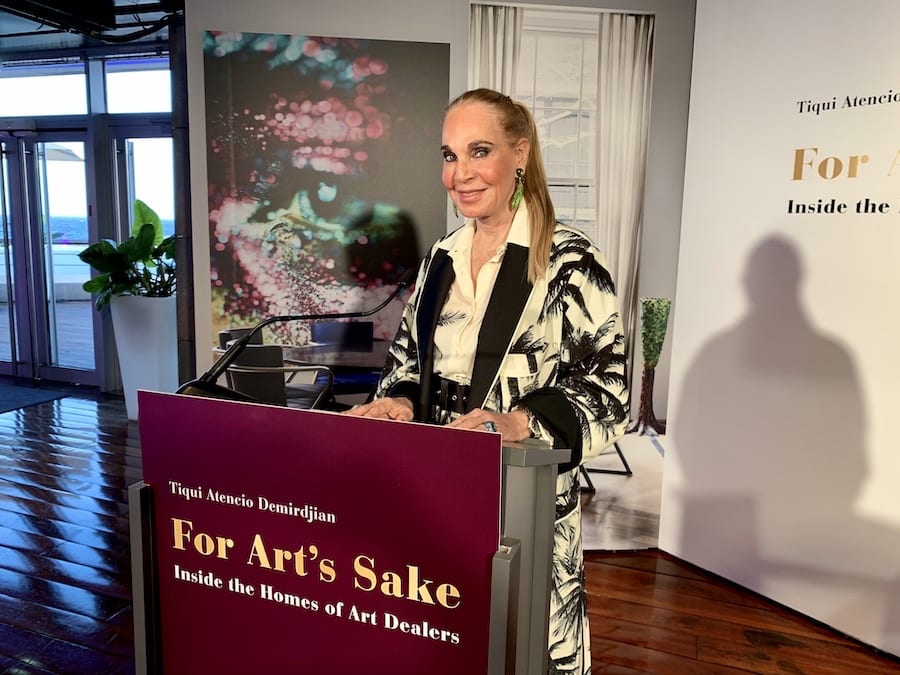 Monaco-based art collector Tiqui Atencio Demirdjian has launched her latest book ‘For Art’s Sake: Inside the Homes of Art Dealers’ at the Grimaldi Forum in the presence of Prince Albert.

The book takes readers from New York to London, Brussels to Los Angeles and Sao Paolo to Monaco, into the private residences of the greatest and most illustrious names in the art world.

Its author, Tiqui Atencio Demirdjian, is a leading collector of modern and contemporary art and 20th-century design, who moved to Monaco four years ago. Over the space of almost four years, she was given unprecedented access to the homes of 24 of the world’s most prestigious art dealers. Through images captured by photographer Jean-François Jaussaud, she gives life to enthralling contrasts, echoes, and unexpected dialogues by juxtaposing unparalleled art collections with interiors designed by the most renowned names including Annabel Selldorf, Peter Marino, François Marcq, Jacques Grange, Toshiko Mori, and many more.

The result is a gallery of striking beauty, most of which is revealed to the public eye for the very first time.

Tiqui Atencio Demirdjian’s texts guide the reader through these private spaces, while excerpts from exclusive interviews with the spaces’ owners, such as Dominique Lévy, Brett Gorvy, Almine Rech Picasso, Barbara Gladstone, Kamel Mennour, Axel and May Vervoordt and Adriano Ribolzi.

Monaco Life will soon feature the full interview with Tiqui Atencio Demirdjian, during which she talks about the origins of her passion, the extraordinary journey of art dealers, and Monaco’s position in the world of art.

Business & Finance Cassandra Tanti - October 15, 2019
Investment in art and cultural infrastructure hit €8 billion globally over the past three years, while technology and social impact investing are set to shape the art and finance market moving ahead. These are some of the latest findings of a Deloitte Art and Finance Report, unveiled on Monday in Monaco. The trend of including art and collectibles in wealth management portfolios and wealth reports is as strong as ever, according to the sixth edition of the Deloitte and ArtTactic Art and Finance Report 2019. Revealed at the Fairmont Hotel to more than 350 participants from 28 countries, under the presence of the Monegasque Minister of Finance and Economy Jean Castellini, this year’s 12th Art and Finance Conference focused on new collector trends in art and finance. [caption id="attachment_39316" align="alignnone" width="900"] 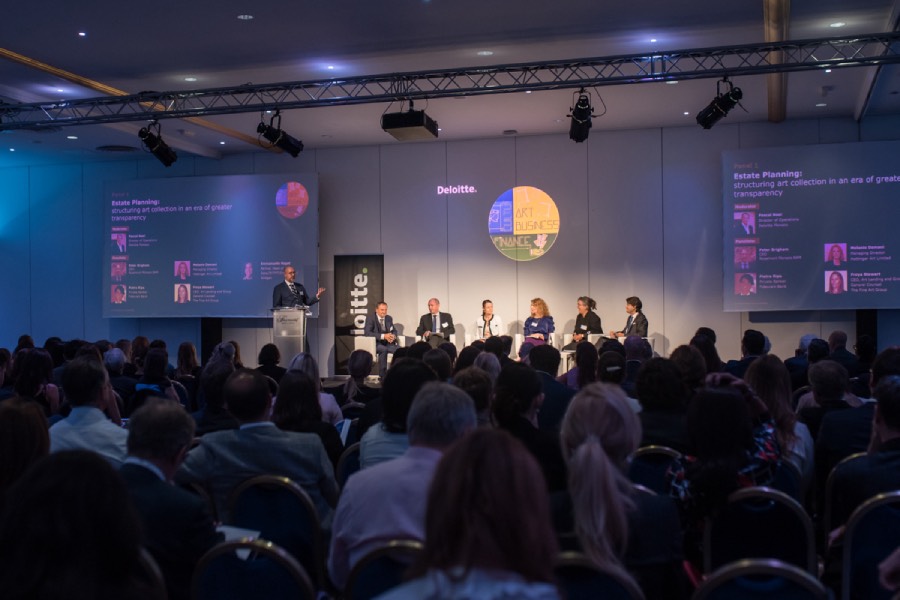 The 12th Deloitte Art & Finance Conference - 1st Panel on Estate Planning, photo credit: Cristina Corti Fotografia[/caption] Ultra High Net Worth Individuals’ wealth associated with art and collectibles was worth an estimated €1.57 trillion in 2018 and is expected to grow further. This year’s survey results show particularly high agreement among wealth managers, art professionals and art collectors that art is an important component of a wealth management service offering, an opinion that marks the strongest consensus on this point since the launch of the survey in 2011. However, despite the increase in the HNW population and a boosted interest in art as an asset, growth trends in the art market have been anaemic when compared to the growth in global wealth. “The findings reveal that lack of transparency is an ongoing concern for collectors, causing continued distrust in the market,” said Adriano Picinati di Torcello, Director and Global Art and Finance Coordinator at Deloitte. “In addition, a newer challenge derives from next-generation investors whose interests extend beyond financial returns to social impact. This year, we identified three trends that directly or indirectly look to address these concerns: technology, regulatory changes, and social impact investment models.” Technology as an accelerator for art and finance services Compared to the 2017 report, almost double the number of collectors surveyed (84%) and 76% of art professionals (up from 54% in 2017) believe technology will improve provenance tracking and the traceability of artwork. This view was also shared by wealth managers. Technology is being seen as a catalyst for change and growth to the art market, helping to innovate traditional business models. To support further development in this area, the report suggests that significant funding is needed to invest in ArtTech infrastructure and build the next generation of ArtTech companies. The benefits surrounding ArtTech startups include an increased transparency and trust, whether through blockchain technology, more data, better data analytics or artificial intelligence. One promising model to better combine tech investments with efficient long-term strategies is a development of an angel-investor network for ArtTech startups. “This angel-investor network would rely on art professionals and collectors who know the market, its functioning and particularities,” explained Mr Picinati di Torcello. “Such a network could be integral in directing money into those projects that address concrete issues within the art world, and align long-term expectations from investors, when providing better understanding of how the art market works.” [caption id="attachment_39315" align="alignnone" width="900"] 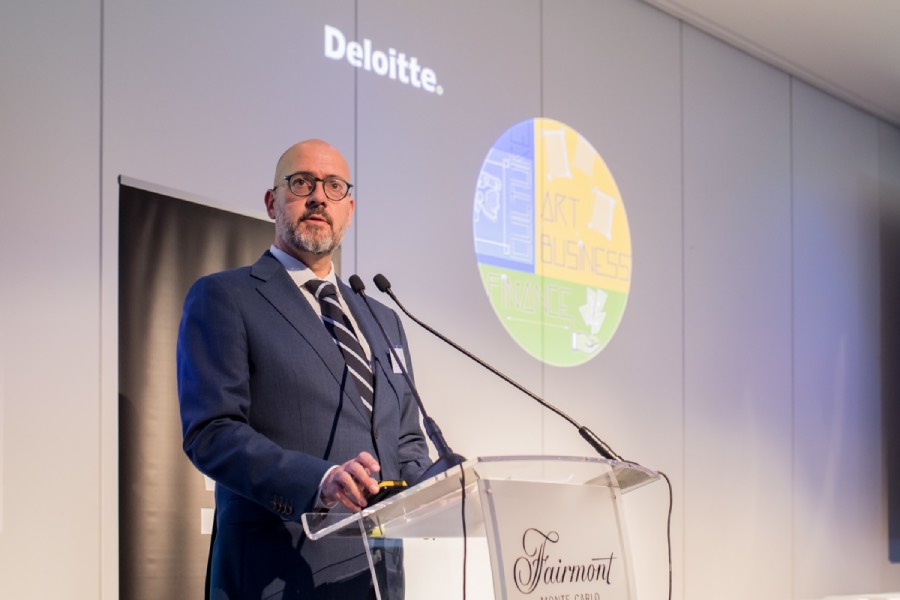 Adriano Picinati di Torcello, Director and Global Art & Finance Coordinator at Deloitte, at the 12th Art & Finance Conference in Monaco. Photo credit: Cristina Corti Fotografia[/caption] Regulations to instil trust In this year’s survey, 75% of collectors said that lack of transparency was one of the biggest threats to the reputation of the market, an increase from 62% in the 2017 survey, and marks the strongest consensus on this point since this question was introduced in 2016. For 85% of the private banks, money laundering is a key threat to the market’s reputation. Governmental regulatory changes may be the antidote to this condition, despite a lack of consensus among market stakeholders about the value of government regulation over self-regulation. The advent of the EU’s 5th Anti-Money Laundering Directive, coming into force in January 2020, may become a catalyst to fight this issue and inspire more regulations to come. The report suggests that collaboration between art and finance stakeholders is essential in order to develop common guidelines and standards to address the deterioration of trust in the art market. Social impact investment models experience steep rise For 65% of the collectors surveyed, art and philanthropy are among the most relevant services wealth managers can offer. Wealth managers seem to have responded to that trend with more than half stating they will focus on this area in the coming 12 months, up from 40% in 2017. “More and more art investors are keen to support products that have a positive impact on society and the world at large,” said Mr Picinati di Torcello. “New social investment models are required that focus on non-commercial art and cultural projects and institutions. One innovative investment or financing solution could be private-public partnerships. Such partnerships promise to turn public collections into assets with tangible returns so that public institutions have enough funding to fulfil their goals.” The full Art and Finance Report can be downloaded from the Deloitte Luxembourg website at: www.deloitte.com/lu/art-finance-report .

Culture Cassandra Tanti - November 12, 2020
'For Art’s Sake' by Tiqui Atencio Demirdjian is as much a window into the minds of the world's greatest art collectors, as it is a door into their elaborate homes.