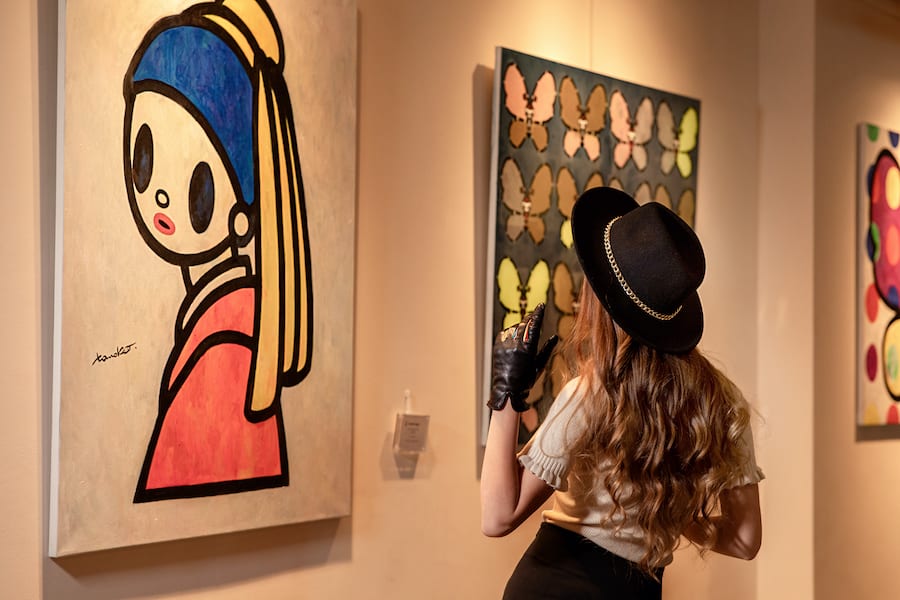 Espinasse 31 Contemporary Art Gallery has brought the works of Tomoko Nagao and Robi Walters to the Principality for the first time with an exhibition at the Meridien Hotel.
The exhibition, titled High Chroma / High Vigour, features Milanese-based Japanese artist Tomoko Nagao and London born and bred artist Robi Walters.
The works have been curated by Antonio and Thomas Castiglioni, and bring together the two artists, highlighting their unique styles and expressive vitality.
“The exhibition is an exploration of fundamental properties of art—colour, material, dimensionality, symbolism—and how they make us feel. High Chroma / High Vigour creates a space in which Tomoko and Robi’s creations coexist and balance each other, focusing on their common expression of energy through colourful displays,” explains the gallery.
Art is meant to evoke emotion, say the organisers, and to this end the exhibition hopes that visitors view the works through their relationship with the artist rather than as objects to be simply looked at.
Tomoko Nagao is known as one of the leading figures in the international Micropop art movement. She started studies in her home country of Japan before moving on to London where she attended the Chelsea College of Art. This is where her personal style was developed, and her popularity has been on the rise ever since, boasting shows at the Victoria and Albert Museum as well as various events in Italy and Japan.
She takes aim at consumerism by referencing high-end luxury brands and corporations, reminding audiences of “the energetic brightness in symbols of capitalism, such as advertisements.”
Robi Walters is a contemporary artist based in Soho, London. His colourful collages have attracted the attention of celebrity collectors such as Thandie Newton, Usain Bolt and Jillionaire, to name a few.
In 2018, Michelin-Star Chef Tom Kerridge commissioned Walters to create bespoke works for his restaurant Kerridge’s Bar & Grill at London’s Corinthia Hotel. In 2020, he was invited by Aston Martin to become their artist in residence. Walters has been named by The Telegraph as one of the top creatives in the UK, going on to win the ‘Arts and Culture’ category in the newspaper’s ‘Amazing 15’.
Walters’ work has encapsulated the spirit of transformation. By constructing mixed-media pieces with unusual materials, such as packaging from household items and broken vinyl LPs, he focuses on the practice of taking discarded objects and making them beautiful to revivify their intrinsic worth—with a creative process and product that is reminiscent of both pop art and arte povera movements.
Both artists works are hopeful and vibrant, mirroring the new hope of a return to normalcy in daily life after more than a year of pandemic conditions.
The exhibit will be on display at the Meridien Hotel until 7th June.