Monaco-based Scorpio Bulkers has received a commitment from ABN AMRO Bank N.V. and Norddeutsche Landesbank Girozentrale for a loan facility of up to $60 million.

The loan facility has a final maturity date of five years from drawdown date and bears interest at LIBOR plus a margin of 2.25 percent per annum. This loan facility, which is expected to close within August, would increase the company’s liquidity by approximately $21 million after repayment of the vessels’ existing debt.

The terms and conditions are similar to those set out in the company’s existing credit facilities and the loan facility is subject to customary conditions precedent and the execution of definitive documentation.

Scorpio Bulkers Inc. has an operating fleet of 57 vessels consisting of 56 wholly-owned or finance leased drybulk vessels (including 19 Kamsarmax vessels and 37 Ultramax vessels), and one time chartered-in Ultramax vessel.

Culture Cassandra Tanti - April 15, 2021
Restaurants and bars will open terraces from mid-May in the first phase of a three-stage reopening in France, if the government follows this proposed timeline.

Meet the Ministries: Minster of Health and... 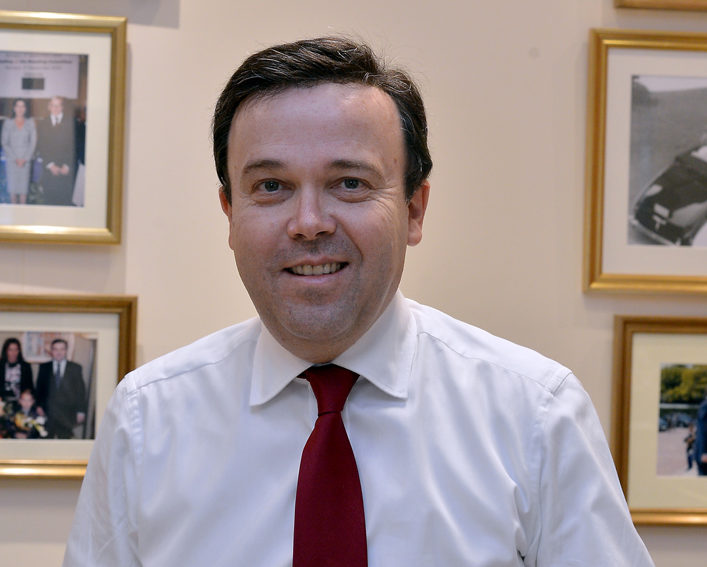 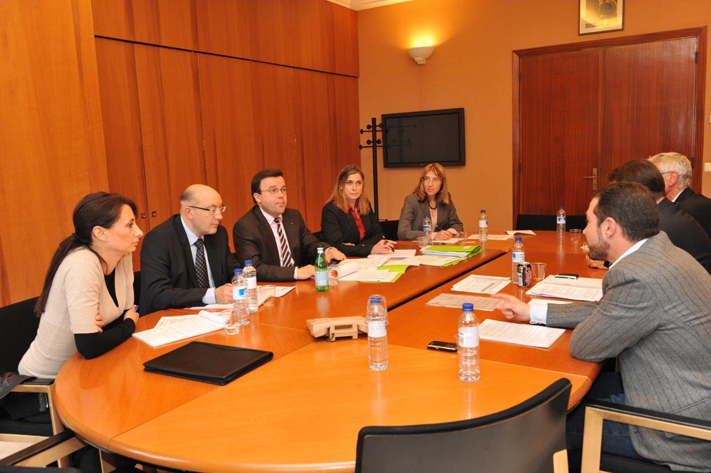 The Minister in a meeting with his team.[/caption] The Monaco government is made up of only five ministries, or departments, and the role of each is naturally broader than in larger countries where there may be 20 or 30 ministries. The department of Minister for Social Affairs and Health, with some 3000 people attached to it, includes around 300 public sector workers and 2700 hospital staff, comprises three areas: Work, Health and Social Affairs. Work covers employment services, and work inspection, making sure, for example, that job seekers find work, that laws concerning employment and work conditions are respected, that employees are not exploited. It also covers the administrative supervision of the Monaco labour court. The second area, Health, includes administrative supervision or participation in the management of Monaco’s public hospital and medical centres, and in drawing up and implementing Public Health policies. The third area, Social Affairs, concerns social security such as health insurance and retirement as well as social services. I tell the Minister about the various people that have commented to me, saying it’s difficult to imagine a need for social services in Monaco. “Monaco is, in fact, a very mixed society,” he elucidates. “It’s true that Monaco has a high proportion of wealthy foreigners. Out of 37,000 inhabitants, there are today around 9000 Monegasques and about the same number of enfants du pays, those who were born and have grown up in Monaco, but who do not have the nationality.” There are two ways to obtain the Monegasque nationality: to be born or married to a Monegasque national or to be granted the nationality by the Prince. The majority of the enfants du pays are French and then there are a few hundred Italians, and some British, Belgian, Swiss … The rest of the population, between 18,000 to 19,000 people are wealthy foreign residents: Italians (7000), Belgians (1000), Swiss and Germans (1000), Americans (270), and about 500 Russians. It’s no secret that to settle in Monaco if you are not Monegasque, or born in Monaco, necessitates a certain amount of wealth. But not all the population is well off. “Many are public sector workers or employees of SMB or the private sector with ‘normal’ salaries,” explains Minister Valeri, who is very much a family man in his spare time. “There’s a tendency to focus only on the rich foreign population in Monaco. There are very few Monegasques who can afford to pay €10,000 rent per month.” Like in every country, social security depends on your work status rather than your place of residence. If you are employed in Monaco (there are 50,000 employees versus the 37,000 inhabitants in Monaco), you pay into and are therefore covered by the Monegasque social security. If you are self-employed, or a public sector worker, you pay into a different caisse, but you are still covered. And the same thing for your retirement pension. What complicates matters with the latter is that careers are often mixed. That is, you could work for ten years in Monaco, and then in France, or other countries. In that case, each regime pays a proportion of the pension. There are also around 300 individuals with disabilities in Monaco, including children, adults, workers, non-workers. I mention to the Minister, whom I learn, much to my delight, is a fellow swimmer, that I see him everywhere, from WHO conferences, to hospital press conferences to programme launches at the University of Monaco (the following morning he’ll be at the start of No Finish Line, and it’s not unusual for the Minister to have obligations on a Saturday or Sunday). I ask him to expand upon some of the department’s current campaigns. [caption id="attachment_8572" align="aligncenter" width="709"] 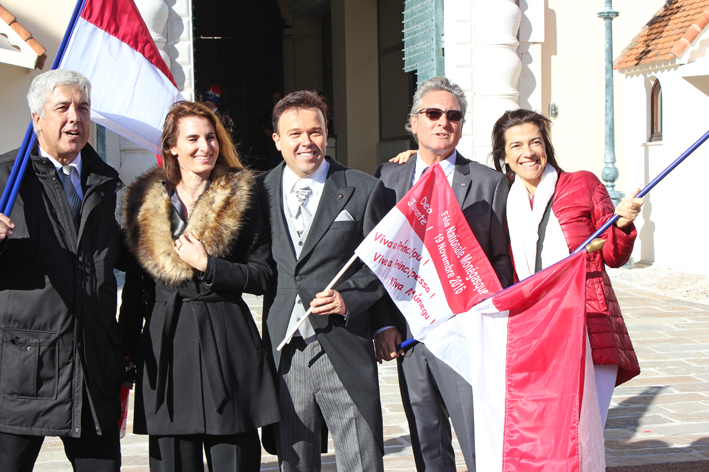 Celebrating Monacos National Day November 19, 2016.[/caption] He starts with “No smoking November” (in French “Moi(s) sans tabac”), a movement first started in the UK in 2012 to encourage smokers to butt out. “We decided to join the campaign this year and benefit from the publicity of the France campaign. It has been found that a smoker who manages to stop the habit for 28 days has a five fold chance of stopping completely. Results from the UK also showed that during the month, 50% more smokers took the decision to quit, so it was worth trying.’ The campaign in Monaco offers a number of support services. There is a website, a telephone number to speak to a specialist, a free kit given out by pharmacies, and the ministry has doubled the number of free consultations with a doctor at the hospital, whose contract has been increased from part-time to full-time (appointment on +377 97 98 97 41). “We have also inaugurated a new piece of medical equipment at the hospital, a particle accelerator, used in radiotherapy, for which we invested more than €11 million, and a second device will be installed to allow treatment to be continued uninterrupted when one of the machines is being repaired or is out of action.” There are only four machines of this level of performance in France today. It allows a treatment to be tested on a mannequin before being carried out on the patient and it is so precise that it can treat tumours that were too small to treat previously. This means that more patients can be treated and at a much higher level of precision and so a higher chance of success. Does this encourage health tourism? “This is quite a recent development,” he acknowledges. “From the beginning of this year, we have created the Princess Grace Check-Up Unit at CHPG. We have three luxury suites with a medical coordinator, Dr Gilles Chironi, a specialist from the Pompidou Hospital in Paris. We have some amazing technical equipment at the hospital and high quality, multilingual medical staff. In the first months after its opening, we received as many local patients as foreign patients coming for a check up.” One of the government’s biggest challenges at the moment is the teleworking initiative, for which Minister Valeri is a relentless supporter. “This morning I met with all the chartered accountants in Monaco to convince them to suggest to their business clients to adopt teleworking. I have also met with other bodies such as Monegasque association for financial activities, the Junior Economic Chamber and FEDEM – the Fédération des Entreprises Monégasques – to promote the idea of teleworking, to persuade employers that teleworking represents an enormous opportunity.” The teleworking project was voted at the end of June 2016 but then requires three months for the Work Directorate to approve the project concerning work contracts, so the earliest it could have been implemented was end of September. The Minister breaks down the key components of teleworking, citing the main aim is to fight against the lack of space in Monaco. “Teleworking creates the possibility to transform the 40,000 houses and apartments of our workers living in France into offices, which in turn contributes to wealth for Monaco, through turnover, VAT and other taxes. It is a potential extension of 40,000 offices outside the Monegasque territory. It’s tremendous.” He says that this will allow companies to hire more employees without having to find additional premises and companies will make savings on the rental of office space. These are two of the main obstacles to economic development: lack of space and high cost of rents. “It will also allow the employees to save time, to improve their quality of life, to be less stressed, all of which will result in greater efficiency.” Studies carried out in France in 2014 showed that time saved through teleworking allows more time for sport, family life, sleep and that the main reason for a company to adopt teleworking is to improve the quality of life of its employees. “In France, 96% of companies that implemented teleworking on a trial basis wished to continue. It's a win-win situation. The employee is happy, and productivity has been seen to improve by 22%. Teleworking has zero negative impact on the social security cover of the employee; the company continues to pay the same social charges and the employee continues to pay the same income tax.” So if it’s a “win-win situation”, why are companies hesitant? “Because it is new and it involves change and we are, by nature, afraid of change,” the Minister points out. “The main concern is: how can I manage my employees if I can’t see them physically in the office, if I don’t know what time they arrive and leave?” Minister Valeri confirms that 30 businesses have expressed an interest, and ten have already put teleworking into practice. By the end of the year, the government hopes to have 100 teleworkers signed up. With so much success under his belt, I ask the Minister Valeri about future plans. “I have implemented the main projects that the Prince had asked me to do seven years ago. I was asked to launch a new hospital, to save the workers’ pension plan, to improve the employability of young people in companies in Monaco and finally to launch the teleworking project. I’ve done all of these things, so we will see what the future holds.” Article first published November 24, 2016. READ ALSO: Meet the Ministries IMSEE Director, Lionel Galfré: not just another statistic