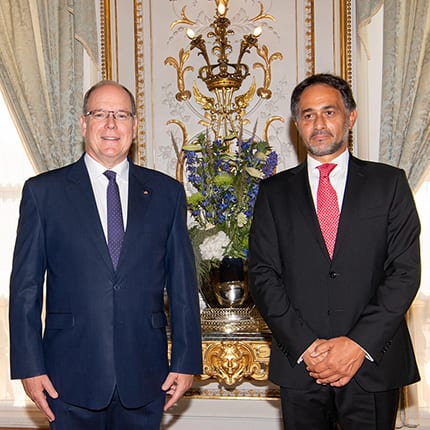 Giulio Alaimo has presented his credentials as the new Ambassador of Italy to Prince Albert.
After the ceremony on 16th September, Mr Alaimo was received by Minister of State Pierre Dartout in his residence for a lunch chaired by the Sovereign.
Giulio Alaimo graduated at the University of Rome La Sapienza in Political Science and began his diplomatic career in 1991. He worked at the General Department of Economic Affairs and continued his diplomatic work in various directorates before he was appointed in 2007 as First Advisor for Emigration and Social Affairs in Ottawa, then in Paris in 2009. From 2013, he exercisedhis duties at the General Department of Promotion of Sistema Paese. He also acted as Commissioner General for the Milan Worldwide Exposition in 2015. He was appointed first class Consul General in Zurich in 2016.
Giulio Alaimo steps in to the role previously held by Cristiano Gallo.
Photo Credit: Gaetan Luci / Princely Palace