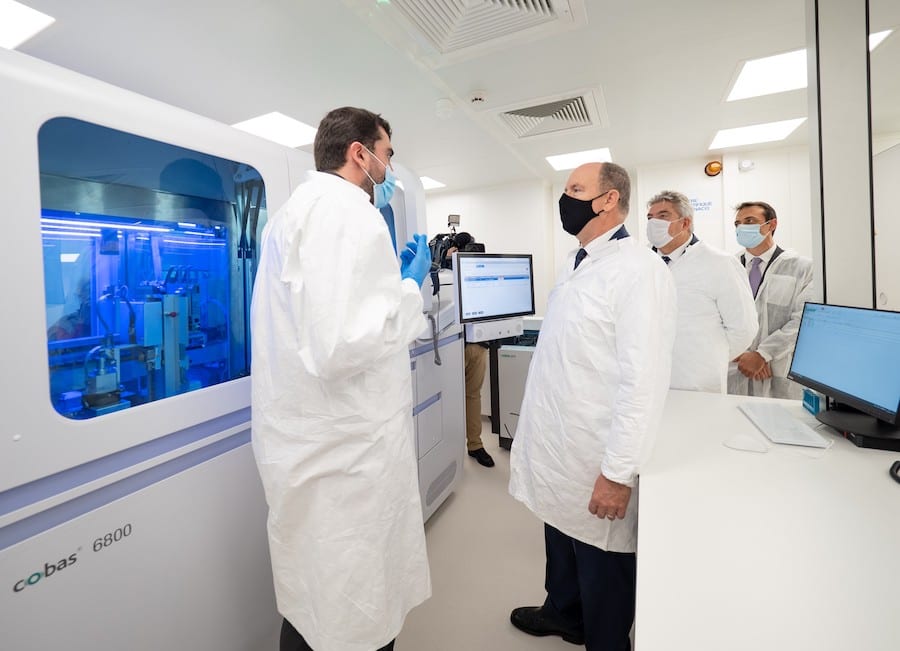 Prince Albert has just inaugurated a new laboratory at the Monaco Scientific Centre designed to significantly increase PCR testing capabilities in the Principality.
The Monaco Scientific Centre has been part of the fight against Covid since April 2020. Prior to then, the Principality was forced to send Covid tests and samples outside the border to be analysed, notably to hospitals in Nice, but often as far away as Marseille and Paris. This was a time-consuming process and often took up to 72 hours to obtain results, an excessively long time for a patient in urgent care.
As a fully modern facility, CSM was in possession of the equipment needed – machines called thermocyclers – to process PCR tests, and they quickly put themselves at the disposal of the government. The machines, along with a fully trained staff who knew how to use them, was an invaluable resource for the government in those dark early days of the health crisis.
Since 23rd April, the CSM has carried out virus detection tests, more commonly known as PCRs, right here in Monaco and have saved lives as a result. The centre processed tests in not days, but hours, allowing early diagnosis and helping medical workers assist patients more effectively.
Given the success of the CSM’s screening programme, the government has given them a “new mission”. This mission involves the operation of a new medical biology lab, extending the activities of CSM, which were initially restricted to observation, pure and applied research in the fields of science and medicine. The P3, as it is known, was inaugurated by the Prince on Monday.
It contains a new PCR testing machine, commissioned by the government in May, called the Cobas 6800. It is currently analysing 400 tests per day, which is the majority of nasal swabs taken in the Principality.
More so, the lab is now taking care of all the lab analysis normally undertaken at the Princess Grace Hospital Centre.
“This tool strengthens the mobilisation of all private and public laboratories in the Principality, which have been working tirelessly since the start of the health crisis to test as much as possible,” said Minister of State Pierre Dartout during the inauguration. “Since September, we have been ramping up our testing capacities. Today, the Principality is on the verge of becoming fully autonomous in terms of screening. This will allow us to develop an even broader and faster screening policy in the coming weeks.”
Faster tests
In order to minimise the time between the test result and its communication to a patient, the Interministerial Delegation for Digital Transition has developed, with Roche Diagnostics, the CHPG and CSM teams, the digitisation and automation of the testing process.
This should halve the time between sampling and communication of results, reducing it to between 12 and 24 hours, compared to 36 hours previously.
This digitization puts Monaco at the highest level of international standards. “The digital integration … will drastically reduce the time it takes to make results available, offering a better patient experience in a time of great anxiety and making all the data available to decision-makers in real time,” said Frédéric Genta, the Interministerial Delegate for Digital Transition.
“Beyond a rapid return to the patient, this will allow the government and the health authorities to have reliable and complete data to make the best decisions for the Principality,” added Minister of Health Didier Gamerdinger. “It is therefore very comprehensive equipment that allows us to give a new impetus in the fight against the virus.”
Modernised laboratory
The Monaco Scientific Centre had to be specially fitted out in order to accommodate the new equipment – and it had to happen within a tight deadline.
“It was a major challenge, the teams worked day and night to respond to the health emergency,” said Minister in charge of Equipment, the Environment and Town Planning Marie-Pierre Gramaglia.
Expanding the future of CSM
The laboratory adds a new dimension to the Scientific Centre of Monaco, which has reoriented its primary mission to respond to the fight against the coronavirus.
“First, we will use the Cobas 6800 to analyse nasopharyngeal (nasal) samples during the Covid-19 pandemic,” explained CSM President Professor Patrick Rampal. “But we are in the process of validating other sampling methods for PCR tests, in partnership with the CHPG. I am thinking, for example, of oropharyngeal (throat) samples which could soon replace nasopharyngeal samples.”
But the CSM is also thinking about the post-Covid era and is considering new uses for the equipment, including the analyses of the HPV (Human papillomavirus). “It is to be commended the ability that the CSM had, in the spring, to reorganise itself to meet the health needs of the Principality,” concluded Minister of the Interior Patrice Cellario. “It is demonstrating its ability again today by being part of the future and already preparing new perspectives for research and analysis.”