The Principality is taking its commitment to the environment one step further with the introduction of a fleet of 100% electric rubbish collection trucks.

Prince Albert II and Minister of Equipment, Environment and Town Planning Marie Pierre-Gramaglia were on hand in the Place du Palais Wednesday for the unveiling of the Société Monegasque d’Assainissement’s (SMA) newest vehicles. Rubbish collection in Monaco will now start to be more environmentally-friendly with the addition of several trucks that are 100% electric.

“From this week, four new electric rubbish trucks will run during the night and two to three in the morning. By the end of the first trimester, all household waste and all glass will be collected by 100% electric vehicles,” Thomas Battaglione, president of SMA, said during an interview with the government channel Monaco Info.

“They are really quiet, so you have to be careful,” joked the Prince, before saying, more seriously, that these new trucks “are better for the quality of life” in the Principality.

Rubbish collectors will be trained to handle the new trucks, as they differ slightly from the traditional ones.

Photo by Stéphane Danna for the Government Communication Department 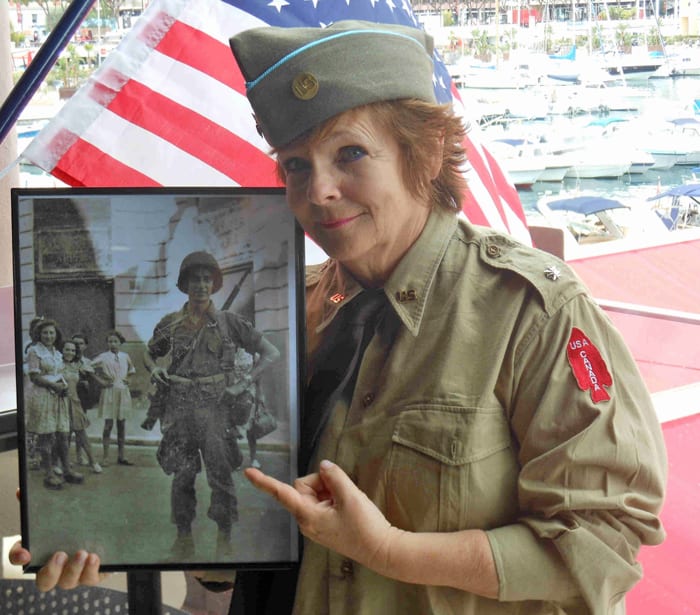 Annette Anderson of Stars'n'Bars with a photo of an American GI standing outside the iconic Van Cleef & Arpels taken during the liberation of Monaco from the German army in 1944. The Liberation followed the Allied landing near Nice on August 15, as well as the allied aerial bombardments, which badly damaged the port area of Monaco. On September 3, the American 517th Parachute Combat Team arrived in Monaco.

According to popular legend, a jeep with two American GI’s drove into Monte Carlo and pulled up to the Tip Top Bar, where one of the GIs, the future-author Irwin Shaw, jumped out, ordered some drinks and announced that Monaco had been liberated. In no time at all, crowds of Monegasques were crowding around the Americans to express their thanks.

On Saturday, September 3, the MonacoUSA Association will celebrate the 72st anniversary of the Liberation of Monaco during WWII with a special dinner show with music of the 1940s. Local artists performing include the Lib Day Darlings (Alicia Sedgwick, Colette Marx-Nielsen and Louise Harrison), London West End performers Paul Spicer and Matt Firth and local crooners Carl Henry and Mike Lorimer, who will recreate the atmosphere of the 1940s with wartime jazz hits by the Andrews Sisters, Ella Fitzgerald, Frank Sinatra and Billie Holiday.

The event will start at 6 pm in the StarDeck at Stars’n’Bars and will include a variety of animations, including a free tombola, swing dance contest and prizes for the “best 1940s look”.

An entrance fee of €15 will include the two-hour show as well as a glass of wine, beer or soft. Tickets on sale here. There is a limited number of seats available and guests can reserve tables for dinner by contacting monacousa.mc@gmail.com

MonacoUSA will be present at the memorial ceremony at the cemetery in the late afternoon and lay a wreath to pay its homage to French Resistance fighters executed by the Gestapo in 1944 prior to the Liberation of the Principality by the American Army.