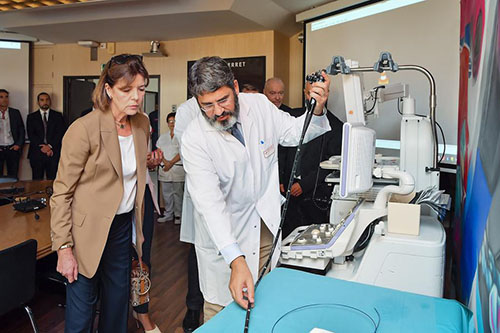 Caroline, Princess of Hanover has inaugurated a new piece of equipment funded by GEMLUC that will be used in the fight against cancer at the Princess Grace Hospital.

The radio-frequency generator treats pancreatic cancers through the use of an oral echo-endoscopy, a technique which avoids the need for surgery and thereby lessens the risks for elderly and frail patients.

Following a donation of €55,000 from GEMLUC, the CHPG was able to finance the equipment. Its inauguration this week was held in the presence of Minister of Social Affairs and Health Didier Gamerdinger, Chairman of the Board of Directors of CHPG André Garino, Director of CHPG Benoîte de Sevelinges, and President of GEMLUC François-Jean Brych, as well as representatives of the association and doctors Rémy Dumas, Antoine Charachon and Jean-François Demarquay.

GEMLUC was founded in Monaco in 1973 and is made up of Monegasque businesses. So far, the association has raised more than €1.6 million for the fight against cancer, including the distribution of grants for research, scholarships for young doctors, cancer care and prevention materials, as well as support for local cancer care associations.