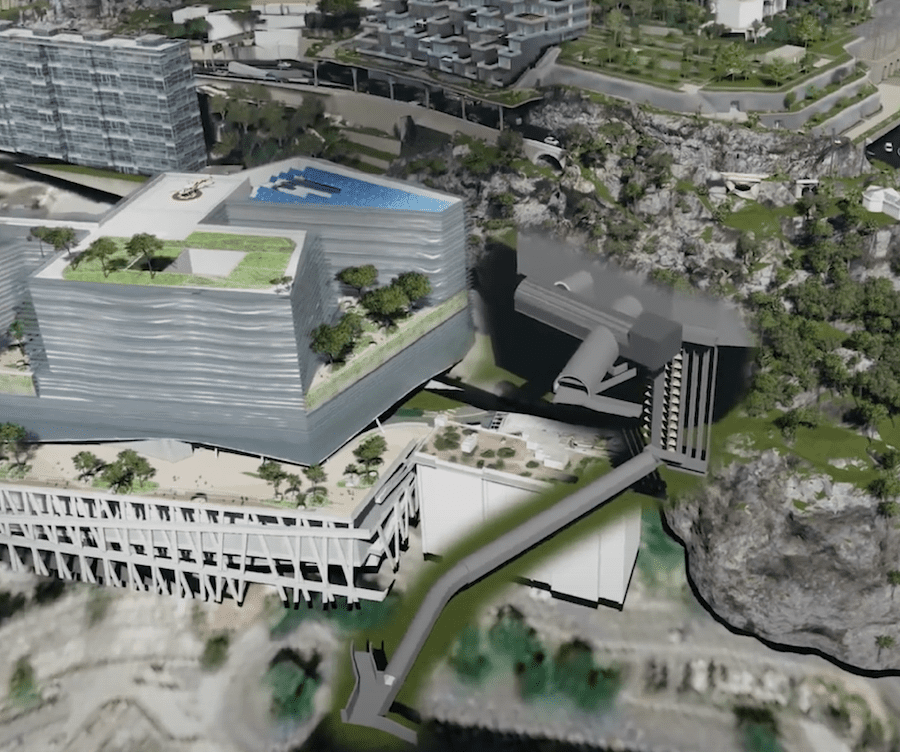 A pedestrian tunnel that will link Fontvieille to the top of Boulevard du Jardin Exotique is well on its way to completion with the use of ingenious engineering and brute force.
The new underground pedestrian tunnel, dubbed Les Salines (The Saltworks) has a completion date set for 2023.
The company behind the project, Engeco, is no stranger to large, difficult projects in the Principality. They previously worked on the new railway station, the heliport, the new land extension and the tunnel between Monaco and France.
At the starting point of the tunnel will be a large car park, which has been under construction across from the Exotic Garden entry since 2017. A lift will transport people 15 floors down to the underground gallery that runs 130 metres long and leads to the bottom of Avenue Pasteur, where it transitions to an outdoor path. The 200-metre path will end at Avenue de Fontvieille.
There will be a deviation near the top that allows people to access the Princess Grace Hospital parking garage from the same tunnel.
According to a report by Monaco Matin, nearly half of the 130-metre tunnel is completed. In order to create the walkway, a massive amount of rock must be removed, and workers are using dynamite to blast through the sediment, though this subterranean world won’t be much noticed by those above ground. These blasts move works ahead by roughly a metre a day.
Once the tunnel is complete, the elevator shaft will be built.
The total amount of earth needed to be moved to create the tunnel is estimated at 300,000m2, with 960 tonnes of steel reinforcements and 7,800 m2 in diaphragm retaining walls.
The car park will have 1,819 spaces on 15 levels and will cover 61,000m2 of surface area.
The underground passageway will be decorated with the ceramic animals made by Roger Capron in 1968 that once lived at Larvotto beach. There will also be 10 digital screens integrated into the walls.
The tunnel comes amid a larger Jardin Exotique construction project which will eventually include 66 apartments and four commercial premises, a building for office us, public grounds and more.
The work is expected to be completed in the first half of 2023.